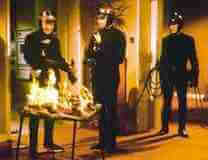 Whoa! If democracy gets any more advanced in Turkey, scientists will need to start modeling it with partial differential equations. What’s so advanced and innovative about the way they’re&nbsp;hunting down every copy of this book, democratically speaking, is that the book–I mean, the obstacle to democratic advancement–hasn’t even been published yet. They’re hunting down every draft of this obstacle to democratic advancement:&nbsp;

Police searches for possible drafts of what was said to be an unpublished book by journalist Ahmet Şık extended to the offices of daily Radikal on Thursday. Officers who went to&nbsp;the Hürriyet Medya Towers building asked for copies of the ‘The Imam’s Army’ draft from journalist Ertuğrul Mavioğlu based on a court decision that called it an ‘illegal&nbsp;organizational document.’

Police operations against copies of a “draft book” spread to the offices of a mainstream newspaper for the first time Thursday, as officers raided the headquarters of Radikal, a sister&nbsp;newspaper of the Hürriyet Daily News.