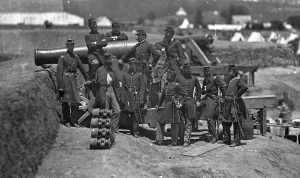 Perhaps none did so more frequently and with such significant consequences than George B. McClellan, arguably the worst commander in U.S. military history, a man who never missed an opportunity to be wrong with a spectacular inability to recognize it.

As Major General of the Army of the Potomac in 1862, McClellan was poised to bring a swift end to the American Civil War, yet his astounding proclivity for misjudgment was unparalleled. That is, until last week, when 140 former military and national security officers penned an open letter to Congress about the events of January 6 at the Capital.

In classic McClellan style, they managed to get almost everything wrong, and dangerously so. As Ricochet member Jim George explains in greater detail in another post, this letter is full of lies from top to bottom. At this point, all Americans should question the integrity of any government institution or its officers.

But this isn’t new.

“I am utterly amazed to find so little real faith and courage under difficulties among public leaders and men of intelligence.”

We civilians tend to think of the military as the last bastion of honor and professionalism in government, an organization above petty politics that rejects the nonsensical whims of blowhards of all persuasions.

Truth be told, every veteran just rolled their eyes reading that. They know better than anyone that the more you study the military, the more you realize it is just as populated by dingbats as any organization.

In fact, given its size and mission, the U.S. military and national security apparatus may host the largest collection of dingbats on earth – in sheer numbers that is, not in proportion to the whole; that distinction is still held by Congress, Hollywood, and the teachers’ unions – and in that order.

Like General McClellan, these individuals will be condemned by the cold facts of history but I’m not willing to wait that long. They need to be called out now, their lies need to be sacked before they can manifest into unholy action against the very country they claim to care about. Failure to do so will cost actual physical lives.

“War is not just armies, and battlefields, and clever campaigns laid out on a map and ratified in blood. It is a resort to force, to be sure, but which is to say that men have temporarily abandoned the effort to exert a reasoned control over events.”

Losing reasoned control over events is exactly what those 144 former military and national security officers have done. It’s a deadly and contagious virus among policymakers that leads them to fail to examine the reality around them. Perhaps they’re simply deceived. But leaders are held with a higher standard by God and by man. Blindly accepting squeamish reports of cowards and sycophants will cost lives. Like McClellan, they will end up cowering and retreating from forces that don’t even exist.  Or worse, targeting the wrong individuals.

In the summer of 1862 with nearly a two-to-one advantage, McClellan was prepared to take the Confederate capital of Richmond. Confederate General Robert E. Lee feared this, but he also knew McClellan. Lee decided to thin his lines in front of Richmond to next to nothing and throw the bulk of his army into McClellan’s flank, deceiving his opponent into overestimating Confederate strength and scaring McClellan into a retreat.

With Confederate defenders thinned along thirteen miles, Richmond was there for the taking. Had McClellan advanced, he would have easily overwhelmed the capital’s minuscule defenses, arrested the Confederate government, and likely ended the war three years early. But instead, McClellan took the bait. He abandoned his fortified position and, calling for even more reinforcements, characteristically blamed everyone else for his ineptitude:

“I have lost this battle because my force was too small. I again repeat that I am not responsible for this, and I say it with the earnestness of a general who feels in his heart the loss of every brave man who has been needlessly sacrificed today…If I save this army now, I tell you plainly that I owe no thanks to you or to any other persons in Washington.”

The loss of reasoned control over events has infected much of our leadership. We can defeat this virus the way we defeat all enemies, with intelligence. Ride out and see for yourself if the reports are accurate or artificially (perhaps intentionally) inflated. Does the data line up with reality? Use your instinct, trust your eyes, verify their claims, and get that information to the leaders who need it. Be willing to stand on reason no matter what the so-called experts claim, and give your leaders the intelligence they need – or find new leaders.

It’s getting harder and harder to discern the truth every day, but for all the static and competing claims blanketing the airwaves you can always rely on your God-given ability to reason. Don’t be afraid to confront those vile prognosticators whenever they pop up, no matter what credentials they sport, even if those credentials include five stars on the shoulder of a once-respectable leader. History will put them in their proper place eventually. But for those on the front lines defending liberty, unchecked lies are a cost too great to bear.