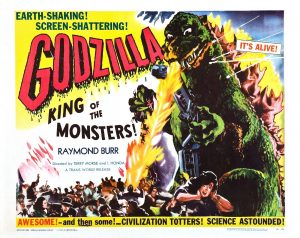 What could possibly go wrong here? Japanese scientists, with the approval of government officials, will dispose of radioactive waste water from the decommissioned nuclear power plants at Fukuyama by dumping it in the Pacific Ocean. This is not from the Babylon Bee, nor is it a belated April Fool’s story. It is a tale of our time, playing on our distrust of asserted expertise and asserted public interest. The power of the story also depends on a belief in zero risk options, indeed of magical cake that all may enjoy while continuing to have. Oh, and the story has deep international cultural significance.

I ran across the story through InfoWars, hosting a ZeroHedge column. So, trust but verify. Strait Times? Check. Business Insider? Check. The Sun? Check.

The cooling water that has been accumulating at the crippled Fukushima Daiichi nuclear power plant in Japan will be released into the Pacific Ocean after it has been treated to remove all harmful radioactive substances, Prime Minister Yoshihide Suga’s Cabinet decided yesterday.

It is part of the nation’s plan to decommission the power station that was destroyed in a 2011 tsunami, causing one of the worst nuclear disasters in history.

Japan had previously warned that it was running out of space to contain the more than 1 million tons of treated contaminated water in storage tanks on-site.

Over one million tons of radioactive water has been collected so far, including water to keep the melted reactor cores cool while they rust in the Sun.

We have seen distrust of authority, in the form of institutions and public officials, grow since at least the end of the LBJ administration. This past year’s pandemic public safety theater, with Dr. Fraudci and the Great Scarfini at the head of a group of bobbleheads, is just the latest instance of ideological predetermination of the narrative of expertise and trust. Americans’ popular suspicion of nuclear power goes back to Three Mile Island and the commie approved The China Syndrome. You know, the Hanoi Jane propaganda vehicle.

Japan, on the other hand, has a far deeper source of distrust about all things atomic. It was 1954 when something rose out of the sea because of man’s meddling with nature, Gojira:

It was a matter of national necessity, before cheap and plentiful natural gas, that drove Japan to build a power grid for half the nation based on nuclear power. Then a tsunami, on an earthquake-prone coast, revealed a disastrous design flaw or at least terribly designed emergency procedures. That was ten years ago, a full decade, and the democratic process, influenced by the Chinese Communist Party and Czar Putin’s agents, was paralyzed for all this time.

Finally, some technical, bureaucratic, or political tipping point has been reached. The “experts” now say that disposing of nuclear waste in the ocean can and will be safely done.

Despite the backing of the International Atomic Energy Agency (IAEA), the plan has met with vehement opposition from local fishermen who fear the damage on the reputation of marine produce.

Releasing the treated wastewater in the ocean would dilute [tritium] well below standards set by the World Health Organization, the cabinet secretary Katsunobu Kato said.

According to the US Nuclear Regulatory Commission, tritium is fairly harmless in small concentrations, but as the concentration of the particle increases, so does the risk of cancer.

“The Japanese Government’s decision is in line with practice globally, even though the large amount of water at the Fukushima plant makes it a unique and complex case,” the International Atomic Energy Agency said in a statement on Tuesday.

Of course, this will all work out just fine:

Turning back to the Zero Hedge story reveals a universal inclination towards magical thinking. The author sets up a contrast between pipeline safety claims from the left and approval of nuclear waste dumping in the ocean.

We live in a bizarre world: one where the the Keystone XL pipeline must be shut in case of a hypothetical (and extremely unlikely) leak, but where Japan is allowed to dump over one million tons of radioactive water into the Pacific Ocean. Actually, it’s either bizarre or simply exposing just how profoundly hypocritical, self-serving and corrupt the ESG/Green/Greta Thunberg theater truly is.

Both of these alleged concerns get traction because we do not want to accept any level of risk outside of our self-chosen personal activities. Consider the decades America has been paralyzed over storage or disposal, perhaps through reprocessing, of spent nuclear fuel components. Consider the massive regulatory and lawfare hurdles authorized by Congress in the name of environmental safety. We want magically delivered luxury, redefined as an entitled necessity. This past year worked for the elite because a critical mass of the public in democratic societies wanted safety without any clearly articulated trade-offs.

This is not to discount the fishing communities’ concerns about economic devastation due to the destruction of their reputation. Say “radioactive waste” together with “Pacific Ocean” and you get people striking postures of fear and invoking safety as they refuse to purchase fish from those fishermen associated with the name of the site of the origin of the waste, Fukushima.

What could possibly go wrong?

Well, this is Japan. The political and technical elite gave themselves two more years to carry out this course of action that is supposedly forced upon them. We could see a change in government and more muddling through. We could see China use this as a pretext for more regional aggression. Then again, we could seen . . .

The original Japanese version of the 1954 Gojira (Godzilla) is available for free viewing on the Internet Archive.

You know that if I’ve rolled out a monster movie the bears and disco music cannot be far behind. Save Ricochet! Save yourself! Sign up today!

There are two major monthly Group Writing projects. One is the Quote of the Day project, now managed by @she. This is the other project, in which Ricochet members claim a day of the month to write on a proposed theme. This is an easy way to expose your writing to a general audience, with a bit of accountability and topical guidance to encourage writing for its own sake.