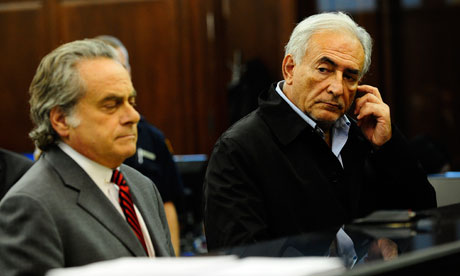 These days, as Claire’s father points out, a fair number of Frenchmen are upset. Many, in fact, have fallen prey to a frenzy of fear and loathing. One can hardly blame them. The image of Dominique Strauss-Kahn – who was three days ago a leading Presidential contender in France – doing the perp walk in Manhattan is the sort of thing that would set on edge the teeth of almost any of his compatriots, and they are none too happy that he is being held without bail on Rikers island. No public figure in France has in recent times been subject to anything like this. Justice there is reserved for the little people.

As Dominique Moïsi put it in an op ed&nbsp;in The New York Times, “Disbelief, shame, humiliation … the French have no words left.” Here are reactions reported&nbsp;in that newspaper by Steven Erlanger and Katrin Bennhold:

[Former French Justice Minister] Élisabeth Guigou, said she found the photos of Mr. Strauss-Kahn in cuffs indicative of “a brutality, a violence, of an incredible cruelty, and I’m happy that we don’t have the same judiciary system.”

Ms. Guigou, a Socialist like Mr. Strauss-Kahn and a member of Parliament, told France Info radio that the American system “is an accusatory system,” while in France, “we have a system that takes perhaps a little more time but which is, despite everything, more protective of individual rights.”

Max Gallo, a prominent historian and commentator, agreed that the two systems were different. “It’s the first time in the history of France that a top-level figure is treated like a common criminal whose guilt is already established,” he said. “But it also manifests an egalitarianism in the American justice system that surprises us in France.”

He said, “People are asking, ‘Was it really necessary to do that?’”

The images struck several commentators as being more akin to scenes from American television crime dramas — dubbed versions enjoy tremendous popularity in France, among them “C.S.I.,” known as “Les Experts,” and “Law and Order,” known as “New York Police Judiciaire” — than from French life.

“It was images from Greek tragedy mixed with those of American TV series,” the centrist politician François Bayrou said at a news conference. “Everyone who has seen these images has had their throat tighten, they were so arresting and confounding. It’s the destiny of a man that is toppling, with very important consequences for himself, his party, his country.”

Others unmentioned in the Times&nbsp;are less restrained. Gilles Savary, a Socialist deputy in the European Parliament, wrote on his blog: “To tell the truth, everybody knows that Dominique Strauss-Kahn is a libertine; what distinguishes him from plenty of others is his propensity not to hide it. In Puritan American, impregnated with rigorous Protestantism, they tolerate infinitely better the sins of money than the pleasures of the flesh. It would be easy to trap a personality so unresistant to feminine attractions as D.S.K.” No one, however, has been as outspoken as Strauss-Kahn’s friend Bernard Henri-Lévy. After expressing incredulity that “a chambermaid could have walked in alone, contrary to the habitual practice of most of New York’s grand hotels of sending a “cleaning brigade” of two people, into the room of one of the most closely watched figures on the planet,” he launched into a rant:

What I do know is that nothing in the world can justify a man being thus thrown to the dogs.

What I know is that nothing, no suspicion whatever (for let’s remind ourselves that, as I write these lines, we are dealing only with suspicions!), permits the entire world to revel in the spectacle, this morning, of this handcuffed figure, his features blurred by 30 hours of detention and questioning, but still proud.

What I know as well is that nothing, no earthly law, should also allow another woman, his wife, admirable in her love and courage, to be exposed to the slime of a public opinion drunk on salacious gossip and driven by who knows what obscure vengeance.

And what I know even more is that the Strauss-Kahn I know, who has been my friend for 20 years and who will remain my friend, bears no resemblance to this monster, this caveman, this insatiable and malevolent beast now being described nearly everywhere. Charming, seductive, yes, certainly; a friend to women and, first of all, to his own woman, naturally, but this brutal and violent individual, this wild animal, this primate, obviously no, it’s absurd.

This morning, I hold it against the American judge who, by delivering him to the crowd of photo hounds, pretended to take him for a subject of justice like any other.

I am troubled by a system of justice modestly termed “accusatory,” meaning that anyone can come along and accuse another fellow of any crime—and it will be up to the accused to prove that the accusation is false and without basis in fact.

I resent the New York tabloid press, a disgrace to the profession, that, without the least precaution and before having effected the least verification, has depicted Dominique Strauss-Kahn as a sicko, a pervert, borderlining on serial killer, a psychiatrist’s dream.

I am angry with all those in France who jumped at the occasion to settle old scores or further their own little affairs.

And I hold it against the commentators, pundits, and other minor figures of a French political class overjoyed at this divine surprise who immediately, indecently, and at the very first opportunity commenced with their de Profundis drivel by talking about a “redistribution of the cards” or a “new deal” at the center of this or of that. But I must stop here, for it makes me nauseous.

I’m angry with, to name one, the French M.P. Bernard Debré, who comes right out and denounces a man he calls “disreputable,” one who “wallows in sex” and has conducted himself, for a long time now, like a “scoundrel.”

I hold it against all those who complacently accept the account of this other young woman, this one French, who pretends to have been the victim of the same kind of attempted rape, who has shut up for eight years but, sensing the golden opportunity, whips out her old dossier and comes to flog it on television.

The other woman, of course, the one who is French, is Tristane Banon, god-daughter of DSK’s second wife. In 2002, as I mentioned in an earlier post, when she was twenty two and working on a book, she arranged an interview with Strauss-Kahn – which ended in tears. Here is what she said in a television interview&nbsp;four years ago:

He wanted me to hold his hand while he answered [my questions]. He said, “I can’t do it if you don’t hold my hand.” After the hand, it was the arm, and after the arm it was a bit further, so I stopped him.&nbsp; We ended up fighting . . . It was more than a couple of slaps, I kicked him, he opened my bra, tried to open my jeans . . . It finished very badly. Banon, who described DSK as “a chimpanzee in heat,” reportedly contacted a lawyer at the time of the incident, and he told her that he had a file detailing numerous incidents of a similar sort in which her assailant had been involved. But, in the end, she chose not to make a formal complaint – for fear that, by doing so, she would put an end to her career as a journalist in France. Let me add that she was not alone in making such an accusation. &nbsp;As French actress Daniéle Evenou put it in another television interview at about the same time, “Who hasn’t been cornered by Dominique Strauss-Kahn?”

The reports I have read suggest that there is enough physical evidence to prove that there was a physical encounter between Strauss-Kahn and the maid at the Sofitel Hotel in mid-Manhattan, and The New York Post&nbsp;reports&nbsp;that DSK’s defense attorneys are planning to argue that what took place was consensual. I would not be surprised if Tristane Banon were to testify regarding her experience with the man.

What we are about to see is an airing of the dirty linen of France, and it is not going to be pretty. As I pointed out in a chapter entitled “A Despotism of Administrators” in my book Soft Despotism, Democracy’s Drift, France is a democracy in name only. In practice, it is an oligarchy ruled by a narrow political class, largely drawn from among the hundred or so young women and men who graduate each year from the Ėcole Nationale d’Administration. These énarques run the civil service, dominate the political parties, monopolize ministerial positions within the government, and manage the country’s major corporations. For all intents and purposes, as Tristane Banon understood, they are above the law.

DSK is not himself technically an énarque, but he taught at ENA, and he is an honorary member of that elite group. The real reason why so many people in France are upset by what is happening in New York is that they could never imagine that, in their country, the law would be enforced against someone like them — someone as important as DSK.

There is another aspect of the issue that also deserves emphasis. The French are apt to sneer at the Puritanism and the “rigorous Protestantism” of the Anglo-Saxons, and they tend to look down on those who “tolerate infinitely better the sins of money than the pleasures of the flesh.” This posture will be hard to sustain in the future, for the conduct of Strauss-Kahn is going to make French libertinism seem more than a mite bit unsavory. We may even hear a bit more about the conduct of Roman Polanski – a child-molesting artiste thought to be above the law, who has been harbored in France for something like thirty years.

When the dust has settled – especially, if, as I suspect will be the case, the evidence is dispositive and Strauss-Kahn is convicted in open court – there may be considerable soul-searching in France. There certainly ought to be.