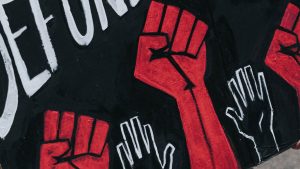 There is a well-known principle among those who live near wildlife: Don’t feed the beasts, nothing good will come from it.

But feeding the beast is what a lot of conservatives are doing lately. The beast in this case is the widespread deception of the progressive movement which dominates the media and somehow gained a foothold within the Christian church of all places. What has manifested is a kind of conversational dance between conservatives and the progressive left that follows a predictable pattern, and we see it all the time now.

First, something bubbles to the surface of the liberal consciousness. Liberals, being a passionate lot driven by emotion and controlling all major forms of media, begin saturating the internet with their latest proclamations about what we should all fight against today. Mostly this consists of denigrating anyone who holds an opposite position as racist, sexist, homophobic, or whatever.

Within hours we begin seeing placards strewn across the menus of our most frequented apps and websites: Standing in Solidarity with Asians. Teach Anti-Racism. Carbon Neutral Since 2007.

Most conservatives have learned to roll our eyes when we see this vapid response of fake solidarity. It’s disingenuous virtue-signaling that only purports to address certain societal problems without actually bothering itself with facts or even logic, often casting as villains those least likely to perpetrate the supposed offense – police, Christian ministers, freedom loving activists. We’ve seen it a hundred times and have learned to just let it go. You can’t reason a person out of a position they didn’t reason themselves into.

But a certain camp of conservatives is possessed with natural curiosity. They want to understand where these people are coming from on a purely academic level – like a lab technician experimenting with some rats.

Another camp of conservatives is highly pastoral, motivated to engage the liberals. Their hope in doing so is to open doors and establish a mutual respect with their adversaries. They believe that, in time, they too can share their own position and have a nice kumbaya moment.

A third camp of Christian conservatives, lacking firm convictions on some key matters, enter an introspective cocoon during these times. They wrap themselves up with the condemnation of the world and allow those labels to muddy up their identity. They trumpet things like “I’m listening” or publicly claim to be “educating themselves” on the plight of their fellow man, woman, person (they’re careful not to offend, you see).

I have a message for all three of these camps: Stop feeding the beast.

The truth of the matter is that these camps are engaged in a one-way conversation, a lecture if you will, and the beast isn’t taking questions from the audience. More than that, the beast is suffering from a form of collective mental illness and you needn’t be part of it. Stop encouraging them. Get up and walk out.

Case in point: There are only two genders, male and female. You know this is true; if you don’t, then you’ve already fallen into the beast’s trap but you still have time to get out. Pick up an anatomy book if you need to because you can’t argue with scientific reality any more than you can argue with stupid. Please stop doing both.

Trying to understand those who tout personal pronouns and who support gender therapy for children isn’t going to make you a better person. Those positions are foolish. No, it’s more than that; those beliefs are evil, and we need the moral clarity to say so.

Stop feeding that beast before it devours the things that matter.

Another case in point: Everyone has an ID and hardly anyone but kids with fake ones are bothered by having to show it.

Asking someone to show identification isn’t racist or class warfare. Want to know what is? Assuming that a poor person or minority is too stupid or inept to attain one. That’s the racist position.

Don’t believe me? Drive down to any neighborhood in the country and ask people whether they have an ID or not. With the exception of a few mentally challenged homeless people, you’ll get the same response from just about everybody because everyone needs one to get an apartment, a phone, a paycheck, a car, public assistance, and just about everything else in our society.

But this reveals another facet about the progressive left. They’re not concerned with fairness. They want to win by any means necessary, and enabling voter fraud is simply the most convenient way to do it.

Their goal isn’t to educate you, it’s to eradicate you. Or rather, to eradicate your belief system and tear down the framework of a society based on the mutual respect for strangers that conservatives carry in their core. Conservatives begin with a conviction of love thy neighbor and believe the best way to do that is to leave their neighbor alone or help them out when they are clearly in need. It’s a simple gospel we live by because God designed it to be simple.

A man wants to dress like a woman and call himself Mary? Fine. Love thy neighbor, but you don’t have to jump into his pool and swim around in his mentally ill fairy tale. I suggest praying for him and moving on, maybe offer to get him some help if he wants it. But in the end, it’s his joy that is at stake, and all are offered free will.

We can spend our entire lives trying to understand the pathos of individuals screaming from the rooftops every time they get incensed by the latest voices in their heads. And I admit, it’s hard sometimes not to look, or even approach them and ask, “What the heck are you talking about, friend?” God’s spirit of compassion is within all of us. But it’s high time to remember that we’re not doing anyone any favors by enabling the beast’s appetite.

There is another way to show your compassion: Speak the truth and let God do the work in the hearts of men. It’s been a winning formula since the beginning. But so has the serpent’s insipid method of enticing us with smooth words and polished arguments to take our eyes off God. That battle has been with us all along.

There was a simple solution Adam and Eve could have followed, and we can do it now. Choose to listen to the voice of God and ignore the evil ramblings of the accusers. Do that, and when the beast starts fending for itself, you may see it less frequently.  And you might just get a little closer to God and a little farther away from the world in the process.