Hot cross buns have been associated with the Easter season for centuries. The tradition started in Britain and spread with the empire. That helps explain why the tradition would not be recognized by a desert southwest coffeehouse keeper, as these buns were not part of the old Spanish  culture. As Ree Drummond, the Pioneer Woman, wrote:

English folklore said that Hot Cross Buns baked on Good Friday would never spoil throughout the following year. Some bakers believed that holding on to one Hot Cross Bun and hanging it in the kitchen meant that all yeast products in the coming year would rise successfully. Some sailors took Hot Cross Buns on their voyages to ensure their ships wouldn’t sink. And friends who gift one another with Hot Cross Buns every year are said to remain friends for life.

I noted several years ago that Panera Bread stopped offering hot cross buns, while an Arizona chain, Wildflower Bread, continues to offer holiday orders of hot cross buns. This year, I thought I would try my hand at baking a batch.

The Pioneer Woman’s hot cross buns recipe is similar to others requiring yeast. I have not developed the patience for proofing bread, so I noted the spices suggested and continued my search for a quick bread version (updated). I found one and slightly modified it, as noted with italics below:

Makes 6, this is silly, so let’s double the recipe to make a dozen.

1/2   c. raisins
2/3  c. milk
FROSTING:
1/2 c. confectioners’ sugar
2 tsp. milk
OMIT THE VANILLA. It colors the frosting an off white that will not stand out as much on top of the golden baked tops of the buns. I found that out with my first batch, which is quite edible:

1. Mix the flour, baking powder and salt together in a bowl. Cut in the shortening with a fork until it looks like coarse crumbs. Add the honey, cinnamon and raisins and toss lightly. Make a well in the middle and pour in the milk all at once. Stir it around quickly with a fork and form a ball.
2. Divide the ball into 12 small ones. Grease a baking sheet and place the 12 balls on it, about 2 inches apart. With a knife cut a deep cross through the top of each ball. Bake them at 400 degrees for 15-20 minutes.
3. When the rolls are slightly cool, dribble the frosting mixture of confectioners’ sugar, milk over each. This forms the cross on each bun. Practice makes better. Use a teaspoon and drizzle a few lines on wax paper or such so you get the flow right. Then, start off of the buns and steadily pass over a line of buns. You will need to make three long passes (4 buns) and three short (3 buns). 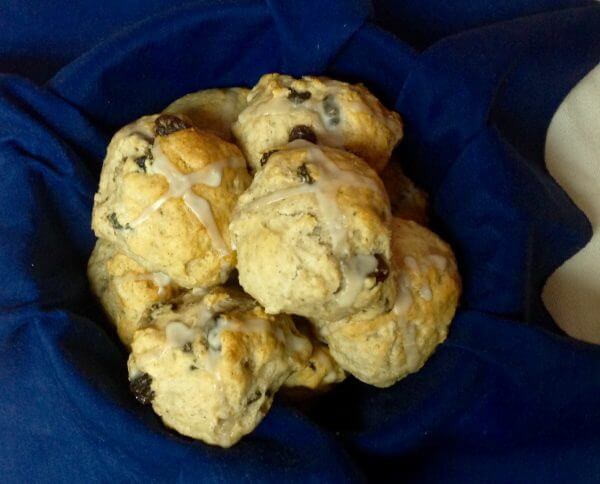 In a hurry? Not inclined to make bread from scratch? No problem. Grab a tube of crescent rolls from the egg and dairy section of your grocery store. Pillsbury offers this recipe to doctor up their basic crescent rolls. I throw in a few spice suggestions in italics.

1/4 teaspoon grated lemon peel, if desired
Icing
1/4 cup powdered sugar
1 to 2 teaspoons milk
Steps
1. Heat oven to 375°F. Unroll dough and separate into 8 triangles.
2. In small bowl, mix raisins and lemon peel; spoon about 1 teaspoon raisin mixture onto short side of each triangle. Sprinkle cinnamon over the triangles. Drizzle honey over the triangles. Gently wrap corners of dough over filling and roll to opposite point; pinch to seal. Place point side down on ungreased cookie sheet.
3. Bake 12 to 14 minutes or until golden brown. Remove from cookie sheet; place on wire rack. Cool 10 minutes.
4. In small bowl, mix powdered sugar and enough milk until smooth and drizzling consistency. With spoon, drizzle icing in cross shape on top of each bun.

If you prep in advance, the frosting will keep in the refrigerator. Just take it out far enough in advance to come up to room temperature, so it drizzles smoothly.