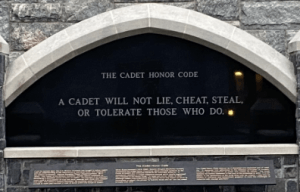 The Congress shall have Power . . .

To raise and support Armies, but no Appropriation of Money to that Use shall be for a longer Term than two Years;

To provide and maintain a Navy;

To make Rules for the Government and Regulation of the land and naval Forces;

To provide for calling forth the Militia to execute the Laws of the Union, suppress Insurrections and repel Invasions;

To provide for organizing, arming, and disciplining, the Militia, and for governing such Part of them as may be employed in the Service of the United States, reserving to the States respectively, the Appointment of the Officers, and the Authority of training the Militia according to the discipline prescribed by Congress;

The two-year restriction on defense spending is only applicable to standing “Armies.” At the same time, the Framers knew the need for a small but effective Navy with naval infantry, as a means of protecting American trade from piracy and predatory foreign governments. For internal defense, the Framers thought it safer to have “the Militia,” who have to go back and live in their communities, “suppress Insurrections.” Recognizing a need for uniform standards of training and equipment, the new constitution gave Congress the power of setting standards, while leaving with the states the power to appoint officers and authority to train the Militia.

A civilian is the supreme commander of all armed forces under federal control. Referring back to Article I, the Army is always on a very short budget authorization string. Presidents were not given a large standing force that might be turned to dictatorship.

A well regulated Militia, being necessary to the security of a free State, the right of the people to keep and bear Arms shall not be infringed.

The Constitution contemplated a ground force mostly of citizen soldiers, a militia. Infringing on the right of the people to possess and carry military-grade long guns (muskets and then rifles suitable for participation in the militia) would gut the ability of a state to maintain its security against insurrection and invasion.

No Soldier shall, in time of peace be quartered in any house, without the consent of the Owner, nor in time of war, but in a manner to be prescribed by law.

This goes back to one of the causes of the War for Independence. Our Army and Militia may not be used as an occupying force, moving into peoples’ homes without their consent. Even under the necessity of war, the Commander in Chief and his forces could not occupy Americans’ homes except, in accordance with laws passed by Congress.

From the Founding to the Cold War

The American military had a cycle, repeated from 1775 to the dawn of the Cold War. We would build forces for war, then disband all but a tiny Regular Army officer corps. These officers would be given brevet ranks, temporary promotions, as needed during wars, large or small. When the war ended, officers would mostly revert to their last permanent rank.

This changed with Stalin fortifying Eastern Europe and the near loss of the Korean peninsula. After VJ Day, we were busy shoving equipment off docks in the Pacific. Why waste bunker oil steaming home with equipment destined for scrap? We had to scramble hard to equip and train forces to stop the Russian-backed North Korean communist army, supported by Russian jet fighter pilots. Yet, the Soviet Empire did collapse, and the Communist Chinese were in no position to step into the super-power arena in the 1990s, So, the collapse of the Evil Empire quite normally prompted calls in the early 1990s for a “peace dividend” and a significant downsizing of our standing army, air force, and navy. What changed was the size of the military-industrial establishment and its caucus in Congress.

Direct political involvement by serving senior officers did not start post-Cold War. Major General Leonard Wood, after whom an Army post is still named, openly criticized civilian policy and ran for the Republican presidential nomination before retiring. Wood gave America First speeches against the rise of the Reds. General Douglas MacArthur openly defied the Commander in Chief and, when relieved of command, came back with thoughts of turning this into a presidential run, as General George McClellan had done to Lincoln in 1864. Indeed, MacArthur wanted to run against FDR in 1944, but was crushed in the Republican nominating process, and was again in the mix in 1948. So, our history includes a handful of high-profile senior officers who became openly political while still in uniform.

Morris Janowitz was the first scholar to seriously study America’s military elite. He pried survey and demographic data out of the senior officers across the services, resulting in The Professional Soldier first being published in 1960. In this groundbreaking work, he laid out beliefs and attitudes of the top ranks. In this work, he raised the question of the era, whether we could build and sustain a force that would stop communism without all-out war. Some were pessimistic that our form of democracy could stand resolute in one confrontation after another, when there would be no big national recruiting drive, no “remember Pearl Harbor,” and no grand victory parade. Janowitz outlined a possible path to a “constabulary force,” while helping reassure Americans that our military was led by people who were not so different than their civilian counterparts.

Janowitz confirmed that those officers who attain the highest ranks tended to mirror the civilian elite in religious affiliation. In the 1950s that meant mostly mainline Protestant (Episcopalian, Presbyterian), with significantly fewer pietist (Baptist, Methodist, Church of Christ) or Catholic. Remember, this was the 1950s, before JFK had to pledge not to answer to the Pope if elected president.

At the same time, the military elite had reservations about businessmen’s motivations, placing profits over patriotism or self-interest over the national interest. There was a certain long-standing mutual disdain, as our captains of industry had long expressed dislike for military spending outside of wars, and a low opinion of the military mind. By the 1950s, the services all noted that they were no longer getting the sons of the civilian elite at the military academies. Instead, our professional officer corps was already rising from working-class or limited-college families.

The geopolitical conditions were also changing, forcing reaction by the officer corps. We now had unbelievable power to destroy entire cities, even entire countries, and might do so in minutes or hours. To be a senior officer was to take on responsibility for managing violence at a level never before known. It was bad enough when the general staffs of Germany, France, Russia, and England possibly bungled their nations into World War I. If the American and Russian staffs managed to bungle the world into World War III, well, the possibilities were sobering. Accordingly, the military elite knew they had to be engaged in the political process, at least seeking to inform the debate. Nevertheless, they split between those who focussed on deterrence by the credible threat of winning and those who focussed on prevention through mitigation, including the full range of international actions short of all-out warfare between NATO and the Warsaw Pact.

The military elite entered the Beltway brawl with an unfair advantage over their civilian agency counterparts. An Army officer, on graduating from college and being commissioned, took a basic officer course. Three years later, there was another course for captains. Then there was the course for majors. Finally, there was the capstone course, the senior service college, most prominently the Army War College. This leaves out all manner of shorter courses to introduce this or that technical or management skill. The State Department, CIA, and FBI have nothing of the sort to this very day. With larger standing forces, and with apparent basic organizational competence, the temptation was to call on the military to provide relief for domestic and international disasters, tasks well beyond war-fighting. While military officers might complain about missions other than all-out war, they also know their services need to remain relevant in the annual budget battle.

Credentialing and the civilian academy

At the same time, professional military officers were seeking more advanced civilian credentials to boost their perceived status. Masters degrees became almost required for advancement to consideration for flag ranks, generals, and admirals. Want to be a colonel? Have some sort of master’s degree or equivalent graduate certificate in your record when your file goes before the promotion board. Even the Army War College came to boast of its program being certified by a partner university, that grants AWC graduates a “Masters in Strategic Studies.” So, our military officer corps, from top to bottom, was entering through undergraduate programs that, even at the service academies, were conforming to the civilian academic credentialing systems. Desiring this linkage, this affirmation of broader status, meant creating a vulnerability to university administrative and departmental trends.

My own experience was as an officer who entered at the height of the Reagan buildup. My peers were busy talking load versus no-load mutual funds and getting that first house to turn into a rental property while serving elsewhere. This was different from our senior officers. Many of the best of my generation were happy to take the money and run into civilian employment when the big post Cold War reduction in forces hit. We were shaped by growing up in the 1970s and going to college in the early 1980s. We should not be surprised if the most recent cohorts of junior officers reflect the social and undergraduate environment of the past few years.

Senior officers have long recognized they had to be aware of the civilian environment and had to advocate for their institution in that context. So, we should not be too surprised that the current cohort of senior military leaders have learned to reflect the current elite views. If you would have them do otherwise, how would that look in the context of our constitutional system?