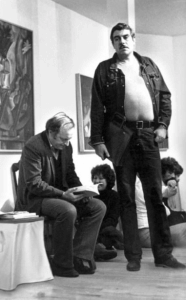 After eighteen months, Brodsky was allowed to return to Leningrad. While his time in the mental hospital had been miserable, he found the months doing simple manual labor and having free time to read English and American literature far from prying potential informer eyes in his cabin restorative. Akhmatova saw the irony in how much the KGB’s plan for forcing the young poet into submission had been a boon to him, commenting, “What a biography they’re fashioning for our red-haired friend! It’s as if he’d hired them to do it on purpose.” Transcripts of his trial had also been published in samizdat and smuggled into the West, where he gained recognition and powerful advocates in artistic and literary circles. Having such towering figures as Shostakovich and Sartre advocating and agitating for him was part of the reason he had been released quite early in his sentence.

At the same time Dovlatov had finally been released from the MVD and bounced around Leningrad, and beyond, working as a journalist for any publication that would hire him. He had continued to write short stories, and had begun to perfect his form, during the same period, but no publisher would touch them. Despite the hardships for both men, Lena Dovlatova, Sergei’s second wife and the mother of his daughter, recalled joy as well as heartbreak permeating the years when both men had come home to Leningrad. Once, walking back to their flats in the early morning hours from a party across Дворцовый мост, Lena discovered that she had lost the belt to her only American dress, a dear and expensive illegal gift from her husband. From a few steps behind them, Brodsky called out to the couple that he knew exactly where it had gone, and that he would rescue it for her. Palace bridge is a bascule bridge, with elaborately designed railings that had managed to snag Lena’s belt. Joseph, heedless of the couple’s shouts of horror, lept across the bridge’s growing opening, grabbed the belt, and lept back again, bowing as he ran to present his lady with her prize like “a chivalrous knight.” 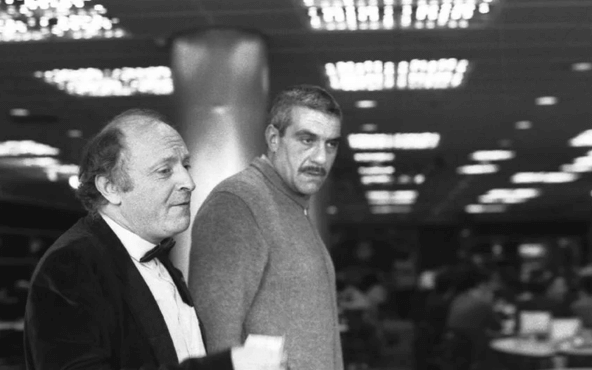 Although Brodsky was being published, with growing success, in the West, his work only circulated underground in the USSR, and, as with many Jewish dissenters of the era, Soviet officials were eager to be rid of him. (As Stoppard’s Alexander Ivanov says, “‘They don’t like you to die unless you can die anonymously. If your name is known in the West, it is an embarrassment.’”) When he refused two invitations to immigrate to Israel in 1971, the bureaucracy took power into its own hands. In June of 1972, his apartment was raided, and he was taken to Shosseynaya Airport, boarded on a one way ticket to Vienna. In his suitcase, he carried a collection of John Donne poems, a typewriter, and two bottles of vodka.

As Brodsky built a life in America, traveling as a poet in residence between college campuses all over the country, Dovlatov watched his wife and daughter escape through refusenik channels, and began to have his work secreted to the West for publication. Similarly to his old friend, the Communist establishment was growing tired of Sergei, and ‘strongly encouraged’ him to leave. The suitcase which he departed Petersburg with, never to return, became the basis of his most famous novel, Чемодан.

Life in New York opened up a world of possibilities for Dovlatov. “For the first time in my life I feel at home”, he gleefully explained to a literary journalist. Though he still struggled with mainstream publication, he found upon arrival that there was already an enthusiastic Russian readership for his work, people that had read it in samizdat either in the US or the USSR and were eager for more. Brodsky had also been singing his praises to all who would listen, and assisted in getting his newspaper, Новый американец, off the ground, writing for it whenever he could find the time. He told literary critics and college students that Dovlatov “is the only Russian writer whose works will be read all the way through.”

Reassembling his family in exile, Sergei still regarded Joseph as every inch his literary big brother. While he was a large (6’6” by most accounts) intimidating ex-boxer, with a deep voice and swarthy coloring, who had described himself over the phone to a potential girlfriend by saying “I resemble a dried apricot vendor. Big, dark, you’ll be scared immediately!”, he was easily frightened by Brodsky, more than half a foot shorter and built more for poetry than pugilism. The musicologist and journalist Solomon Volkov remembered this interaction with Dovlatov:

“Once the writer Sergei Dovlatov…inquired in all seriousness as to whether I’d ever had a nosebleed after a long tête-à-tête with Brodsky. After hearing my answer in the affirmative, he gave a sigh of relief. ‘Thank God. I thought I was the only one who was such a weakling.’”

Others recalled the extraordinary care he put into all of his meetings with the elder poet, and how hard he tried both to please and help, as Brodsky had given so much help to him, the other man:

“Dovlatov…prepar[ed] carefully for each of their meetings. When Brodsky tried to switch to lighter cigarettes after another heart attack, Dovlatov brought him a pack of Parliaments. They contained less than a milligram of harmful resins, and it was written on the pack: “Less than one.” That was the name of one of Brodsky’s famous English essays, whose title in Russian translation did not find a worthy equivalent.”

Brodsky enjoyed sketching immensely in his free time, or even when he was chatting, and drinking, with friends. Indeed, one of his sketches of Dovlatov became the cover art to a Russian edition of Наши. When a friend pointed out to Sergei that his nose was not quite as Brodsky had portrayed, he replied, “That means I’ll have to have plastic surgery on my nose.” 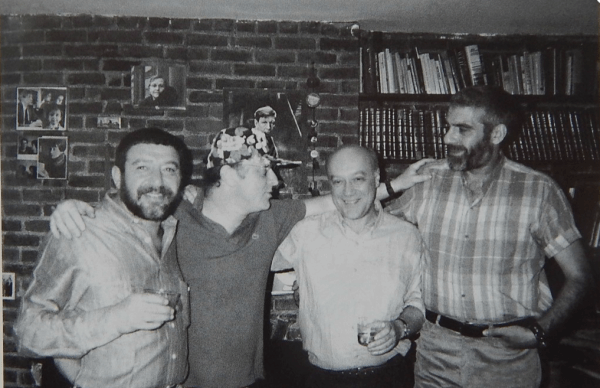 Success began to come Dovlatov’s way in the mid-1980s. His works were gaining popularity with English readers, and he was being published in The New Yorker, something Brodsky lobbied for for years. But, while Brodsky was the one who had suffered numerous heart attacks, it was 48 year old Dovlatov that died of heart failure in the back of a New York City ambulance on August 24th, 1990.

For a year, Brodsky said nothing about his friend in print. Then, on the first anniversary of his death, he published a long essay in Russian and English called “About Sergei Dovlatov: ‘The World is Ugly and People are Sad.’” The grief which Joseph was experiencing, and the struggle which he had in squaring his friend’s absence with the continued presence of his work, bled starkly onto the page: “To imagine that he still exists, but does not call or write, for all his attractiveness and even evidence – for his books continue to come out – is unthinkable: I knew him before he became a writer.” For all of his elaborate way with words, the simple declarations “Мы были Сережей и Иосифом” (“We were (simply) Seryozha and Joseph”) and “Но для меня он всегда был Сережей” (“for me he was always Seryozha”) speak volumes.

The essay, though, was not confined to exploring their bond. Rather, Brodsky set himself to making a final, glorious explanation of Dovlatov’s work. Comparing his short stories to bard songs, he explained that Sergei’s iconic style (tightly written works filled with humor, but that always began and ended without jokes) relies on the “rhythm of each individual sentence and cadence of his authorial utterance. They are written like verse; plot in them is secondary, used as a pretext.” In their half elucidated details and terse sentences, Dovlatov’s stories were an answer to Russia’s prosaic prose tradition, creations which readers at once found beautiful and unsettling because of how sharply they penetrated, and questioned, the essence of existence.

This unique style carried with it a message. “The decisive thing is his tone, which every member of a democratic society can recognize: the individual who won’t let himself be cast in the role of a victim, who is not obsessed with what makes him different.” There was humor and tragedy and deliberately lived lives, all in the midst of totalitarianism and stolen freedom. 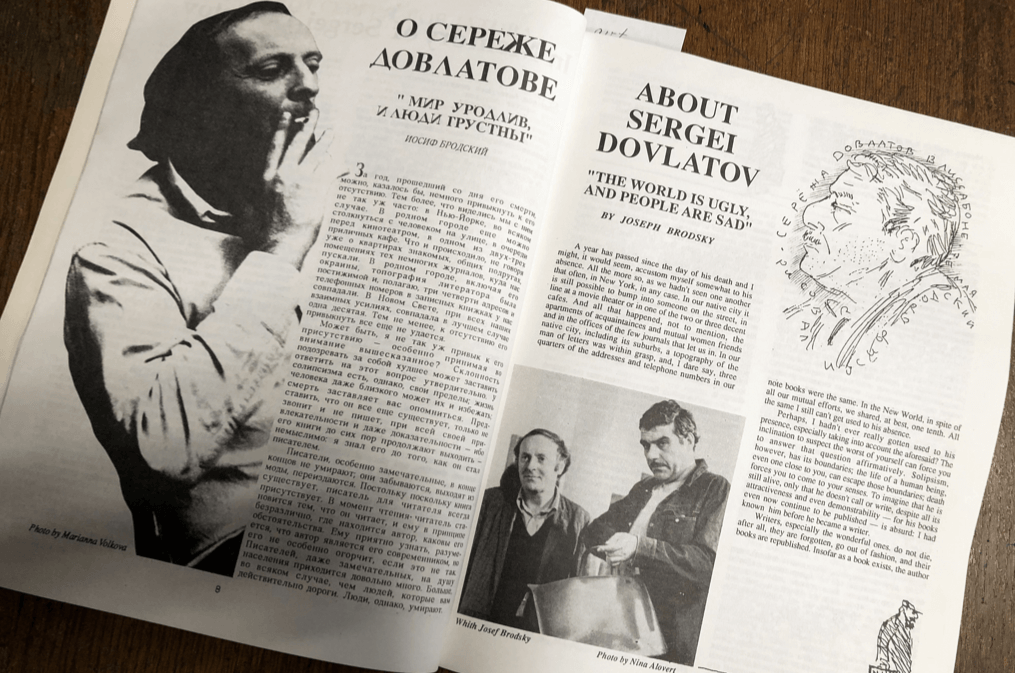 In a way, Dovlatov is the butter to Brodsky’s bread. On their own, each of them wrote profoundly influential, stylistically unique, full oeuvres, but reading them together provides an even greater depth, an elucidation of the ideas which each sought to communicate, often common ideas. One can hear the answering call to Dovlatov’s democratic tone in Brodsky’s elaborate, rich turns of verse: “What should I say about my life?/That it’s long and abhors transparence/Broken eggs make me grieve; the omelet, though, makes me vomit/Yet until brown clay has been rammed down my larynx/only gratitude will be gushing from it.”

Dovlatov declared that he had “hope for the rebirth of Russian literature because one brilliant writer-Joseph Brodsky-…continues to labor at [his] work”, but it was, as Brodsky recognized, the two of them in tandem, prose and verse, terseness and elaborateness, who would reignite the flame of Russian literature, of literature for any people who wished to consider the blessing and problem of liberty. Together they preserved, and enriched, the language of human freedom for generations to come.