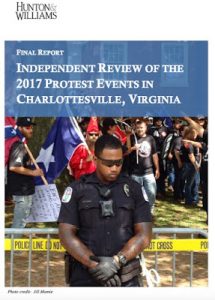 The police response to events of the day was the subject of an independent review by former US Attorney Timothy Heaphy. Charlottesville’s police chief resigned, as his and the inept state police response actually deserve some of the blame for the clashes that happened – they allowed the protesters to literally march into each other, and made a very belated effort to separate them. You can find Heaphy’s and his law firm’s review here.

But never ones to let a crisis go to waste, partisans quickly attempted to tie President Trump to the events of the day. They even created and to this day still repeat the “Charlottesville Hoax,” claiming that Trump called the white supremacists “very fine people.” Presidential candidate Joe Biden perpetuated the hoax with no pushback from so-called media fact-checkers as recently as last November. Never mind that President Trump explicitly condemned the white supremacists, but was actually referring to the people involved in both sides of a debate over removing Confederate statues.

Why am I going to all this detail? Because it sets the stage for the ongoing narrative – that we suffer from a continuing crisis of Trump-inspired “white supremacy,” that white supremacists and “far right” fringe groups, like the Proud Boys, were involved in or helped instigate violence during last summer’s riots and protests across the United States. It started with the first ones last May in Minneapolis, and more recently, fueled if not orchestrated the Capitol “armed insurrection” of January 6.

It is all part of a narrative that deserves closer inspection. Much closer. There is still a lot we do not know or aren’t being told. Or worse, much of it is misleading, if not wrong, and designed to deceive.

I don’t discount FBI reports and testimony that white supremacists and allied “far right” or alt-right groups are a serious issue. They always have been, especially when the Ku Klux Klan rose to prominence as the militarized wing of the Democratic Party about 100 years ago. We have a long, often disgraceful, and complicated history involving race in the United States. Over the past 60 years, we have made great strides to course correct. But instead of celebrating, honoring, and building on our achievements, malevolent partisans are perpetuating and reinventing painful historical episodes, and exploiting new events for malign purposes. And it mostly began in Charlottesville with the campaign to tear down, remove, and replace statues and names on buildings. Even Abraham Lincoln, no confederate hero.

That returns us to events of January 6, 2021, at the US Capitol. You know, the “armed insurrection” referenced by House Impeachment Managers during Trump’s second trial.

Independent conservative journalist Julie Kelly has delved into the “armed insurrection” accusation, and found it. . . wanting. So has journalist Byron York of the Washington Examiner, who recounts last week’s Senate hearing on the Capitol riots:

One of the witnesses at the Senate Homeland Security and Governmental Affairs hearing on Wednesday was Jill Sanborn, who is an FBI assistant director for the Counterterrorism Division. In the course of the questioning, Republican Senator Ron Johnson asked Sanborn about the rioters and guns. Here is their exchange:

JOHNSON: How many firearms were confiscated in the Capitol or on Capitol grounds during that day?

SANBORN: To my knowledge, we have not recovered any on that day from any other arrests at the scene at this point. But I don’t want to speak on behalf of Metro and Capitol Police. But to my knowledge, none.

JOHNSON: So nobody has been charged with an actual firearm weapon in the Capitol or on Capitol grounds?

SANBORN: Correct. The closest we came was the vehicle that had the Molotov cocktails in it. And when we did a search of that vehicle later on, there was a weapon.

JOHNSON: How many shots were fired that we know of?

SANBORN: I believe the only shots that were fired were the ones that results in the death of the one lady.

And the Wall Street Journal did their own review:

Most of the nearly 200 people charged in federal cases in connection with the Capitol riot have no known ties to far-right groups, underscoring the challenge of heading off violent extremism, a Wall Street Journal review found.

Authorities say they are ramping up efforts to counter extremism in the wake of the Jan. 6 attack on the Capitol, but they are discovering that any charges against people affiliated with organized groups such as the Proud Boys addresses only part of the issue.

According to the Journal’s review, 16% of the 195 defendants charged in federal cases have a known affiliation with right-wing militias or other groups that espouse violence. Researchers at the Chicago Project on Security and Threats, a University of Chicago institute that looked at a larger group of arrestees that included local charges, found that 10% had known affiliations with such groups.

As researchers and others try to pin down the motives that drove thousands to storm the seat of American government, they are looking at the arrested suspects’ economic, political and geographic backgrounds for insight into the riot and whether it could happen again.

The University of Chicago researchers, citing public records, found that those arrested come from both Republican and Democratic strongholds. Many worked in industries vulnerable to pandemic shutdowns, such as moving, construction and restaurants. About a hundred have public defenders or other court-appointed attorneys, the Journal found, after judges determined they couldn’t pay for their criminal defenses.

Individuals in more than two dozen of the cases reviewed by the Journal have sought bankruptcy protection in the past, been foreclosed upon or ejected by landlords, or left a trail of unpaid bills and taxes. At least 27 defendants had criminal records before their riot-related arrest, according to the Journal review.

There may be something bigger going on here, and maybe it is related, in some part, to our governments’ responses to the pandemic. Meanwhile, congressional Democrats continue to downplay last summer’s Antifa violence to keep eyes and cameras focused on the Capitol riot. Yes, let’s pay careful attention to the law enforcement treatment of the Capitol rioters as well as last summer’s Antifa rioters. We can start here. It is not “whataboutism” to compare the treatment of and reaction to violence last summer and at the Capitol in January, whether by public officials or our legal system. We do not need double standards or two systems of justice, but sadly, it is what we’re being fed. And it is poisonous gruel.

For the record, again, everyone who illegally and/or violently attacked the Capitol and its police that day should be vigorously prosecuted to the fullest extent of the law. We should feel likewise about the 500+ protests-turned-violent Antifa and BLM events in some 200+ cities this past summer. Over 300 have been charged from the Capitol riot – that’s a good start. Thousands were arrested and dozens were charged with federal crimes from last summer’s riots. But we still have a lot to learn, including that a lot of the political spin and media reporting we’ve been fed is gaslighting.