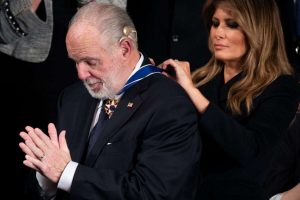 But on that April day, 1989, while setting up my puny office radio one morning, I stumbled onto this radio talker who was different, on a small AM station in DC, WNET. I think it was AM950. This guy was different. Thoughtful, insightful. He talks like I think, I remember. I bet some of you said the same thing. I called a few friends to ask if they were following him (few were then, but that changed). Thus launched a new genre of terrestrial radio. Rush Limbaugh not only created the modern talk radio industry, he saved AM radio, which had been in serious decline for many years. His show spread like wildfire across the United States. He took first place for the largest audience in radio and rarely if ever, looked back.

He built a special relationship with his audience. It was more than a show. It was a conversation, even an audio classroom. One-sided, to be sure, but Rush had the additional advantage of being something of an original thinker with a terrific network of other original thinkers and well-placed sources with whom he obviously talked – and carefully protected – during his entire career. Not bad for a guy who’d been fired from a Major League Baseball PR job (Kansas City Royals, if memory serves). He taught me a lot about Rio Linda, California. He brilliantly used humor to mock Democratic politicians. I remember tuning in the day after the November 1994 election as Republicans won control of the US House for the first time in 40 years when he opened his show with the late James Brown’s “I Feel Good.” He did that a few more times on celebratory days.

I also vividly remember the time he broadcast and admitted that he couldn’t hear himself talk. He’d lost his hearing. He walked us through his experience of obtaining cochlear implants, which you can see in the photo. He did much the same with his lung cancer diagnosis. He never sought sympathy; he just wanted to share his journey.

Rush’s empire would expand briefly into two top-selling books, an evening television program, and even a line of “stained glass” neckties that more than a few US Senators sported on occasion (I had one, too). He launched a newsletter. He built quite the empire.

Others quickly followed at different times of the day. Rush largely owned the 12-3 Eastern time slot. Interestingly, others could also prove successful during the same midday slot, perhaps not as well, but still. Think of Dennis Prager of the Salem Radio Network. He has done quite well, with a different style and approach. Speaking of classrooms, he has built the wildly successful “Prager University,” a brilliant series of five-minute instructional and historical videos. If I were homeschooling a child during this pandemic, that child would be spending a lot of time with those videos.

I always found it interesting that Rush was slow to do what others did, like creating a website. He never really converted his show into a podcast, or a series of podcasts, as many other radio talkers do, such as Hugh Hewitt and his “Hughniverse.” Rush always fell back on his pride and joy, the midday slot on terrestrial radio. And it worked for him. He never returned to television or wrote another book (other than a book or two geared to children) after I Told You So.

The key to his success? He never took his core audience for granted. Even when on the attack, he never lost his sense of humor and never failed to leave his listeners without hope. They were his family, extended or otherwise. You will see him referred to as their “radio dad.” His reach and influence were unmatched.

Terrestrial radio has begun to face challenges again, thanks to the advent of “on-demand” podcasting. Like many of you, I actually don’t listen to the radio in real-time much anymore, including SiriusXM. I prefer subscribing to a few podcasts that I can call upon demand via my iPhone and whatever blue tooth headsets or speakers are on hand. Most of the radio apps, like Pandora, now feature podcasts. I also subscribe to more podcasts than I can keep up with. Hewitt’s show is one. My friend, Chris Stigall, who appears on early morning terrestrial radio in both Philadelphia (AM990) and Kansas City also has a separate and wonderful podcast on which he occasionally invites me to appear, is another. I’m a fan of Marc Thiessen’s and Danielle Pletka’s “What the Hell is Going On” podcast from the American Enterprise Institute. Dan Bongino, Ben Shapiro, and others have built estimable and successful enterprises with loyal audiences. Another friend at Philadelphia’s WPHT, Rich Zeoli, converts most of his terrific and often humorous segments into podcasts. There are others too numerous to mention here. And that’s just within the conservative political genre. There are so many more. The iTunes podcast store is huge.

Rush started it all.

But let’s be clear: Yes, Rush is irreplaceable. His time slot will be filled by one of many talented broadcasters across the airwaves, probably more than one. The EIB “Golden Microphone” should be retired. Would you want to be constantly compared to Rush, every day? Not me. But the industry will continue to evolve, and no one is likely to emerge – nor can – the way Rush did to the pinnacle of his profession. He is our “Old Major,” to borrow from Animal Farm. Others have been picking up his mantle for years and will continue. We move on, but whether you be on The Right or The Left, you should take a moment to honor and respect the person, grudgingly if you must, who launched an industry that has truly influenced America, if not the world, in remarkable ways.