Several years ago, my rabbi was arrested on charges of voyeurism. He had placed a secret camera in the bathroom of the ritual bath of our synagogue and captured ~150 women on tape (I was one of them). The story became the biggest in the Jewish world that year, and I found myself at the center of it, as the most public of the victims. (You can read the whole story here)

This is how my attention to sexual scandals from those in positions of religious power came to be. And as such, I read this piece from David French in the Dispatch with great interest about a scandal involving another religious leader, the now-deceased Ravi Zacharias. I also have a personal connection to the story, similar to French, in my friendship with his former spokeswoman, Ruth Malhotra. I’m not as close to Ruth as David (I had to ask David for her number to send a text of sympathy when all of this broke), but David does an incredible job deep diving into the scandal and devoted a great deal of space to how Ruth tried in vain to right the ship.

With the news of Zacharias’ offenses, I noticed a major homeschooling curriculum make an announcement today about continuing to use his materials, 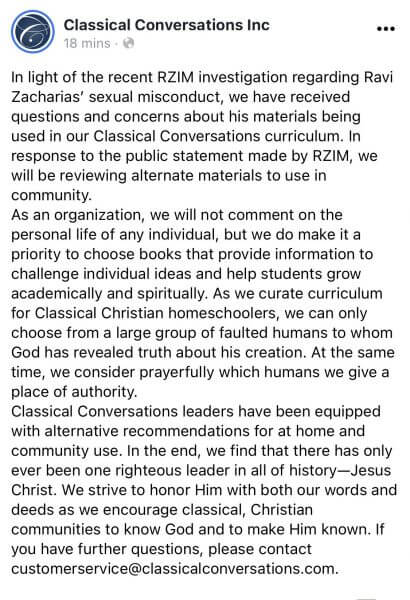 The announcement sparked an interesting conversation on the post about if his words, which retain their truth in their religious messaging, should be cast aside due to his misdeeds. One comment said,

Flawed humans can still have a body of work that is right and true and a valuable contribution . one can commit grave sins and still do other things well. 2 things can be true at once. King David and Paul come to mind.

It’s a question I find myself asking a great deal when I consult with the books of my rabbi’s that I still own. People see them on my shelves and are surprised I haven’t made a bonfire, and perhaps I should, but his actions in my mind don’t invalidate his valuable Jewish scholarship. But while I still use his work for reference on matters of law, I don’t read his books to gain any insight on spirituality or morality, nor do I publicly reference him anymore.

Seeing as though many people are unaware of what it’s like to be a victim of a religious leader, I wanted to share that perspective as it pertains to individuals like Zacharias. As a victim, when I see the religious work of flawed individuals like my rabbi still respected and venerated, it is invalidating of everything his actions put us through. It tells us his actions don’t matter and never did, and that he has a get out of jail (or hell) card due to his position of power. It further alienates us (both victims and also people who care about these issues) from faith, feeling as though this is the person who is esteemed in our religious community remains respected and venerated. The former is a problem for individual victims alone, but the latter is the ripple-effect of victimization in a wider religious community. In my research of sexual crimes and offenses, and in my personal and anecdotal experience, it’s this sense of alienation that has the greatest damaging impact on the wider community after a scandal erupts. In this vein, I think the move from Classical Conversations is the right one, sending a clear message about its position on modern-day flawed individuals of faith. It would be nice to see more moves like this when scandals like this one break.