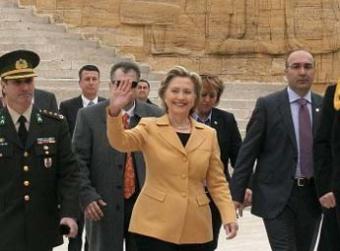 I was with my family today in the office of the kind of American company that makes you say, “My God, even if we’re going broke–what an astonishing, disciplined, unparalleled society. Look what people are trying to do. Look how innovative they are. Look how committed they are to science, to technology, to finding solutions to incredibly complex problems, to achieving things no society has ever succeeded in doing before.”

The receptionist’s desk had a sign that faced out. The sign explained the company’s customer service policy–one in which every employee had been trained. Employees pledged to make eye contact with every customer, because “this says that you are important to me.” (I am recreating this pledge from memory–I didn’t take notes. I can’t guarantee the phrasing, but it was to that effect.) Employees also pledged to smile at every customer, and the distance at which they were to begin smiling–15 feet–was precisely specified. Maybe that doesn’t seem strange to you yet, though to me that already seems plenty strange, in an only-in-America way.

But tell me if this part doesn’t seem strange to you, when you think about it. The company was the Fred Hutchinson Cancer Research Center, and this was a cancer ward.

In other words, many of the people who walked up to that reception desk were waiting to hear if a judge they did not know had arbitrarily pronounced upon them a death sentence they could not understand for a crime they never committed. Very rarely do these circumstances make people feel–genuinely–like smiling.

Now, of course people smile, genuinely, in cancer wards–sometimes. But the only culture I’ve ever known in which a smile would be considered the most appropriate response to this situation, no less the obligatory one, is American culture.

In most other places I’ve lived, the culturally appropriate facial expression would be something Americans would understand as warm, concerned and caring–certainly. Eye contact–for sure, I think almost universally that means “I notice you.” But you’d try to look serious, because this is serious–there could be nothing more serious–and it would be considered bizarre, completely divorced from reality, to fail to acknowledge that. You’d wait to smile until the customer, also known as the patient, took the lead. If the customer’s expression suggested terror, grief, pain or fury, you would not smile: That would not be understood as an empathic response. In fact, it would be seen as a reaction somewhere between inappropriate and insane.

The photos I’ve posted are of our Secretary of State, who two days ago was in Turkey to discuss, among other things, strategic cooperation on terrorism. This was in the wake of a devastating attack that claimed the lives of 13 Turkish conscripts.

I’m looking at those photos and I know that what our highest public ambassador thinks she’s conveying is, “friendship, unwavering solidarity, support, strength and optimism.”

And I also know that many Turks, looking at this, will feel, even if they can’t quite say why, “Americans are phony and they don’t care about us. I don’t trust them.” They’ll feel this no matter what she actually says, because the facial expression will look so odd to them.

I don’t have a solution or even a recommendation. I’m just noticing.