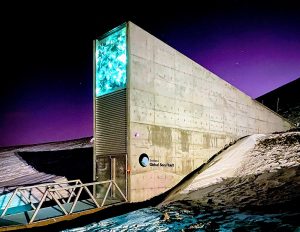 On the cold and inhospitable little Norwegian island of Spitsbergen is an oddly photogenic structure, the Svalbard Global Seed Vault. This austere yet visually striking underground storage facility is intended to secure the world’s agricultural future in the event that some barely imaginable catastrophe threatens it.

I don’t worry much about mass extinctions, v I certainly don’t worry about climate change. And I live way up north, in one of those growth zones where only fence posts, cows, and a few lichens really thrive, so I’m accustomed to plants that scoff at adversity and power on through.

Still, the idea is romantic, and I thought of the Seed Vault last month when I was pondering the current political climate. In particular, I thought about free speech and free association. When a tech giant kicks someone off social media, the victim loses more than a ready platform. He or she also loses a network of connections, some of which may not be readily recreated.

I’ve taken all of my social media time, a lot of my sleeping time, and probably too much of my work time, and I’ve built something in response to the growing wave of censorship and de-platforming. I call it the Freedom Seed Vault. It’s intended to be an online repository of contact information, a way for people who may not know each other outside of a particular social media platform to get connected in a way that Facebook, YouTube, Google, Twitter, and Amazon can’t break.

I invite anyone interested in it to try it. It’s a bit of a work in progress, and certainly nothing flashy (I don’t do flashy), but it’s live now. Take a look if you see a value in making it easy for people to find you if your favorite social media site kicks you out — or if they get kicked off of theirs.

You’re welcome to start by connecting to me. Click the link below, create an account (and you can make it as anonymous as you wish; privacy was a major emphasis here), and you’ll always know where to find me on the internet. And I’ll know where to find you, if you have any interest in being found.