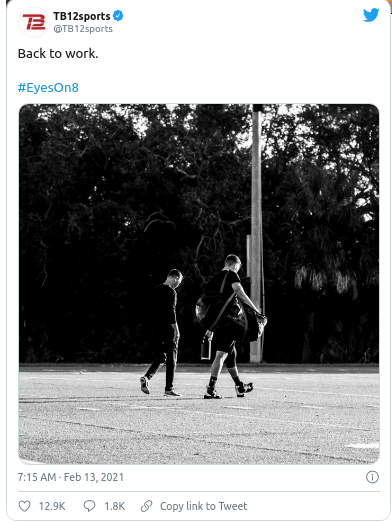 Tom Brady is more than the old guy. His focused, disciplined professional life is exemplified by this quiet photograph, capturing the moment that is the first of many foundational to a realistic campaign for an 8th Super Bowl ring.

For context, no other player, every, has earned even seven rings. Charles Haley retired with five. Thirty-two players have earned four rings, of which only one, a kicker, is still an active player. So, Tom Brady has no one even close to breathing down his neck, and no reason to believe anyone will equal his current championship tally even if he lives to a very ripe old age.

Of course, Brady is also doing what an athlete must to maximize the chances of an active old age, not crippled by the long term effects of old injuries. Staying in the very best shape at all times and keeping game reflexes sharp is the best way to survive one brutal season after another.