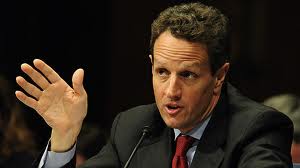 Yesterday, Peter Robinson called for Tim Geithner’s resignation. He was by no means alone in doing so. Indeed, Geithner himself not along ago&nbsp;signaled a desire to move on, but he has not done so, and quite recently&nbsp;he indicated that he will probably stay on well into 2012. President Obama has reportedly asked him to remain. I think I know why.

Back in late September, 2009, Charles Gasparino wrote a column&nbsp;for The New York Post&nbsp;in which he reported that, although they would not admit anything of the sort in public, people like Morgan Stanley’s John Mack, BlackRock’s Larry Fink, Greg Fleming (once at Merrill Lynch), JP Morgan’s Jamie Dimon, and Goldman Sachs’ Lloyd Blankfein – all of whom backed Barack Obama at the time of the financial crisis in the Fall of 2008 –&nbsp; had come, in private, to express grave misgivings regarding the President’s policies. Even more to the point, he added,

I’m told that Treasury Secretary Tim Geithner and chief economic adviser Lawrence Summers have both complained to senior Wall Street execs that they have almost no say in major policy decisions. Obama economic counselor Paul Volcker, the former Fed chairman, is barely consulted at all on just about anything — not even issues involving the banking system, of which he is among the world’s leading authorities.

At most, the economic people and their staffs get asked to do cost analyses of Obama’s initiatives for the White House political people — who then ignore their advice.&nbsp;It’s almost the opposite approach, the Wall Street crowd complains, from the last Democratic president, Bill Clinton, whose main first-term achievement — deficit reduction — was crafted by his chief economic adviser, Robert Rubin. . . .

Obama, according to Wall Street people who regularly deal with his economic and budget officials, is acting as if he has a blank check to do what he wants, while ignoring the longterm costs of his policies.

As one CEO of a major financial firm told me: “The economic guys say that when they explain the costs of programs, the policy guys simply thank them for their time and then ignore what they say.”

In other words, the economic people feel that they have almost no say in this administration’s policy decisions.

At the time, I wrote for Powerline a piece entitled Obama’s Wrecking Crew. After quoting liberally from Gasparino’s column, I observed:

None of this is surprising. Everything that Gasparino says makes perfect sense. Tim Geithner may have played fast and loose with his income tax returns, but he is no fool. Nor is Larry Summers, and Paul Volcker – who, under Jimmy Carter and then Ronald Reagan, began the painful progress of bringing the stagflation of the 1970s to an end – is a man to whom we all owe a debt of gratitude.

Geithner is a relatively young man whose time has come. It is understandable that he would suffer, at least for a time, in relative silence. Larry Summers is in a different position. Within the world of economics, his is a name to be conjured with; and, unlike Paul Krugman, he has not in public prostituted himself for partisan advantage. It must be excruciating to watch while Obama’s wrecking crew destroys the foundations for American prosperity. For Paul Volcker, who is a senior statesman, it must be much worse.

At some point, if these men have any self-respect, they will have to separate themselves from the current administration. At the time of the campaign, there were plenty of indications of Obama’s radicalism. But the Democrats on Wall Street and many of our leading economists chose to look the other way. Now a number of the latter find themselves associated with an administration that cares far less about American prosperity than about rearranging economic, social, and political relations in the country to their own liking.

Paul Volcker, who is now eighty-four, quietly retired from the fray&nbsp;back in January. If he is dismayed at what he helped Obama accomplish, he has not yet spoken up. Larry Summers left at about the same time. Christina Romer and Peter Orzsag went even earlier. None of them resigned in protest at what Obama was up to. None of them has to date leveled criticism at the administration. Orszag’s recent response&nbsp;to the S&P downgrade of our debt could have been written from inside the ring. In the end, these folks prefer partisanship to prudence when it comes to policy. But they have the advantage of having distanced themselves from the policy. Tim Geithner, who stayed on too long, is now left twisting in the wind. He wants out, but the President will not let him go. For this there is a reason. Barack Obama desperately needs to get past the debt debate. The deal that he signed on to with Senator McConnell and Speaker Boehner was aimed at getting the question of our insolvency off the front pages, and for this he was ultimately willing to pay a price – modest cuts in expenditures without tax increases – that would infuriate his political base. But, of course, this maneuver did not work (as, I suspect, McConnell and Boehner expected). As they had long threatened, the folks at S&P responded to the grotesque budgetary imbalance by downgrading our debt. If Moody’s and Fitch are honest, they will follow suit.

If Tim Geithner were to resign right now (or anytime soon), it would be a public admission of failure on the part of the Obama administration, and, I suspect, it would be for Obama himself a terrible psychological blow. He is nothing if not vain. For such a man to admit to himself and to the world that he has been wrong, exceedingly wrong, and that he has done his country and its poorer citizens truly terrible harm would be a horror insufferable. That is one problem. There is another. Geithner’s resignation in the face of a catastrophe would not only be an admission of failure. It would inevitably be the first step towards a change of policy. The introduction of new men is nearly always preparatory to the introduction of new measures. Geithner is a weakling. Had he been a man of strength, he would have resigned on an issue of principle when it became clear that his advice regarding economic policy was unwanted. In the current circumstances, President Obama needs – or thinks he needs – a weakling in Geithner’s post. The President could not find a reputable economist willing to take up office as Secretary of the Treasury today and not be listened to. Nor would the U. S. Senate be willing to consent to the appointment of another toady. In effect, the President would be hostage to the man he chose. Moreover, the hearings on the man’s nomination would bring the debt crisis back into the news. From an electoral perspective, Obama’s greatest nightmare is an ongoing, fierce public debate on the deficit and the national debt that he cannot possibly win.

Nonetheless, that is what he is apt to get. Boehner and McConnell set a trap, and the President fell into it. To put the debate about the deficit on the back burner, the President will have to institute what he and his followers regard as draconian cuts. Otherwise, step by step, the economy will deteriorate, and the debate will not only persist. It will heat up. After all, the natural sequel to a downgrading of debt is a rise in the interest rate the federal government has to pay for the money it borrows. Such an increase would add dramatically to the deficit and intensify the crisis we face. If Obama circles the wagons, keeps Geithner in place, and digs in his heels – as he is wont to do – things will go downhill quickly.

This is an historic moment. We are facing the crisis of the administrative entitlements state. Progressivism is about to make its last stand.