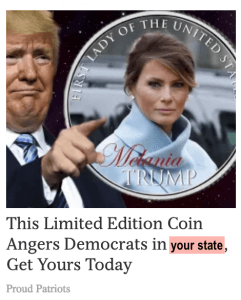 I keep getting ads for the LastSwab, which tries to pretend it’s not about earwax, but kindareally is. I’ve grown to hate LastSwab. The LastSwab “helps combat the billions of single-use cotton swabs that are produced every day.” I have never, personally, needed to combat any kind of cotton swab, but according to LastSwab, I’m not the average person, who “goes through hundreds of cotton swabs each year.” I suspect the average person isn’t LastSwab’s “average person”, either, in that mean swab usage likely dwarfs modal and median swab usage. Even with a family of five now, a pack of 375 swabs lasts us several years. LastSwab seems handy in a travel dopp, but at home?

I know what would happen if I used LastSwab at home: I would lose it. Maybe the kids would hide it, like they do other small objects which aren’t technically disposable but become so once you have kids. No LastSwab would be my last one, which rather defeats the point.

But where was I? Given the incongruous ads I already get, it’s only a matter of time before I see side-by-side ads for both “The Oatmeal Anointing: Empowering your God-given Femininity through Biblically-Blessed Soluble Fiber” and a “Getcher rosaries off muh ovaries!” Margaret Sanger prayer candle. As far as I know, neither of these products exists — yet. Nor do carven pink quartz “crystals” monogrammed RBG, though the consumer’s choice of tchotchkes commemorating Ruth Bader Ginsburg is astoundingly varied. But they will. For one thing, mixing New-Age woo with either Christianity or secular humanism seems increasingly common in a world of postmodern bespoke religion. Secular prayer candles are already A Thing. Even of Melania Trump, if you’re so inclined.

Melania is a beautiful woman, but her face graces some ugly tchotchkes. The ugliest advertised to me so far is a commemorative coin. The coin’s appearance would make a velvet Elvis blush: it’s a coin that looks like a tiny commemorative plate. But that’s not the ugly part. The ugly part is the alienation.

The ad for the coin reads,

This Limited Edition Coin Angers Democrats in [Your State], Get Yours Today — Proud Patriots

What is the point of that coin? Where would you display it to make Democrats so angry? Why do the “Proud Patriots” think it’s a selling point to include the name of my state, as if the coin would be more “effective” in my state than in others? What is this product except an excuse to hoover off a few bucks from someone seduced by the prospect of purchasing the other tribe’s anger with money and commemorating that purchase with a naff tchotchke?

I’ve long loathed patriotic American car commercials for being cheaply manipulative, but it took me a while to articulate why I resent their manipulation so personally: They play on my patriotism, too. If I were immune to patriotic sentimentality, I’d find such advertising less repulsive. But I’m not. So I resent the hell out of its manipulation. I was raised to be patriotic but not sentimental: How dare advertisers find that one rivulet of patriotism even in stoics like me which overflows into sentimentality and then try to milk it dry to sell me something. Ugh! Disgusting.

It would be funny, though, if the Americanness of American-made household appliances were advertised like the Americanness of American-made cars. If swirling Old Glories disclosed small appliances skidding down scenic mountains trailing beautifully-lit clouds of dust behind them. If larger appliances bounded across amber waves of grain with dogs perched nobly in back. If grizzled heartlanders approvingly eyed other grizzled heartlanders over their toasters, silently communicating the trust all good Americans ought to feel in anything American-made. If patriotic clothing tumbled slo-mo in an all-American dryer. If I saw appliance ads like that, I’d chuckle. Even feel affection for the product. Still, probably not buy it, since more prosaic concerns like affordability and space preoccupy the attention of reluctant consumers like me. And what does my resistance to consumerism get me?

As much as I loathe patriotic car ads, at least they aim to exploit my love. They play on my sense of attachment, good attachment. Folks selling you the lie that you can buy magnanimity at least presume you aspire to magnanimity, if only haplessly through consumption. That coin ad? It aims to play on hate. Not so much the consumer’s hate of Democrats; instead, the ad supposes that I, the consumer, will assume that Democrats hate me, and I should revel in their hatred. More specifically, I should revel in how much my neighbors hate me, hence the ad’s mention of my particular state — or, if the ad were more targeted, as some are, my particular town.

The coin advertisers may call themselves Proud Patriots, but their advertising exploits political alienation, not patriotism. Display your “patriotism” by distancing yourself from the actual Americans around you! Brilliant!

Except, a coin isn’t for displaying patriotism — or even partisanship. A bumper sticker — an item made for display — reading The only good lib is a disenfranchised lib might, in fact, anger the Democrats in your state, as the coin promises to — that is, if you actually put the sticker on your car and drove around with it.

But this coin? Who is it for? It’s not for the Democrats in your state, despite the ad. It’s not for your neighbors. The right may have its share of kooks, but most of us aren’t kooky enough to accost random neighbors with numismatics, not even to score political points. Those closest to us may witness the small detritus of our lives, like coins. But a coin like this is mainly just for you. It’s a talisman, not a display. A talisman for you and your alienation. The talisman of a small god — and alienation is a small god indeed.

This coin ad’s sad attempt at patriotism only inspires earwax-level disgust, not the desecration-level disgust of an effective “Buy American” car commercial. The ad can’t revolt me, just annoy me, since it doesn’t repulsively exploit the good of patriotism. Patriotism expressed through alienation is a broken patriotism. It is not good. It is, arguably, not even “real” patriotism, though it’s real enough in that it’s the patriotism enticing more and more Americans — on both sides of the aisle — at least online.

Is “bottom feeder” online advertising just that bad, or are we becoming an AlieNation?