In early 2016, not long after we moved to Nebraska, Mr. Midwest and I began what now feels like a sacred nightly routine.

Once my workday is over and my “have-to” list is complete, including some exercise, I leave the home office and join Mr. M (and sometimes my mother-in-law, a.k.a. Bonus Mom, who shares our home with us.)

First, we turn on the Twitch livestream of our friend, Jack Danger. It’s just him playing one of the pinball games in his collection, accompanied by random (and sometimes inappropriate) commentary. While that’s on, we catch each other up on the day’s events and any news from our almost 25-year-old son while putting something together for dinner.

Then we watch an episode of whatever series we’re , watching at the time.

Then we enjoy about 30 minutes of some of our favorite YouTubers, typically in this order:

— A short update video on the Dallas Cowboys from here or here.

— One or two filmmaker videos that show some cool technique or new camera or lens. Like this guy or this guy, and even this guy. Oddly enough, they’re all from Canada… weird, right?! Perhaps it’s time for Mr. M to start his own…

— Then some of the Walking Commuter’s daily video of NYC. I’ve particularly enjoyed this week’s videos because NYC is blanketed in snow (one of my most favorite things.)

Our “watch sessions” are always punctuated with our commentary and discussion on the client and video/film projects we are currently working on and, of course, jokes and banter.

But our day together is not complete until we watch the live penguins cam at the Kansas City Zoo. Mr. Midwest has even semi-adopted and named one of the birds “Slippery Pete” because (1) it’s a tongue-in-cheek hat tip to the show “Sneaky Pete,” and (2) Slippery Pete is usually up to some funny shenanigans. 🐧 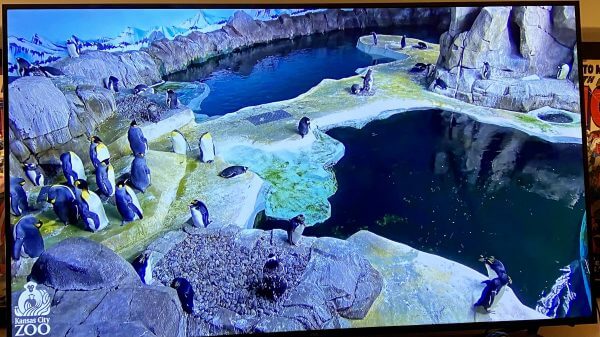 Maybe it’s weird that I snapped a photo of our tv while we were watching the penguin cam? Oh well. ;)

Mr. M and I have almost opposite schedules, so I go to bed long before he does. I put an exclamation mark on my day with a little time here on R, followed by some journaling, reading, music, and prayer.

With long, intense work hours, the routine and recreation of our evenings help me untie the knots of the day, lighten (and sometimes quiet) my mind, and settle back into myself. A nightcap doesn’t hurt, either.

What routines do you have that you look forward to each day?