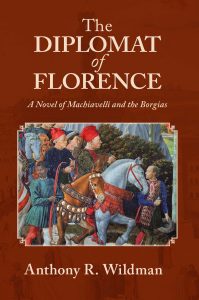 Along the way Wildman has Machiavelli encountering a slew of famous individuals from the period. This includes he meets in his diplomatic missions such as Louis XII of France and Cesare Borgia, Duke of Valentino. It also includes others such as Leonardo da Vinci and Thomas Cromwell (later an advisor to Henry VIII of England) with whom (at least in this novel) Machiavelli becomes friends. Readers also get feeling he would like to have become friends with Cesare Borgia.

These friendships are plausible. It is one of the things which make this novel fun. The historical Machiavelli admired Borgia, as is made clear in “The Prince.” “The Diplomat of Florence” has the touch of a bildungsroman, focusing on the lessons Machiavelli learns over the course of his career. You see how the events in his life contribute to his later writings

The result is a first rate depiction of the events of the period in France and Italy. It also provides an amusing look at life inside a government bureaucracy. The machinations within the government of Renaissance Florence and that of today’s Washington DC seem almost interchangeable.  Equally fascinating is the depiction of Florence trying to balance Pope against France, as it tries to maintain its independence as a small, mercantile state among competing sovereignties.

“The Diplomat of Florence” offers an entertaining introduction to Renaissance Italy. Wildman makes Machiavelli a sympathetic protagonist, one with whom readers would enjoy sitting down with and having a glass.