Today was Open Hearts Day, a.k.a. Diversity Day at my school, an occasion that admin has been talking up for weeks now. Some of you might have had similar diversity training experiences at work; I’d be curious to know if this is similar to what you’ve been through.

My first year at school, we literally called this day “Diversity Day.” Each homeroom put a table outside their classroom in the hallway and the students placed items on the table that reflected their ethnic heritage. I put my globe on the table with bright dots to reflect the different places that my students’ families had come from. Then we all walked around and admired everyone’s tables.

Such a simple, wholesome event couldn’t last long. A small vocal contingent of students, all black or Hispanic from Chicago and housed in the boarding program (the daily commute from their homes would be too far) and nearly all recipients of scholarships for economically disadvantaged students, began complaining that they had encountered many students who had “committed microaggressions” and “incidents of racism.” They threatened a walkout on Instagram, claiming that anyone who did not join them was racist. The admin got wind of it from the hysterical parents of their hysterical peers and thus ended the simple Diversity Day and began an orgy of “hard work” to root out the “systemic racism” in an otherwise utterly normal little high school.

So today was our second Open Hearts Day. We had three sessions: the whole school listened to an actually interesting presentation by Christo Brand, one of Nelson Mandela’s jailers on Robben Island. He spoke frankly about Mandela’s decision to judge people without reference to the color of their skin, a message that was completely contradicted by every other session offered.

There were two other mandatory sessions during the day. I chose the most innocuous ones but the choices were iffy: “Implicit Bias is Global,” “Discovering and Understanding your own Biases” (where, for the benefit of the aforementioned aggrieved group of the students, case studies of microaggressions at school were discussed in small groups anonymously- Soviet-style), and “Social Awareness that Impels to Action”. The session I attended focused on the United Nations: “This session will provide an opportunity for conversation about how International Day of the Girl inspires “understanding implicit bias and becoming allies for one another.” It opened with an “acknowledgement” of the fact that our speaker on Zoom was talking to us from “stolen land” and went on to name the tribes. She then reminded us that our school was also on stolen land and told us the names of those tribes. When she tried to start a conversation around the ideas of allyship etc, there was dead silence. No one spoke. A few attempts were made to get things going, but it was like making a fire with damp wood.

The second session was “Service, Solidarity, and Sustainability” in which we learned about why people do service and why 85% of people doing it in the US are white and can fall victim to the savior complex. We got to see selfie-style pictures of young women and men (all white) in Africa and Southeastern Asia posing in groups of smiling young children. I particularly enjoyed the animations of a voluptuous white woman wearing hot pants, barely covering her bottom, leaning over a young African boy in some kind of school setting (different image from the series below). 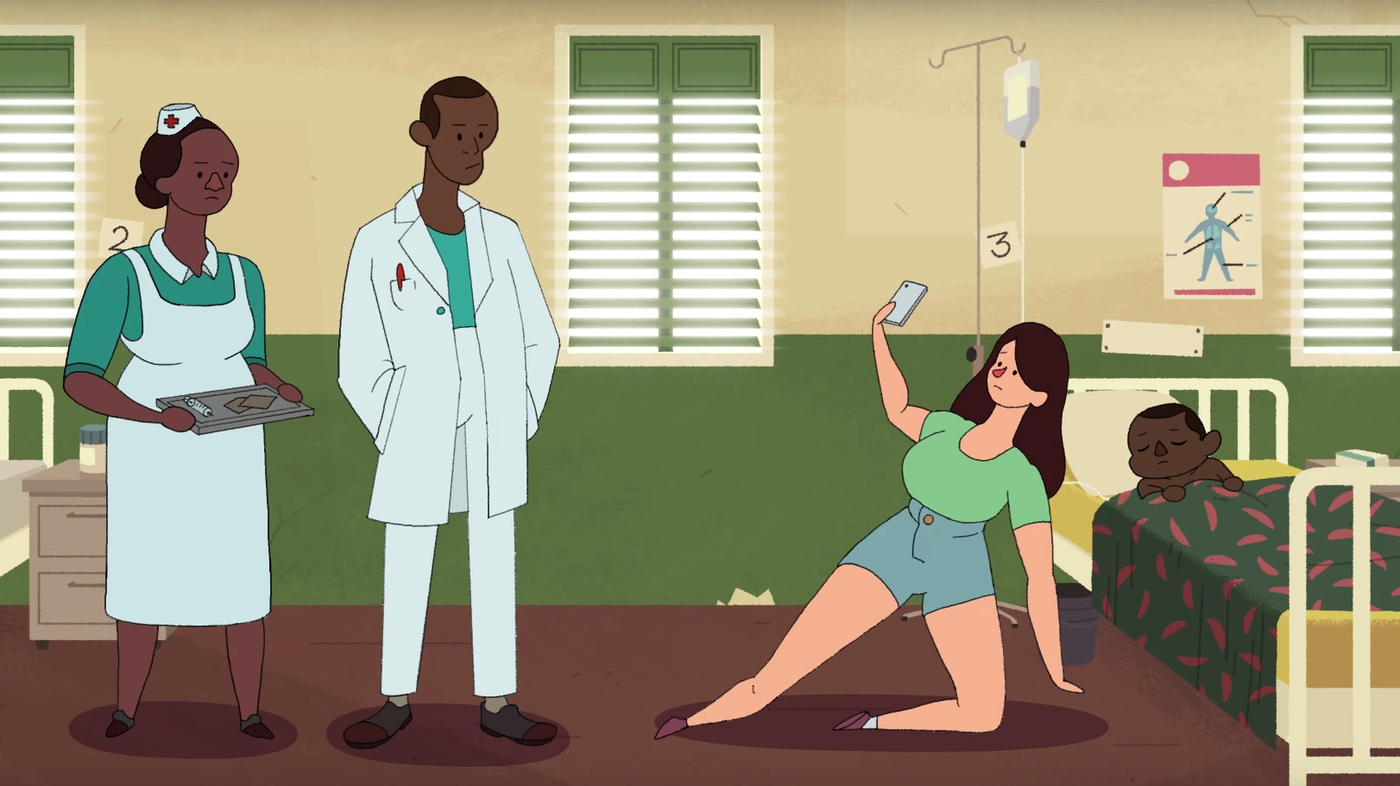 The saddest part of the day, however, was when a young sophomore student came to ask me if I thought it would be alright if she left school at lunchtime. She closed the door and said that she was so very uncomfortable (as you can imagine!) being a conservative during this “Open Hearts Day.” She told me, “I know I’m supposed to be able to talk but I just can’t-“and it was a betrayal of her values to pretend she agreed when she really did not. Her mother had told her not to stick her neck out because the other students would just get hysterical. I told her it was fine for her to go home. She comes to school for academics, after all, not this kind of politics. It felt like a conversation that parents might have had in a communist regime.

What will be the result of this kind of education? If admin is only ticking boxes to appease the unhappy boarders, the damage they are doing to the others is considerable. There is no moral courage here- and I feel so sorry for it.