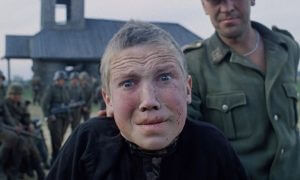 The above quote was written on the walls of the Mauthausen concentration camp by one of its prisoners, and may as well be the epigraph of the whole war, for there is not a faith so strong to not be shaken by the evils committed then. Nazi forces occupying and later burning villages and their inhabitants in the regions that are now Belarus is one such evil, and director Elem Klimov illustrates that in starkest detail in his 1985 film ‘Come and See.; A quick web search shows it has a reputation as not only an artistic triumph but as one of the most unbearably bleak films ever.

It begins not so bleakly with two boys playing in the sand. Against the wishes of the village elder, they’re digging for rifles left behind in a prior conflict. One of the boys, Flyora, is only fourteen and eager to find the gun so he can join the Soviet partisans. The movie is matter-of-fact in how it depicts these early scenes. It doesn’t appear it wants you to feel any particular way about what’s on-screen, not when Flyora’s mother weeps and begs the partisan soldiers not to take away her son, not when he arrives at the camp and the soldiers laugh and joke while setting up a group photo. His enthusiasm is sincere, and if the film’s reputation did not precede it, you might expect a better outcome.

It’s not long before the naivete that fuels his enthusiasm begins to crumble. On guard duty, he’s told to shoot anyone who doesn’t know the password, a command we are immediately shown he is incapable of upholding when he lets past a girl who may know the password but can tell he is unwilling to do anything if she doesn’t say it. She is Glasha, a nurse a little older than he. She is warm and playful, and they’re a comfort to one another after the soldiers leave them behind at the camp. She starts teasing the boy when they’re interrupted by a deafening bombardment from German planes. The two escape the notice of German paratroopers and head back to his village which is completely abandoned so he leads her through a bog to an island where he’s sure the inhabitants fled to. They reunite with partisan forces and he goes with them to fight the enemy.

I’ll stop the summary of events here not so much to avoid spoilers but because the plot doesn’t enjoy the premium that a Hollywood production would put on it. It is a film that is felt. The critical consensus does not overstate the bleakness of Come and See. It is as apocalyptic as the Book of Revelation verse from which it gets its title. Few movies dare provoke the despair and anger Klimov does here, and of those that try even fewer succeed. Of course, the fact it depicts real events gives it a leg up working the audience’s emotions—Klimov wrote the script with Ales Adamovich who fought with the partisans in Belarus when he was the age of Flyora—but the events, horrific as they are, would not affect viewers so deeply were it not for the artistry with which they’re portrayed. Klimov directs with assured confidence, his touch so deft, so steady, yet propelled by a boiling rage, the kind that makes your limbs quake.

Consider the sound design. Sequences are accompanied by the likes of Mozart and Wagner, but it doesn’t have a score in a traditional sense. Instead, scenes are buried in ambient drones, or diagetic soundscapes from the barrage of bombs falling and the squealing tinnitus that follows, to the oppressing silence in the empty village, to the sloshing of bog water as Flyora and Glasha trudge their way to the island. And the wailing: the wailing of survivors grieving their dead and the wailing of villagers being herded from their homes into a barn and the wailing once they’re crammed in so close they become a roiling mass of heads and arms. 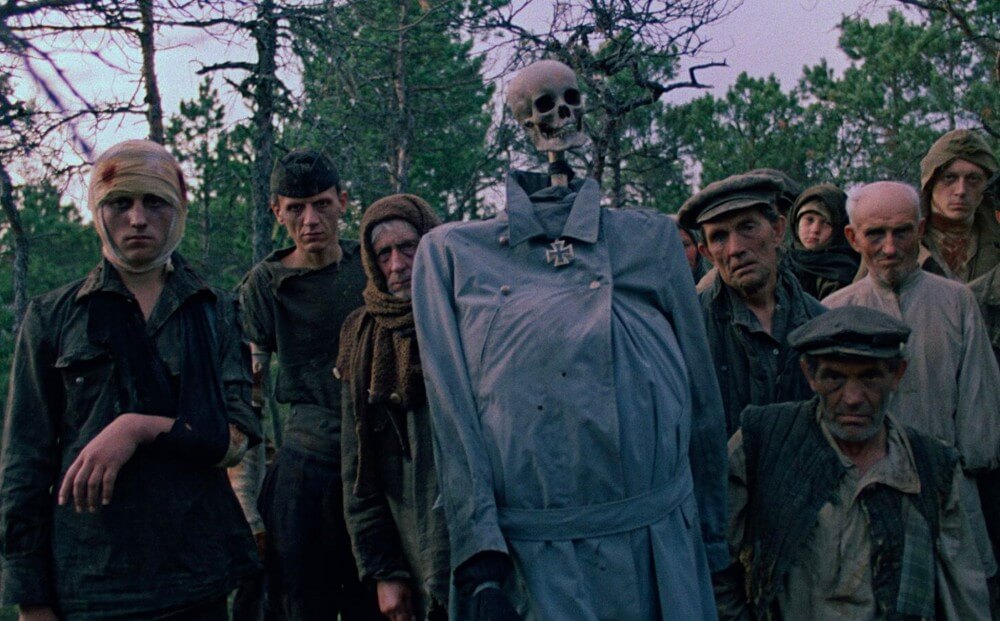 Visuals are equally important to the film’s nightmarish vision. Klimov shot only with natural light. The colors are muted and the lighting dims, especially for indoor scenes. Everything is drab, but it’s a convincing drab unlike those color-corrected abominations clogging streaming sites and theaters. From frame one we are struck by the aspect ratio, 1.37:1 (the “Academy ratio”), a rarity in a movie of this vintage that wasn’t made for television, and nearly unheard of for a war film. No panoramic landscapes, no beautiful vistas, no grand battlefields, no sweeping shots of unit formations, only a growing feeling of being confined, of not knowing what lays just offscreen. It becomes as asphyxiating as that barn stuffed with villagers.

The framing is also perfect for an unusual motif: characters staring straight into the camera like a classical portrait. These shots appear throughout the film and Klimov uses them to every effect possible. There’s Glasha and her reassuring smile, Soviet commander Kosach and his expression stony and resolute, a Nazi soldier shaking his face then cackling, the SS officer staring with indifference, but most of all there’s Flyora. We follow him throughout and his evolving portraiture is a roadmap of his mental descent. At first the bright, young recruit, then the timid soldier losing his confidence, then a soul so wrecked by grief he’s unrecognizable. In shots that have become iconic, we see him, his head sunken so his clavicles cradle his chin and the black shoulders of his shirt look on their way to surpassing his face, its features mangled into an expression of terror. With close-ups, Klimov actually emphasizes how small Flyora is. He looks younger by the end of the film. The bags under his eyes, the brow furrows and stains of dirt and blood look so wrong on a face like his. Credit must be given to the makeup department, though above all others Aleksei Kravchenko, who was not a professional actor, deserves praise for his searing performance.

Some imagery goes from the horrifying to the grotesque, such as a makeshift scarecrow topped with a human skull, outfitted in Nazi attire, and which the partisans haul around with them, or the final darting dance of the eye of a dying animal, or a hallucinatory montage near the film’s end. The film is so unsparing, it’s almost understandable how the Soviet censors didn’t approve the script for seven years, despite its favorable treatment of partisan forces.

I feel obligated to comment on a common remark about the film. Many say it, and non-American films in general, portray the harsh reality of war that jingoistic Yanks would never touch. Rah-rah patriotic movies about the glories of war exist worldwide. Not surprising since the same themes have had a constant presence in art through the ages and throughout cultures. Also, American filmmakers haven’t always shied away from the atrocities of war. Their depictions might never have been as piercing as Come and See, but that’s true of most movies everywhere. The most important factor for the discrepancy in how the cultures portray war, WWII in particular, is the difference in how the countries experienced the war. America joined late, and its involvement was confined almost exclusively to the military, many of whom were volunteers. Many of those soldiers weathered the unimaginable; their sacrifices and the sacrifices of those on the homefront cannot be overstated nor their contributions overvalued—they were liberators—but the war was entirely different to many countries in Europe, Asia, and Africa, countries who were invaded and destroyed, who had cities burnt to the ground. My AP History teacher told our class about traveling to Europe in the 60s or 70s and visiting small villages that were missing an entire generation of men. An invasion like the one of the Nazis against the Belarusians is a violation, a rape: a descriptor the film shows is sadly often not metaphoric.

Come and See does not end with a glimmer of hope because the hope it offers is not the sort that glimmers. It is a dull, tiny thing. There are soldiers remaining and they will continue to fight for their homeland, but, as viewers know, the year is 1943 and that means there are years left of fighting and those years bring horrors as Flyora has just witnessed. 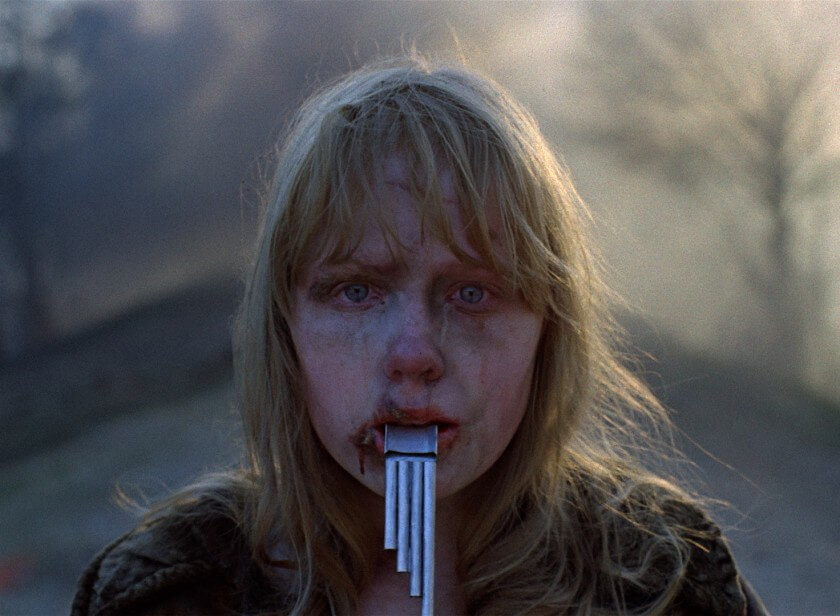