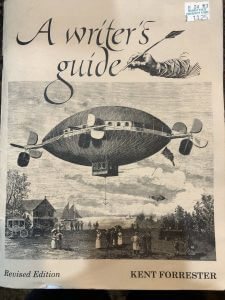 In their appeal to the common reader, grammar books probably fall somewhere between the little pamphlets with a list of warnings that come with power tools (“Don’t put your hand into the path of the bandsaw”) and the stapled pages of how-to instructions for crocheting penises (“Knit one and purl two, perv!” See postscript.)

About fifty years ago when I still had ideals and ambition, I put my heart and soul into writing a grammar book.  My sole surviving copy is a bit worn and shabby, but here’s what it now looks like.

Yes, I can conjugate the hell out of verbs and you can’t. (Ok, what’s the past participle of lay? How about the future perfect continuous of sidle? OK, I don’t know that one, but I think I knew it once.)

You may spend your days emulating the spirituality of St. Francis of Assisi, but that will not save you from grammarians. We lay waste to all ambitions, moral and otherwise, and only find our true selves in pettiness.

You may have written a brilliant essay in which you prove, once and for all, the existence of God, but a grammarian can ruin your feeling of accomplishment by pointing out that you used I when you should have used me. How can a writer prove that there is a God, the grammarian asks rhetorically, when Mr. Would-Be Theologian doesn’t even know that I is a nominative pronoun and that me is an object pronoun and therefore follows a transitive verb or is the object of a preposition? (The misuse of I for me is sometimes termed, by grammarians, a case of pompous over-correction. The word I always sounds more refined than the humble me — and therefore seems correct, even when ungrammatical, to the linguistically challenged.)

Enough of that. I sense your eyes have already begun to glaze over. Here follows a few solicisms that harsh this grammarian’s mellow. (Thanks again, Doc Jay, wherever you are, for that mellifluous phrase.)

Mrs. She always writes rings around me — and most everyone else —  but I caught her using disinterested for uninterested on her last post. Yes, yes, I know, that particular usage has been violated so often in these modern days of loose morals and lax standards that it now shows up — mon Dieu! — as standard usage in dictionaries and grammar books.

But not mine. In the good old days when real men still drove big, American, eight-cylinder Detroit iron, disinterested meant unbiased, not uninterested. Alas, we now drive little Japanese cars and write, “I was totally disinterested in playing marbles when I was a kid.” So we’ve lost a useful distinction between two words that were once disparate but which have now, unfortunately, merged. Shape up, She.

Here are a few other solecisms that frost my cookies:

•  The confusion of lie and lay. Your purse lies on the table. It doesn’t lay there. When you place it there, you are laying it there. I corrected my wife Marie a few times on this, but I could see that she was becoming annoyed. So before I think about correcting her these days, I first tell myself that discretion is the better part of valor. And that keeping one’s mouth shut is the better part of a marriage.

•  It’s used for its. It’s is a contraction, not a possessive pronoun. This error shows up with some regularity on Ricochet.

I’m also annoyed by sportscasters who say, “There was a huge differential between the two scores.” In their pomposity, sportscasters have a fondness for differential over the simple and direct difference. Howard Cosell used to set my teeth on edge.

Grammar is a noble undertaking. At its most basic and useful, it describes standard language usage. I think W.B. Yeats was thinking about the decline of a knowledge of grammar when he wrote these famous lines:

Whenever you write a post for Ricochet, I silently (except for my comments on Mrs. She) take note of your grammatical, rhetorical, and lexicographical failings. For the time being, you’re safe — I would not be so crass as to point publicly to your errors — but you will be punished for them in the afterlife. 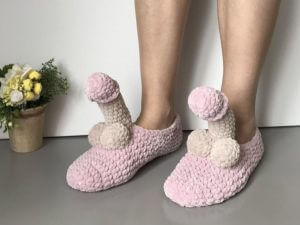 Postscript: Crocheted penises are apparently a thing.  Etsy, the website full of handmade goods, contains page after page of crocheted penises — from penis toothpaste holders to penis hats, from penis masks to penis cat toys, from penis pillows to penis potholders.  It’s easy to imagine a circle of women sitting around giggling as they crochet these various iterations of penises. I came across a pair of penis slippers that are so handsome that I thought I’d share the above photo with you. 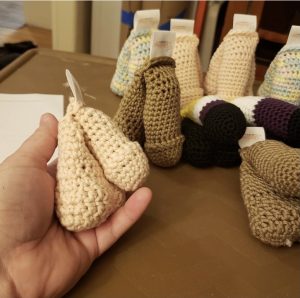 I found a few crocheted penises that were to be used as a faux phalli, one of which was designed for transsexuals as young as five. With a little crocheted penis strapped on, your little trans toddler can walk around confidently with a stylish bulge in his/her little trousers.