No serious person who has read or heard what Trump actually said believes that. It didn’t happen. Incitement, by the way, is a legal term of art. You can look it up.

But Facebook and Twitter obviously didn’t stop with President Trump. They appear to be conducting a full-on purge of self-identified conservatives. Others report a large loss of followers, including former Ambassador and Director of National Intelligence, Ric Grennell.

I didn’t lose anyone because I terminated my Twitter account before the election. The censorship was the icing on the cake. Twitter is a cesspool, a virtual Mordor of division, hate, insults, misinformation, faux outrage, clickbait, and self-promotion. And Facebook is arcing in that direction.

It wasn’t always that way. When I joined Twitter in 2008, I found it to be a terrific news aggregator. Facebook served a different purpose – it was a wonderful forum for finding, reconnecting, and staying in touch with friends. But even there, former Facebook friends are using the platform to push political narratives, pearl-clutch, and infect that forum with the same misinformation and propaganda featured on Twitter.

While you can manage your feeds to mute, unfollow, or remove friends – I’ve done that with Facebook – it saddens me that the over politicization of those forums have contributed to me losing a handful of friends over the years. Not everything is political, and we should not be judged solely by our political views. I have plenty of Democratic family and friends, from college professors to family. I love them all. We disagree – it doesn’t mean we’re enemies. We just place boundaries around our discussions.

I did leave Facebook for a while (I’ve returned, but I’m wondering why), and in doing so, exploring alternatives. Let me share my experiences with each of them, and you can decide whether to migrate there or not. Regardless, if you’re upset over “Big Tech” censorship, you should do something about it.

Parler.com: Parler is recognized, currently, as the “go-to” alternative to Twitter for conservatives, thanks in large part to conservative podcaster Dan Bongino, who is an investor in the site. Many of the center-right journalists I followed on Twitter have migrated there. It is a clunky site, with a laborious sign-on process. It is a work in progress, lacks a few features of Twitter and other social media, but it does give you 1,000 characters for your posts, versus Twitter’s 240. They had traffic issues last night (January 8th) with a flood of people checking them out or joining. You can find me there at @Bucknelldad. They don’t censor, so you will find some loony groups and others. Parler’s app for iPhone works well.

Clouthub.com: Clouthub works best on your smartphone – that’s what it seems to be designed for. The Apple app is smart and navigable. They do have some loony groups as well, but they are a free speech forum, so that’s to be expected. It has a nice newsroom function. Its channel function connects you with a compendium of conservative broadcast media. The downside is that I can’t figure out how to get past the promotional stuff on my feed. It is relentless. Building your feed to be something useful will take some time, more so than Parler, it seems.

USA.Life: This site bills itself more of an alternative to Facebook, and it certainly looks like their competitor. It has many of the same features as Facebook and other social media sites. The major difference is that it, too, is very political (conservative). And like the other site, it will take some time to build friends and followers. I was not successful in encouraging my Facebook friends to follow me there. People just don’t want to invest the time given their well-established Facebook feeds. I get it. USA.Life, unlike Facebook but liked LinkedIn (a professional, largely non-political site not discussed here) has a “premium” feature to subscribe. I’m there at @Bucknelldad. Oh, and USA.Life does not have an app – you’ll have to use a browser.

MeWe is the latest Facebook competitor. It is a nice site but the smallest of the entries. It is simpler and has nice group categories that are decidedly nonpolitical. It also has a “premium” function that it relentlessly promotes. It strikes me as the most likely potential “successor” to Facebook since it doesn’t focus as much on politics as USA.Life, but it has a ways to go. I am finding a few friends and others who have migrated there. They also have a nice app for the iPhone.

Spreely: I like the organization of the site, with your feed accompanied by the news. It also allows you to easily create pages, but I was unable to move my blog there, given the lack of space they provide. It’s not suitable yet for hosting a blog site if you’re into that. My only complaint is the slowness of the site – it takes the longest to get on, to sign on, and to load. Spreely also has a “TV” function featuring conservative media (NTD, an affiliate of the estimable Epoch Times, is prominent there). They have a nice app, but it doesn’t work well on an iPad – just the iPhone (for now).

Gab: I don’t like Gab. It has attracted too many nutcases and people with nefarious intentions. I’ll leave it at that. Maybe it has changed since I checked them out a couple of years ago.

There may be others (I’ve never figured out Reddit), and I apologize for not mentioning them. These are the ones who’ve captured the most attention, it seems. All have potential, but nowhere near the audiences yet (other than Parler) to seriously threaten the censorious Twitter and Facebook.

The issue with all these sites is that they remain relentlessly political; the one that can attract a “community” or personal “feel” may be more likely to succeed, at least the ones who want to become the next Facebook (no one should want to become Twitter). And also, will anyone be willing to take the time and effort to bring their friends and allies along, and be patient enough while they rebuild their audiences and networks? When I quit Twitter, I walked away from nearly 3,000 followers; I haven’t even reached 300 on Parler yet. I wonder if I’ll ever be able to build what I had at Twitter. Maybe that’s not such a bad thing, given my experiences on Twitter. 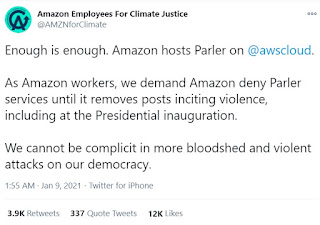 Here’s another problem facing these alternative sites – they have to rely on “Big Tech” to publish and promote themselves. Their platforms rely on Google (note how Google is threatening to deplatform Parler from “Google Play” for their failure to censor as they do). So has Apple, apparently. Google, Microsoft, and some of their partners have a near-monopoly status for much of the tech architecture that we all use. Even Amazon employees are in on it.

Have you tried to “unGoogle” yourself? It is hard. I am in the process of doing that, but it will take some time. I now use Vivaldi.com as my browser (it is fantastic), along with DuckDuckGo as my search engine. I’m migrating my email to reagan.com, which is not free but doesn’t sell information about you. Rumble.com is emerging as an alternative to the censorious YouTube. and I’ve unsubscribed from YouTubeTV to moved to Fubo TV, which is slightly cheaper and features more networks (especially if you like sports). Building alternative sites is one thing – getting them to work and promoting apps and access is quite another. And let’s talk about our smartphones, and how those companies are censoring and tracking what we see and do with their app stores and whatnot.

So the world of social media, especially for conservatives, is evolving. The same is also true for broadcast media, from Newsmax to BlazeTV. There’s no shortage of alternatives, but again, they all pale in comparison to what Rupert Murdoch has built. My one big regret is that finding universal community forums where we can all communicate with each other civilly and respectfully may be impossible. Tribalism seems to be the order of the day. But we have the corporate media, which has monetized division, and Big Tech primarily to thank for that.

In the meantime, let the free market sort this out, and hope that Big Tech doesn’t destroy it.