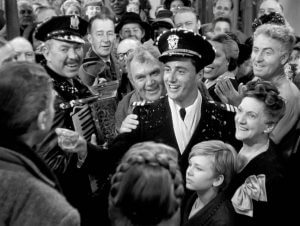 By a show of hands, how many of you have never seen It’s A Wonderful Life? It’s okay, don’t be shy. Until I was married I hadn’t seen it either, and I was no stranger to old movies. I am a movie nerd, I used to program my family VCR to record movies in the middle of the night. I grew up with Gone With The Wind, Mommy Dearest, and Shenandoah playing in the background. But somehow I managed to miss It’s A Wonderful Life, or tuned it out when it was on.

That changed a week or so before Christmas in 1998. Another couple who’d never seen it decided to join us in watching it for the first time, and I suspect I was more interested in the take-out pizza and coffee with Schnapps than the movie. I was tasked with driving to Video City to make the rental, but when I got there the three copies they had were all checked out. I looked around for a different movie but noticed they had some VHS copies for sale that even came with a little bell Christmas tree ornament. If we’d had cell phones back in those days, my wife probably would have told me not to buy it.

It’s supposed to be a classic, I reasoned, and figured it would fit nicely next to my VHS copies of Casablanca and Schindler’s List.

I made my way home to the two-bedroom apartment and the four of us settled in to watch the old movie with varying degrees of interest. Two hours later, four twenty-somethings were smiling, moved (maybe to tears), and experiencing what can only be understood by those who’ve seen it.

It’s A Wonderful Life is more than a classic film; it’s a perfect film, and I don’t say that lightly. Nor am I alone. For a more detailed explanation about its cinematic superiority, check out the Critical Drinker’s review — after you’ve watched it, that is, because spoilers abound. But that’s not what this post is about.

A year after that first viewing, my wife and I decided to watch it again, maybe with the same couple, maybe with others, I don’t remember exactly. We loved it all over again and it became a tradition. We started calling it It’s A Wonderful Life Night, a Guerra tradition that’s continued for 22 years. Every year in mid-December we invite a few families over, provide two big pots of soup (my wife makes great soup) and fresh bread. Guests are welcome to bring a sugary snack if they want to, but it’s not requisite.

We start the party at 5:30, start the movie at 6, and let them know they can stay as long as they want, which almost always ends up being well past everyone’s normal bedtime. It’s an event dedicated to simplicity, fellowship, coziness, and fun.

Over the years the faces have changed; so have our houses. There are some old friends who are always invited, others who have moved out-of-state (but we’re working on luring them back), and usually a family or two we’ve been interested in getting to know better.

As the families arrive and get settled in, the quiet atmosphere punctuated by candlelight and Christmas lights becomes loud and lively. The movie starts and everyone gets their bowls of soup, settling down in some area of the house. Often the older kids and a couple of dads engage in conversations and have no interest in the movie, so talk during the whole thing. That’s fine because something interesting always happens, usually right around the time George and Mary fall into the pool: The story captivates them and they turn their attention to the screen. They even put away their phones.

Soon everyone — even those who’ve seen it over 30 times — starts paying attention. It draws them in and the characters play out life’s (sometimes brutal) truths, truths that 22-year-old newlywed Vince understood one way, but that 35-year-old Vince with four kids saw another. Now, 44-year-old Vince with eight kids and no steady income feels George Bailey a little differently than that younger Vince did, with a top-notch health insurance plan and a Christmas bonus in his pocket.

By the time Harry Bailey hoists his glass, everyone is hanging on his words, even the teenagers — just like some of them used to, when their little hands gripped mugs of hot cocoa that were too big for them to finish when they first watched it ten years earlier.

The movie ends, our guests smile, and the conversations that flow from those viewings over the years have been as variable as the times we’ve lived through — sometimes light and silly, sometimes deep and serious (like this year), but always valuable.

It’s A Wonderful Life reminds us that there is no shame in feeling the weight of the world on our shoulders, or even in calling out to God for a Christmas miracle when all other human options have failed.

When I think back on the friends who’ve shared that night with us, I’m reminded of the important lessons of the film: the connections we make with people are what matter most, and the part we play in other’s lives, even if they’ve floated away from us, will count for something in the end.

Fun fact: Due to its initial lackluster reception, It’s A Wonderful Life became public domain and the current licensing rights are complex. As a result, you can watch it several places for free.

Millennial Movie Monday is a fun, YouTube reaction series. Her reaction to It’s A Wonderful Life is as it should be.