I’ve done further analysis of the Coronavirus death data for the US. Specifically, I calculated the seven-day moving average of reported deaths for each state (plus DC), from the beginning of the outbreak in early March through December 10. My goal was to determine whether there are any regional patterns that might provide insight into the effectiveness, or ineffectiveness, of various policy responses.

It is difficult to present such data. I can easily make a chart showing all 50 states (plus DC), but such a chart would be too confusing and busy, with 51 overlapping lines.

As you’ll see in the chart below — and have seen previously if you’ve read my prior posts — the US experienced a first wave between March and May, peaking in mid-to-late April; then a smaller second wave in the summer, peaking around August 1; and is now experiencing a third wave that continues to mount.

Sometimes it’s helpful to just sort the data, look at it, and see if anything jumps out at you. To do so, I picked three dates, and ranked the states by their average death rate on those dates:

Here is what I found. The reported “rate” is the seven-day average of deaths per million for the indicated state and date.

So, as I apparently have too much time on my hands, I prepared a chart grouping the states as follows:

Here is the result: 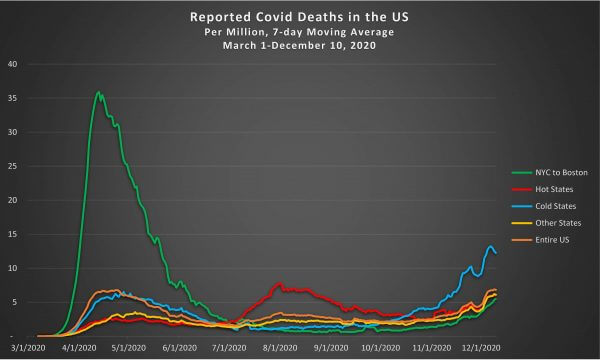 The US as a whole is in orange. You can see the three waves.

NYC to Boston is in green. You can see the huge initial spike, very low rates over the summer, and a recent modest increase in the third wave.

The Hot States are in red. You can see that the second wave in the summer is concentrated in these states.

The Cold States are in blue. You can see a modest first wave, low rates over the summer, and a very significant spike since November 1.

The rest of the states are in yellow. You can see that there is less variability in these states, with a modest increase in the third wave.

I hope that this proves helpful. It is not conclusive, but it tends to indicate that various policy differences between the states are not particularly helpful. After the first big outbreak in the major cities of the East Coast, the weather seems to be a significant factor.

It would be nice if we had a news source that presented this sort of relatively simple, dispassionate analysis. It is annoying to have to answer these questions on my own, by going to the original data.