I first started commemorating the years I’ve spent here with number six, in 2016. (If you’re younger than me in RicoYears, and you’d like a rundown of what the site looked like on that first day, you’ll find it in that post.)

I found out about Ricochet in August of 2010 on PowerLine, a site I discovered as a result of the Bush/National Guard memo story. (The typeface/font controversy interested me even more than the politics, because it spoke to my professional expertise and wheelhouse.) And I lurked here for a couple of months before the earth-shattering announcement from “Busy System Admin” that members would be allowed to start their own conversations! (Yes, Virginia, for the first six months of Ricochet’s existence, there was no member feed, and even when I joined ten years ago, on December 12, 2010, there was neither personal messaging, nor groups, nor a number of other features and bells and whistles that, to a greater or lesser extent, we all enjoy today.)

Although I was forward enough to comment on my first day here, it took me two full years to work up enough nerve before I dared to write my first post. It took me four-and-a-half more years to get to post 100. Now, a mere three-and-a-half years after that, I’m at 420. Go figure.

I don’t know what the future holds for Ricochet over the next ten years, but I hope it’s still around at the end of them. And I hope that you, my friends, are all still here. I don’t care who you voted for, I don’t care what your political persuasions are, I reserve the right to engage or disengage with you at will, and no matter how irritating or wrong-headed some of you can sometimes be (just like family), I love you all. You’ve been here with–and for–me over some of the best, and some of the worst, times of my life.

Much Love,
She X

Today, December 12, 2020, is my “tin” RicoVersary. I was thinking about that last night, as I started to put up and decorate the tree. And I remembered a post from–Good Lord!–seven Decembers ago, when I described that activity and what it means to me. There are a few more decorations and mementos, but not much has changed since then, except that our small family is even smaller. Sam is gone. And Mr. She is gone. And numerous other two and four-legged friends have either fallen by the wayside or taken themselves away. Every single one of them is missed.

But this year, by hook or by crook, COVID-19 and Governor Wolf notwithstanding, Jenny and my granddaughter and I will make it Christmas here. And although we will not violate the letter of the law, which dictates that no more than ten shall gather together indoors, we shall, in spirit, violate that order most lavishly as we remember absent friends and loved ones with a vengeance (not the right word, but I hope you get the idea). It is, as you know, spiritus est qui vivificat, and neither Governor Wolf, nor Dr. Fauci, nor any other minion of the State, will make the slightest difference to, or detract from, the Joy, or the Life, of the celebration. Bitterness has no home here, especially at this time of year.

The road to getting it right starts with getting the house properly dressed for the occasion (it’s a rustic house and looks its best when the decorations are up), and that starts with the tree. Once the lights are on, the rest is a piece of cake, a doddle, as they say in the UK, and a bittersweet walk down memory lane. I’m here by myself this year, so I invite you along with this story from Christmas past. 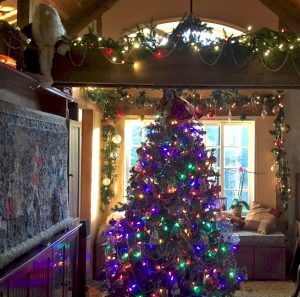 Well, the Christmas tree at Chez She is finally up. It took a bit longer than usual this year, due to one thing and another (it seems that one thing, or the other, looms larger, and is more obstructive, for each year I grow older). But anyway, it’s done.

I like decorating the Christmas tree. Well, putting on the lights is a colossal PIA, and if anyone has a secret that fixes that, please do tell (no fair telling me to use a fake tree with the lights already attached. That’s just not cricket).

But, once the lights are on, I love getting out the decorations and putting them on.

You see, our decorations have been collected over the better part of forty years (with a few from long before that), and I love to remember, as I put them on the tree.

There are the remaining glass ornaments, with the ‘hand-painted’ holly leaves on them, in a box that says they cost $4.99, that we bought for our first Christmas together, in nineteen-seventy-fump. That was the year we bought the $7 barrel-shaped Christmas tree from the sidewalk vendor in Pittsburgh’s South Side, because it was the only tree we could afford (I pass over the several years that we were reduced to stealing a tree, late Christmas Eve, from the piles dumped by the side of the road after everyone had gone home). Most of our other decorations that year were the cardboard ones we cut out, or punched out, from the Dover Books “Victorian Ornaments” edition. I still have those, too.

Then, there’s the little wooden soldier marionette that a graduate student gave to me in 1976. Claire was her name. She was from New York somewhere, and she was very bright, but a bit fragile. I guess I was one of the few people who was kind to her, during her first semester at Duquesne University, and she gave me a Christmas present. She didn’t come back in the New Year, and I don’t know what happened to her. But I remember her every time I decorate the tree.

There’s the angel that Connie, my co-worker gave me, when I was learning to be a customer support representative for a word-processing company all the way back in 1981. And the many hand-made ornaments from Marge, the most creative person in Washington Hospital’s IT department, who must have spent weeks each December making each of her forty-odd (and I do mean odd) co-workers a special little gift. And many little wooly sheep, goats, and various other farm animal ornaments from friends and co-workers over the years. 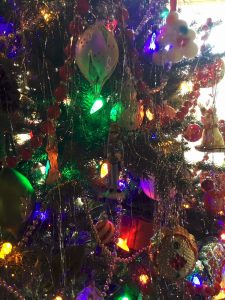 The crocheted snowflakes that Andrea gave us, that first Christmas. A bit moth-eaten by now, it’s true, but lovely still. And the bit of 1940’s tinsel from my mother-in-law (it’s probably full of lead). And the pink rosebud blown-glass ornament I bought one year just because it reminded me irresistibly of one on my grandmother’s tree, some fifty years ago.

The Christopher Radko United States Marine that my mother-in-law gave Mr. She the year before she died. The china ornament with a Boston Terrier that looked just like his dog Leon, that I gave Sam one Christmas.

And the beautiful bit of frippery, a pretty bird in a cage of ribbons and feathers, that my stepdaughter gave us, one Christmas that she was a penurious student herself. As well as the ornaments made by my stepson, Michael–those ones where you put plastic beads in a mold and melt them into shape in the oven.

Other ornaments remind me of Michael, too. His nickname was ‘Moose,’ so we have several moose (meese?) on the tree. Soft, cuddly ones. Glass ones. Wooden ones. Ones made out of some material like a flue brush. We lost Michael in 2002, but he’s here every year for Christmas, which he loved.

Still, my better self does love beautiful (expensive) handmade Christmas tree ornaments. And as the years have gone by, and as I’ve been able, I’ve bought quite a few. And I love them all.

But they don’t speak to me like the lumpy bits of plastic that don’t hang quite straight, or the finely crafted snowflakes with bits missing, or the cardboard circus animals with three remaining legs. I think it’s because like me, they’re not quite perfect, and they’re definitely showing their age. Or maybe it’s just because I cannot but remember. 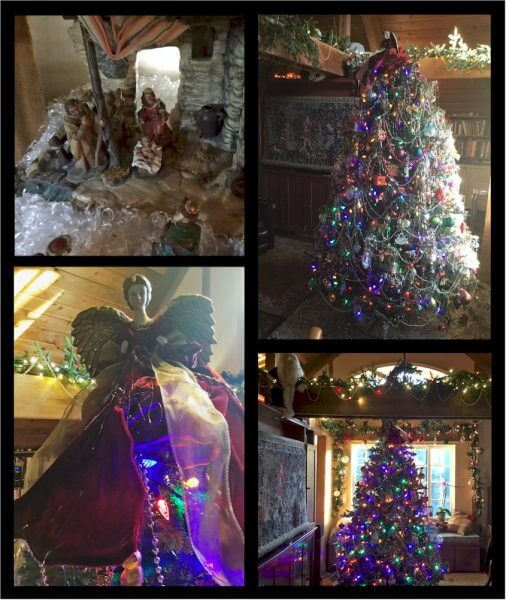