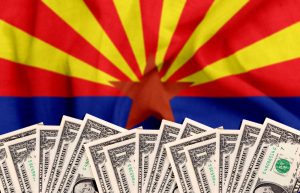 Arizona has been a welcoming environment for voter-led initiatives. If you produced enough signatures, you could get damn near anything on the ballot. The statehouse tightened up the requirements after 2006, which featured 19 propositions — some of which contradicted each other.

This year, there were only two: legalizing weed and hiking taxes on the wealthy for education. (This, after the state increased teacher pay by a whopping 20 percent.) Both measures passed but in Arizona, that just means the lawsuits begin.

First out of the gate is the Goldwater Institute, a limited-government nonprofit with a strong track record of holding tax-and-spenders’ feet to the fire. They’re taking on the education tax hikes … because they are utterly unconstitutional.

Proposition 208 would add an additional 3.5% income tax on income above $250,000 (single filing) or $500,000 (joint filing). That raises the state’s top rate to 8%. This new revenue would be “distributed,” not to the classroom, but wherever the teachers’ unions want the money to go. They’re still bitter that the Republican Gov. Doug Ducey refused to raise taxes and increased pay only for teachers instead of the bloated administrative class.

Victor Riches, President and CEO of the Goldwater Institute, notes that the measure harms middle-wage earners and small-business owners in the midst of the government-caused COVID recession.

“Prop. 208 violates the state Constitution, and it deprives the people’s elected representatives of their constitutional authority.” Riches said. “The Goldwater Institute is taking a stand to challenge the legality of Prop. 208 and to protect Arizona taxpayers against this illegal and ill-conceived measure.”

The initiative was placed on the ballot by out-of-state unions and special interest groups. Economists predict it will drive businesses out of the state, slow business growth, and create 63,000 fewer new jobs over the next decade — a loss of $1.1 billion in state and local taxes.

Taxes can only be raised with a two-thirds vote of the state legislature. A narrow majority can’t impose it with their meager 51.7%–48.3% victory on election day.

The Goldwater Institute has the facts on their side. Hopefully, the courts will destroy the education cartel’s cynical effort to line their pockets on the backs of hard-working Arizonans.