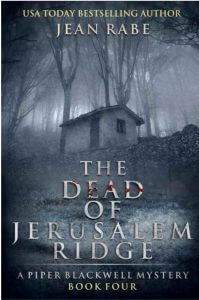 Piper Blackwell is an ex-GI. She saw service in Iraq with the 101st Airborne, seeing combat as an MP. Instead of serving her planned 20 years, she separated at the end of her hitch to look after her father, Paul Blackwell, ill with cancer. Her father, then sheriff of rural Spencer County, Indiana urged 23-year-old Piper to run for sheriff in his place. To her surprise, she won.

“The Dead of Jerusalem Ridge: A Piper Blackwell Mystery,” by Jean Rabe, is the fourth book in this mystery series. Blackwell is into her ninth month as sheriff. She has shaken up the sheriff’s department, mostly for the better. Even her election opponent, Chief Deputy Sheriff Oren Rosenberg, who would like for her to be inadequate so he could replace her, grudgingly admits her competence.

This book opens with Piper taking a three-day Labor Day weekend in Kentucky, with several ex-army buddies. They are playing paintball on land owned by one of them when tragedy strikes. They get attacked by an armed, active shooter. Several of the participants are killed, including the shooter. Others including Piper are badly injured.

Meanwhile in Spencer County, Chris Hagee, the community of Fulda’s local crank, is continuing his crusade against the Buddhist Cultural Center across the street from his house. The center is run by a Fulda native who became a Buddhist monk, who returned from Thailand after inheriting the house. It is not the only thing or person irritating Chris Hagee. He seems intent on getting everyone in the community to hate him.

When the Center is vandalized, Hagee comes under suspicion. Things spiral out of control. Before a hospitalized Piper Blackwell returns to Spencer County, a murder takes place there. The sidelined Blackwell has to let her deputies take the lead in the investigation. While that investigation is underway, Blackwell needs to discover the motivation of the Jerusalem Ridge shooter. The episode seems inexplicable, but since the shooter is dead the local Kentucky sheriffs are unwilling to probe deeper.

Rabe has assembled another successful novel in this series. Her books capture the feel of life in rural and small-town America. Although the book’s focus is on the murders to be solved, Rabe creates a fascinating ensemble of characters to support the story. “The Dead of Jerusalem Ridge” is a novel mystery readers will enjoy, leaving them looking forward to the next addition to the series.