Oh. HaHaHaHaHa!  I’ve just had the best laugh, and the best cry, I’ve had in months. There’s really no-one else to share it with right now, so, my dear friends, thanks for volunteering, and here we go.

As some of you know, Mr. She died in early July of this year, after a long struggle with many physical ailments, and a shorter, but devastating, struggle with dementia. I’ve largely been on my own since, probably even more so than I would have been in any normal year, because of COVID, travel restrictions, and lockdowns of one sort or another, both here in SW PA and in my native country of England. Nevertheless, I’ve been in contact with and visited, some friends both new and old, and I’ve even had a few folks overnighting at the farm. Thanks to all who’ve stayed in touch and who keep an eye (or even do a voice-check) on me on a regular basis. I appreciate it more than you know.

Most of the time, though, I’m by myself, and a large part of my time is spent sorting, organizing, and tidying up. I’m reminded of a couple (both now deceased) with whom we had lunch, shortly before one, and then the other, passed away. They were beginning the process of moving to an assisted-living facility, and I remember Paul remarking: “We’re throwing a lot of stuff out, and putting the rest into labeled boxes, and when we die, our children will arise up and call us blessed.” (Proverbs 31:28. Paul was a Lutheran minister.)

When I go, I want Jenny to call me blessed.

Unfortunately (as I see it now), the road to that goes through the Herculean task of doing something about Mr. She’s model train collection.

I wrote about it, asking for ideas and suggestions, on a member feed post here in late July. Many of you responded, and thanks very much, your suggestions were helpful. I’ve got a bit of a plan formulated, and expect to be getting serious early in the New Year. In the meantime, I’ve started to organize things, consolidating boxes of “like” items, and getting rid of many of the otherwise undistinguished bits and pieces from other areas of life that Mr. She must have thought might have been useful in modeling, but which he never got around to actually doing anything with (empty aspirin bottles, voluminous quantities of styrofoam peanuts, the “twisty” plastic tops from 1/2-gallon milk cartons, etc.). The gods of model railroading may strike me dead, but at least Jenny will call me blessed. So there’s that.

One of the things I’ve uncovered evidence of, as I’ve been going along, is Mr. She’s secret life as an eBay addict and purchaser of some very charming tinplate American Flyer pieces. I’m a sucker for the tinplate stuff (he bought me a lovely 1920s AF set for Christmas one year), so I’m sure all these ones I’ve just discovered must have been for me. Right? Can’t get rid of them, then.

Oh. Wait. I want Jenny to call me blessed. I think she’ll be OK with this, though. As long as I label everything clearly. Surely there’s room for a bit of negotiation.

Until I open a box and come across this: 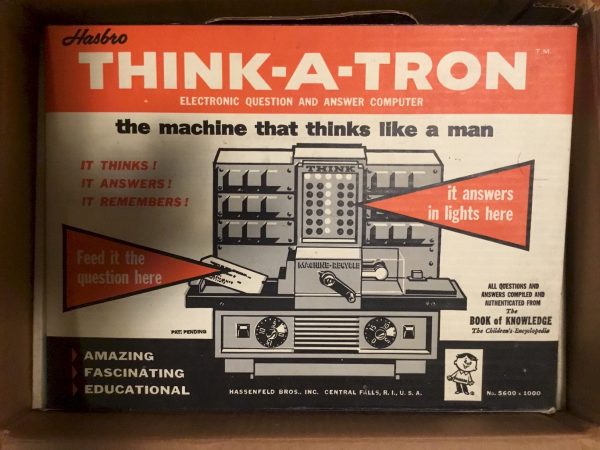 This cannot have been for me. He must have discovered this online somewhere and bought it for his beloved granddaughter and greatest fan, Miss Peachy, Science Girl (as she was dubbed by a fellow member here). How he would have delighted in the thought of her opening this on Christmas Day or on her birthday, and then in discovering with her, how it worked.

“It Thinks! It Answers! It remembers!”

Well, one out of three ain’t bad.

Suddenly, I’m transported back twenty years, to March of 2000, and the funeral of Mr. She’s first wife. I’m watching Michael eulogize his mother:

All of us wanted [Mike] to know that we were here for him.

How astonishing it was, when, at the close of that powerful and moving service, Michael got up, and, his heart broken, read us the words that he had written about his mom, his life, and how he intended to go forward wearing his new tennis shoes—the ones that his mom had bought as his Easter gift, and which he discovered, all wrapped up for him, after she died.

At that point, we heard Mike saying, “I’m OK. I’m going to make it. Don’t worry about me. Be happy.”

Suddenly, instead of our being here for him, he was here for us, and he made us all feel better.

And I cried. Great, loud, gobby, snorty tears of grief and joy. And then I felt better. And happy.

Because I’m OK. I’m going to make it through and out the other side of this sad and stupid year. And rest assured, I’m bringing all of you with me.

Much love to you all,

Homework: Please consider, and submit for discussion a question that you’d like to ask “the machine that thinks like a man.”

Extra Credit: Please let us know how you think “the machine that thinks like a man” might respond.