245 years ago, on November 10, 1775, The Continental Congress authorized the creation of two battalions of Marines. The Marines were disbanded, along with the navy, after victory in the American Revolution, and re-established on 11 July 1798. So, for a century July 11 was celebrated as the Marine Corps birthday. The earlier date was adopted as the official birthday in 1923, placing the Marines properly in the context of our fight for independence.

The brief Continental Congress journal entry for the day reflected a serious group of legislators, of a sort we sorely need in these days. The day’s business was all about military preparations at the strategic level. The marine battalions were part of that preparation, creating needed force structure long before we formally declared independence. The members of Congress understood that there was not time to train from ground zero, so required “no persons be appointed to office, or insisted into said battalions, but such as are good seamen, or so acquainted with maritime affairs as to be able to serve to advantage by sea when required.”

Green coats with white facings (lapels, cuffs, and coat lining), and a black leather high collar to protect against cutlass slashes and to keep a man’s head erect.

It is thought that the green color was selected as it was plentiful in Philadelphia, and it served to distinguish Marines from the Blue coats of the Continental Army and Navy. Also, Sam Nicholas’s hunting club wore green uniforms and hence his recommendation to the committee was for green.

On motion made, Resolved, That an order be drawn on the treasurers for 1000 dollars, in favour of Mr. R[obert] R. Livingston, Mr. [Robert Treat] Paine, and Mr. [John] Langdon, the Committee appointed to repair to the northward,

On motion made, Resolved, That the goods bought for the northern army be sent by land to Dobb’s ferry, and that the president write to the convention of New York, and desire them to have a vessel ready to take in the said goods, and transport them immediately to Albany.

Resolved, That the medicines purchased in this city for the army at Cambridge, be sent thither by land.

Resolved, That the president give written orders to Dr. [John] Morgan, to call upon Mr. [Isaac] Sears, and desire him to deliver what medicines he has under his care, or can procure, that they may be forwarded to the camp at Cambridge, for the use of the continental army.1

[Note 1: 1 Against this paragraph in the “Corrected Journals” is written the word “Secret.”]

On motion made, Resolved, That a Committee be appointed to enquire into the state of the colony of Virginia, to consider whether any, and what provisions may be necessary for its defence, and to report the same to the Congress.

That the committee consist of five.

Resolved, That all letters to and from the commander in chief in the continental army, or the chief commander in the army in the northern department, pass and be carried free of postage.

Resolved, That the commander of the New Jersey battalions be directed to march six companies of said battalions, as soon as they are completed, to garrison the fort on Hudson’s river, in the highlands, in the Colony of New York.

Resolved, That the president write to Governor Cooke, and request him to send to the Committee of Safety of New York, one ton of powder, for the defence of that City and Colony.

Resolved, That there be paid to John Wendall, the express from Albany, who has been detained several ∥twelve∥ days by order of the Congress, the sum of 1 1/3 dollars per day ∥sixteen dollars,∥ for the time he has been so detained.

Resolved, That an order be drawn on the treasurers in favor of the delegates of New Jersey, for the sum of 5000 dollars, for the use of the battalions ∥ordered to be raised in that colony.

Ordered, That the delegates of Pennsylvania do call on the gentlemen appointed to sign the continental bills, and request them with all possible expedition to compleat that business.

The Committee appointed to consider farther ways and means of promoting the manufacture of salt petre, brought in their report, which was read in these words:

It appears to your Committee, that skilful persons sent to Virginia, and employed there in a public salt petre work, under the inspection of gentlemen who will superintend it, may, with sufficient assistance, produce a considerable quantity of that article; and that a farther supply of it may be procured from the other colonies, if the assemblies, conventions, and councils of safety will appoint proper persons in their respective colonies, whose business it shall be to employ and set to work such and so many of their countrymen, as they shall judge fit, to collect earth from which nitrous salt may be extracted, and to manufacture it into salt petre.

The Congress taking into consideration the said report,

Resolved, That Richard Bland, Peter Poythress, John Bunnister, John Buffin, Archibald Cary, Benjamin Watkins, John Tabb, Richard Adams, Richard Randolph, and Theodorick Bland, the younger, Esquires, or any five or more of them, be desired and empowered to agree with the proprietors of the public warehouses, and of other places impregnated with nitre, in the counties of Prince George, Dinwiddie, Chesterfield, and Henrico; Carter Braxton, John Syme, Burwell Basset, Bartholomew Dandridge, William Aylett, George Brook, George Lyne, and George Webb, Esquires, or any five or more of them, with such proprietors in the counties of Hanover, New Kent, King William, and King and Queen; Edmund Pendleton, James Taylor, George Stubblefield, Mann Page, the younger, Joseph Jones, William Fitzhugh, of Somerset, and Fielding Lewis, Esquires, or any four or more of them, with such proprietors in the counties of Caroline, Spotsylvania, and King George; and Charles Carter, of Stafford, Thomas Ludwell Lee, Henry Lee, Thomas Blackburn, Charles Broadwater, and George Mason, Esquires, or any three or more of them, with such proprietors in the county of Stafford, Prince William, and Fairfax, in the colony of Virginia, to purchase for the use of the United Colonies, all the salt petre which may within twelve calendar months be produced from the floors and yards of the warehouses and other places, under the management of such persons as the Congress shall appoint for that purpose, and to pay to the owners of the soil, if they will manufacture it at their own expence, after the rate of two fifth parts of a dollar for every pound weight, avoirdupois, of clean, pure, and neat salt petre, delivered to the gentlemen above named, for the use of the United Colonies, and to hire labourers, and provide the necessary apparatus, to be employed under the direction of the said Managers, in the soil of such persons as shall not chuse to adventure in the business themselves, paying to the owners, if they require satisfaction, what they shall be willing to take, so that it do not exceed one forty-fifth part of a dollar for every pound weight, avoirdupois, of salt petre of the like quality, in both which cases the Congress will make good the contracts, and will pay all such expenses as shall be incurred by the gentlemen desired to superintend the operation; on whose zeal, influence, and abilities, to procure, with all convenient expedition, a large quantity of this article, so necessary for the defence of their country, and thereby render it a very important service, and by their example and activity to forward and encourage this useful work, the Congress rely with confidence.

Resolved, That it be recommended to the Assemblies, Conventions, and committees of Safety, of the thirteen United Colonies, to appoint certain persons within each of the said colonies, whose business it shall be to employ and set to work so many persons as they may think proper, both to work up such earth as is now fit for making salt petre, and to collect together and place in beds or walls under sheds, all such earth and composition of materials as are suitable to produce salt petre, after being duly exposed to the air, in order to encrease the produce of it, and that the delegates of the respective colonies be directed to send this resolve, together with the resolve of last session respecting salt petre, to their respective colonies, and cause them to be printed and made public there.

The Congress resuming the consideration of the report of the Committee on Nova Scotia,1

Resolved, That two persons be sent at the expence of these colonies to Nova Scotia to enquire into the state of that colony, the disposition of the inhabitants towards the American cause and the condition of the fortifications, Docks, yards, the quantity of artillery and warlike stores and the number of soldiers, sailors and ships of war there and transmit the earliest intelligence to General Washington.1

Resolved, That General Washington be directed in case he should judge it practicable and expedient to send into that colony a sufficient force to take away the cannon and warlike stores and to destroy the docks, yards and magazines, and to take or destroy any ships of war and transports there belonging to the enemy.1

Resolved, That two Battalions of marines be raised, consisting of one Colonel, two Lieutenant Colonels, two Majors, and other officers as usual in other regiments; and that they consist of an equal number of privates with other battalions; that particular care be taken, that no persons be appointed to office, or insisted into said battalions, but such as are good seamen, or so acquainted with maritime affairs as to be able to serve to advantage by sea when required: that they be insisted and commissioned to serve for and during the present war between Great Britain and the colonies, unless dismissed by order of Congress: that they be distinguished by the names of the first and second battalions of American Marines, and that they be considered as part of the number which the continental Army before Boston is ordered to consist of.1

Ordered, That a copy of the above be transmitted to the General.

Resolved, That to Morrow be assigned for taking into consideration the Report of the Committee on the disputes between the people of Connecticut and Pensylvania on the waters of Susquehannah.

The order of the day renewed,

Adjourned to ten o’Clock to Morrow.

[Note 1: 1 Against these paragraphs in the “Corrected Journals” is written the word “Secret.”] 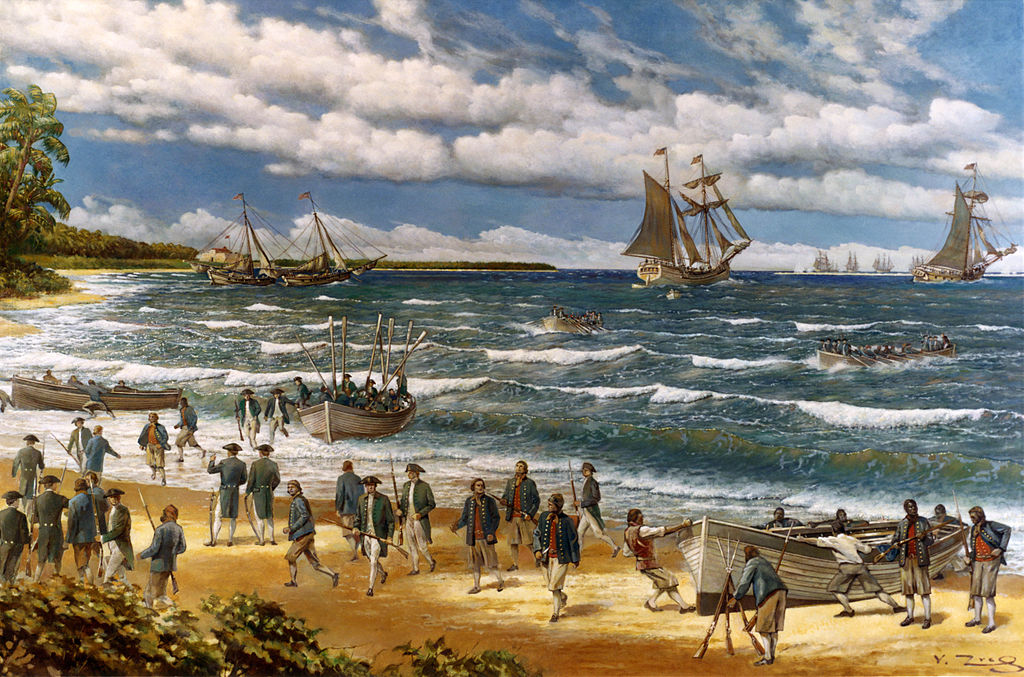