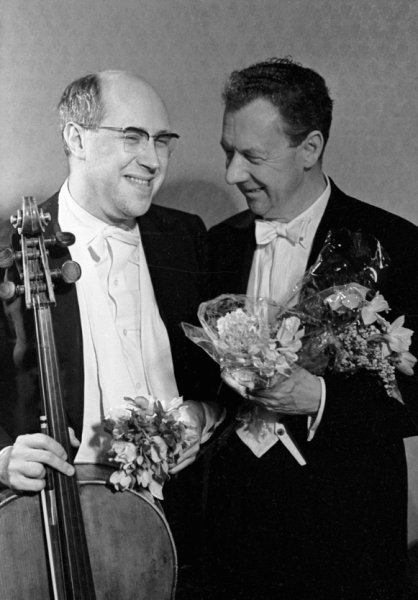 Benjamin Britten was born in 1913 in the Suffolk fishing port of Lowestoft, the son of a dentist. He attended a series of minor public schools before winning admission to the Royal College of Music in London in 1930. By 1932, he had already received widespread attention, and acclaim, for his compositions at the College. Through the 30s and 40s he was a prolific composer for cinema, radio, and theatre, as well as producing orchestral music and song cycles. It was also in 1937 that he would meet Peter Pears, a tenor who became his personal and professional partner for the next nearly forty years. In the 50s, he lavished greater attention on operas, and also began considering how to communicate his love and appreciation for classical music to the rising generation. It was through one of these ventures that he would meet Rostropovich.

Mstislav Rostropovich was born in Soviet Azerbaijan to Polish-Russian parents, both with extraordinary musical pedigrees, and he first learned to play piano with his mother at the age of four, and cello with his father at ten. The family moved to Moscow from Baku during WWII, and he entered the Moscow Conservatory, with great success, in 1943. By the time he graduated in 1948, he had become close to the legendary Shostakovitch and won a gold medal in the USSR’s first union-wide competition for young musicians. Rostropovich, and his opera singer wife Galina Vishnevskaya, were often sent abroad to tour in the 50s and 60s, though the occasions became rarer as time went on because of  Rostropovich’s politics. (He was an ardent advocate of democracy and free expression, going so far as to shelter Aleksandr Solzhenitsyn in his home in 1970 when the author has nowhere else to go).

The pair met for the first time in September of 1960, at a Royal Festival Hall concert. It was a combined performance of Britten’s 1945 composition The Young Person’s Guide to the Orchestra and Shostakovich’s First Cello Concerto, receiving its British debut with Rostropovich’s performance. Britten and Shostakovitch shared an audience box, and he later confided to his pupil:

“Slava, do you know I am aching from so many bruises along my side.”

“What happened, Dmitri Dmitriyevich, did you fall down?”

“No, but at the concert tonight, every time Britten admired something in your playing, he would poke me in the ribs, and say, ‘Isn’t that simply marvelous!’ As he liked so many things throughout the concerto, I am now suffering!”

Slava was touched by the compliment, delivered in hasty Russian before the two were introduced. He was then determined, as he was on many earlier occasions with other composers, to get a piece for himself out of Britten. To his surprise, pleading with the initially reluctant Englishman, who had never before even written anything for the cello, worked. (The whole thing was nearly a disaster; Rostropovich, as I mentioned above, thought Britten was long dead, and that his mentor’s offer to introduce them was a joke. He only just stopped himself from laughing when he turned to shake the man’s hand, and Britten, shy and sensitive as he was, would likely have refused to do anything for the Soviet if he thought he was being mocked).

A year later, Cello Sonata, Op. 65 was born. It was to be the first of five major pieces that Britten created for his Soviet friend throughout his life. At the first London run through, both were extraordinarily nervous, and required “four or five large whiskies”, according to Rostropovich. “We played like pigs, but we were so happy.” But the festival performance at Aldeburgh was a rousing success.

For the rest of Britten’s life, the two remained the best of friends. They shared an absurdist sense of humor, and a love of food, cars, and the world of music. Benjik worried constantly over Slava’s safety as Soviet repression efforts against him ratched up over the 1970s, and was incandescently happy when he chose to enter exile in the United States in 1974. To Rostropovich’s lasting sadness, his special friend died of congestive heart failure only two years later, in December of 1976. A few days before his death, during their last visit together, Britten gifted Rostropovich his uncompleted composition for Edith Sitwell’s poem Praise We Great Men. 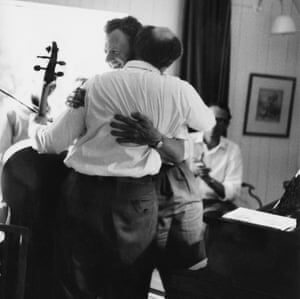 While Slava did forge ahead in the wake of Britten’s death, and continued to have a successful international career, he never for a moment forgot his unlikely pal. He refused almost altogether to play Schubert’s Arpeggione Sonata, feeling that, after Britten had left, there was no one left who could make it feel to him the way it once did; two instruments, two souls, twined into one. On his deathbed in 2007, Slava assured his family that he felt no fear, totally sure that he was on a final journey to be reunited with Benjik, forever.

In a time of such conflict and ugliness, it’s only right and good that we should pause to appreciate, and be thankful for, the beauty of friendship. And the everlasting beauty that this friendship created for us all to enjoy.