Just fifty-some odd hours before the last of the polls close and the voting …well, not even that is clear in these trying times…we have two very different realities at play for people’s attention. Both are current on my news scanning tabs this afternoon.

The first, from that new competitor for the braindead MSNBC audience: 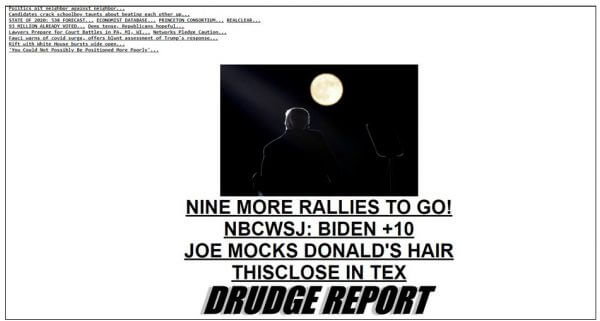 The second via Instapundit:

HMM: Poll: Donald Trump set to win US presidency by electoral college landslide. “Donald Trump is on course to win four more years in the White House with a one point lead in the popular win, the final Democracy Institute poll for the Sunday Express has found. . . . Significantly, the President has, according to the latest findings, maintained a four point lead of 49 percent to 45 percent in the key swing states including Florida, Iowa, Michigan, Minnesota, Pennsylvania and Wisconsin. It means he is on course to easily win the electoral college by 326 to 212 votes against his Democrat rival in a result which would shock the world even more than his astonishing defeat of Hilary Clinton in 2016. The Democracy Institute/Sunday Express poll has throughout the campaign been one of the few to predict a Trump victory since March. This is because unlike other polls it only looks at people identifying as likely voters instead of just registered to vote and it has tried to identify the shy Trump vote.”

To be fair, the first is consistent with all the headlines beamed to us for months now. The prediction in the second is consistent with every other indication the rational and discerning consumer of American politics would have sensed over the same time period. However, if true, the highlighted text is likely a surprise to everyone…again, if true, such data has been blacked out from everything I have seen to-date. (“Maintained” seems a very odd choice of words.)

The next two days are going to be rather interesting to say the least…and somebody’s reality is going to be shattered.