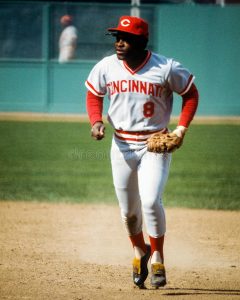 This year has been a terrible year in many ways for just about everybody. It’s been no exception for baseball fans. This year had so far seen the loss of five Hall of Famers; Al Kaline, Lou Brock, Bob Gibson, Tom Seaver, and Whitey Ford. This Sunday, a sixth has been added to that list, Joe Morgan. Morgan passed away at his California home on Sunday at the age of 77 due to non-specified polyneuropathy.

Joe Leonard Morgan was born on September 19, 1943, in Bonham, TX, the youngest of six children. He moved to Oakland, CA with his family at five when his father found work with the Pacific Tire & Rubber Company. As a boy, Joe played baseball, basketball and ran track. His best sport was baseball, but he was not considered a major league prospect in high school because of his lack of size (he is listed at 5′-7″, 160 lbs during his playing career) and he was, at best, the second-best player on his team behind Rudy May who was highly sought after in high school and would have a fine major league career as a pitcher. He played baseball at a local junior college where he did attract the attention of the scouts and he signed a contract with the Houston Astros for all of $500 per month plus a $3,000 signing bonus. He worked his way through the expansion Astros minor league system rapidly, getting cups of coffee in the bigs in 1963 and 64 becoming the Astros starting second baseman in 1965 at age 21.

With the Astros, “Little Joe” quickly blossomed into a fine player. He finished second in the Rookie of the Year voting in 1965 and made two All-Star teams while in Houston. However, the combination of the dismal performance of the team (they were always in the second division) and playing his home games in an awful hitter’s park (The Astrodome) helped to hide his light behind a bushel. A blockbuster trade between the Cincinnati Reds and the Astros in the winter of 1971 would change that. The Astros sent Morgan, Cesar Geronimo, Denis Menke, Jack Billingham, and Ed Armbrister to the Reds in exchange for slugging 1B Lee May, fellow 2B Tommy Helms, and Jimmy Stewart. Morgan was initially upset with the trade. He’d made a home in Houston, and he and his wife were expecting their second child. However, the trade would kick his career into overdrive. Over the next six seasons, he was probably the best player in baseball. And, playing for manager Sparky Anderson and teaming with all-time greats Johnny Bench and Pete Rose in one of the best eight-man lineups in history, the Reds would average 98 wins per season and win back-to-back World Championships in 1975-76.

Morgan would leave Cincinnati after the 1979 season, but he would continue to find his way onto winning teams. Returning to Houston, he helped them into the postseason in 1980, later helped the 1983 “Wheeze Kids” Phillies into the World Series and dealt the Dodgers a death blow with a Game 162 winning home run for the Giants in 1982. The only negative mark on his playing career is a rather poor batting line in the postseason (.182/.323/.348 in 50 games, 222 PA) although he also got the game-winning and Series-winning single in the ninth inning of the seventh game to top the Red Sox in 1975.

Morgan retired after the 1984 season with 2,517 hits, 1,650 runs scored, and at the time record for a 2B 268 homers and 689 stolen bases. Here is a link to his page at Baseball Reference. His playing career was capped by his election to the Hall of Fame in 1990 in his first year of eligibility.

After his playing career, he did not pursue a managerial career as many imagined he would (he was highly regarded throughout his playing career for his heads up play and knowledge of the game). Instead, he pursued interests in business and broadcasting. He owned several Wendy’s franchises and a Coors Beer Distributorship. He broadcast games over the years for ABC, NBC, and ESPN, and he worked as a “special advisor for baseball operations” for the Reds and had been the vice-Chairman of the Board of Directors of the Baseball Hall of Fame for twenty years at the time of his death.

Morgan was married twice, first to his high school sweetheart, Gloria, for twenty years and to his second wife Theresa for thirty years at the time of his passing. He is survived by his four daughters (two from each union).

I was a big fan of Morgan’s throughout his playing career and three distinct bits of his playing style still remain vivid to me. First, he must have used the smallest glove of any player in the modern era. It looked like a little leaguer’s glove. Morgan explained that the small glove allowed him to get the ball out his glove quickly and helped him turn double plays. Second, his “arm flap”. Waiting for the pitch at the plate, Morgan would flap his arm down to his side and back up several times before each pitch. He did this to remind himself to keep his left arm horizontal before the pitch. Finally, Morgan was an outstanding base-stealer (689 steals at an 81% success rate) and so pitchers would regularly pitch-out against him hoping to catch him attempting to steal. The thing is, he never bit on a pitch-out. He always seemed to know when a pitch-out was coming and when he did he’d just stand where he was off first base with his hands on his hips as there wasn’t going to be any play.

Below is a brief video celebrating Morgan’s playing career put together by the Baseball Hall of Fame.