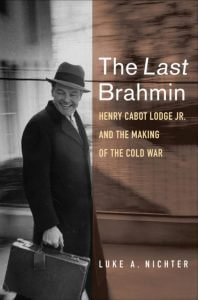 Henry Cabot Lodge, Jr. was the grandson of Senator Henry Cabot Lodge, Sr. His namesake was a confidant of President Theodore Roosevelt, and the bête noire of Roosevelt successor Woodrow Wilson. His grandson became at least as prominent a Republican politician during the mid-twentieth century.

“The Last Brahmin: Henry Cabot Lodge, Jr. and the Making of the Cold War,” by Luke A. Nichter, is a fresh biography of Lodge’s life.

Nichter examines every aspect of Lodge’s life, from his youth through Lodge’s retirement. In between Lodge served many roles: as newspaperman, elected politician, soldier, a political kingmaker, permanent representative to the United Nations for the United States, ambassador, and the President’s envoy to the Vatican.

Lodge joined an isolationist and regional Republican Party. He helped transform it into a national party that could compete with the Democrats. He successfully recruited Dwight Eisenhower to run as a Republican in 1952, ending the Democrats’ five-term Presidential reign.

He got Republicans to abandon isolationism. He shaped US participation in the United Nations and NATO. Both were critical institutions in checking Soviet expansion in the late 1940s and 1950s. Lodge served as ambassador to Vietnam in the early 1960s.

Nichter provides an in-depth, well-researched look at Lodge and his accomplishments. It reveals Lodge as a complex and principled individual. Nichter shows Lodge as a skilled retail politician. Lodge won the election in Massachusetts and landed Eisenhower’s nomination through attention painstaking to detail. He was a longtime advocate of civil rights in a period of legal segregation.

Lodge put service to country ahead of everything. He resigned his Senate seat in World War II to serve in the Army, the only elected Congressman to do so. He reluctantly agreed to serve both men who defeated him in the 1960 Presidential election as ambassador to Vietnam because Lodge was the best man for the job. (Lodge was Nixon’s running mate.)

“The Last Brahmin” holds lessons for today’s politics. Lodge’s example of service to country and his desire for color-blind equality and emphasis on principled bipartisanship remains relevant today. (Bipartisanship based on true principle, rather than on expediency or total capitulation).

The book also illustrates how the virtues of one generation become the next generation’s vices. Lodge’s internationalism was a necessary antidote for the isolationism of the 1920s and 1930s. Yet in the 1960s, over-aggressive internationalism, which Lodge supported, but did not champion, led to reverses in Vietnam.