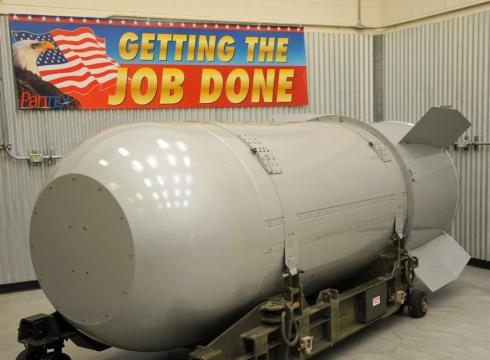 In the news today, I see reports that American technicians yesterday dismantled the B53, the most powerful nuclear weapon ever built.&nbsp;

The B53 nuclear bomb was made to deliver a 9-megaton blast about 600 times more powerful than the one that destroyed Hiroshima in 1945.

“Obviously, this was one of the largest weapons we had. It was a big one,” says Greg Cunningham of the U.S. National Nuclear Security Administration’s Pantex Plant near Amarillo, Texas. At the plant, a ceremony marked the removal of high explosives from the last of the final 50 B53 bombs held in a reserve after the weapon’s 1997 retirement.

When I read the caption accompanying the photo, I was surprised to see that the photo is not of the Bomb itself–that’s an “inert non-nuclear training weapon.”&nbsp;It’s as if the very image of the real thing would make viewers’ eyeballs melt.

I was dismayed that it seemed to be considered quite normal to pass about the footage of Qaddafi’s lynching on the Internet. But I suppose I’m relieved to see that we still have a few important taboos. I think that’s what this is, anyway.&nbsp;