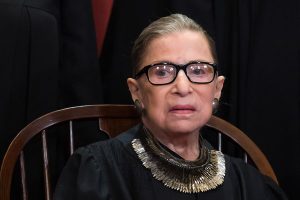 I first met Ruth Bader Ginsburg in the winter of 1978 when we were both fellows at the Center for Advanced Studies in the Behavioral Sciences at Stanford. Our interactions were always cordial. From the first time we talked, it was clear that she was a passionate advocate first, and a detached academic second. She was always immersed in filing certiorari petitions at the Supreme Court in connection with the hugely successful Women’s Rights Project, which she ran at the American Civil Liberties Union from 1972 until she was appointed to the Court of Appeals for the District of Columbia in 1980.

Ginsburg had the rare quality of being both passionate and rigorous in her work, and she displayed those same traits of grit and excellence at every stage of her career. Moreover, her excellence as a lawyer was not confined to the women’s rights issues that brought her fame. She also displayed an impressive expertise on the many procedural, jurisdictional, and constitutional issues that form a huge part of the high court’s docket. It was surely possible to disagree with her on the merits of any given case, as I often did. But it was not possible to dispute the brilliance, knowledge, and determination that she brought to her lifetime’s work.

Ginsburg was nominated and confirmed to the United States Supreme Court in 1993 by a 96-3 vote, in a relative period of peace between the huge confirmation battles of Judge Robert Bork and Justice Clarence Thomas, and those of Justice Neil Gorsuch and Justice Brett Kavanaugh. The most bitter fights have been over Republican nominees, a pattern that promises to continue with the next nominee, whom President Trump has stated, surely incorrectly, that he has “an obligation” (as opposed to an option) to nominate. He has already announced it will be “a very brilliant woman.” The thought that the immediate struggle would be put off until after the election was dismissed by Senate Majority Leader Mitch McConnell’s immediate announcement that he will try to persuade the Senate to confirm a nominee.

The obvious Democratic rejoinder is that McConnell himself held up the nomination of Judge Merrick Garland on the stated ground that the people should have a chance to speak in the presidential election before his nomination proceeded. That position, made when Barack Obama was president, was a fig leaf for a far more partisan calculation. McConnell thought that if Hilary Clinton were elected to the presidency, she would either renominate Garland or appoint some other nominee who, from his point of view, would be just as undesirable, but probably not that much worse. Obama had acted wisely in choosing Garland because he was an older judge from the more conservative side of the Democratic Party, someone who furthermore had impeccable credentials for the Supreme Court. But Obama’s calculated gamble failed because of the partisan wall Garland faced in the confirmation process. The only issues that matter at confirmation hearings seem to be abortion and reproductive rights; corporate speech and campaign finances; matters of race, gender, and sexual orientation; and issues relating to voting rights. On all of these critical topics, Garland would likely have sided with his Democratic brethren, clearly motivating McConnell to fight hard to retain that crucial fifth vote.

However, that strategy never quite panned out in practice, as defections from the conservative five are more frequent than those from the liberal four: think of Chief Justice Roberts’s critical vote to first sustain the Affordable Care Act in 2012 in NFIB v. Sebelius, and then his 2015 opinion in King v. Burwell, allowing enrollees in federal plans under the ACA to receive tax deductions; of Justice Anthony Kennedy’s 2015 decision in Obergefell v. Hodges, giving constitutional protection for same-sex marriage; and Justice Gorsuch’s 2020 opinion (joined by the chief justice) in Bostock v. Clayton County holding that Title VII of the 1964 Civil Rights Act protects both gay and transgender employees.

Nonetheless, Democrats still fume that McConnell stole their seat: but “stole” belongs in quotation marks. McConnell’s refusal to give Garland a hearing or vote lay within the sole discretion of the Senate. The manifest snub, given its preordained outcome, was a blessing in disguise that spared the nation the huge and ugly struggle that would mar the Kavanaugh confirmation hearings. But strategically, 2020 is not a rerun of 2016, as the Republicans control both the presidency and the Senate, and therefore do not want a presidential election to upset their appointment prospects.

What happens next is anyone’s guess. Trump is likely to pick a nominee who will not alienate swing Republican senators like Susan Collins and Lisa Murkowski, who both have already announced that they want to postpone the vote so that it can be made by the person who wins the 2020 election. On balance, I think that they are correct, and the issue might become moot if other senators speak up, perhaps forcing Trump and McConnell to back down on an immediate vote. Nor is this necessarily a disaster for the Republicans, for as the conservative Richard Viguerie has urged, making this an election issue forces Biden to publish his own list of nominees, and gives legitimacy to any nominee Trump selects if he is victorious. As of this writing, both Trump and McConnell are all in. Both recognize that if they are to have any chance, Trump will have to nominate a moderate, not a hard-line, conservative woman.

If the nomination process plays through, I suspect it will galvanize Trump’s outraged opponents more than his supporters. If Trump’s nominee is confirmed and Trump wins the election, the unhappy standoff between the two parties is likely to continue with little institutional change. Of course, much depends on which woman occupies the seat. But no one can make any prediction as to what will happen if Trump’s nominee is confirmed, followed by Biden claiming the presidency and Democrats claiming the Senate.

Senate Minority Leader Charles Schumer says that if the Democrats gain control of the Senate, “nothing is off the table.” In the New Yorker, Jeffrey Toobin gives content to that threat when he offers potential Democratic reforms, such as changing the rules on the filibuster and even adding new places to the lower federal court. More dramatically, the Democrats could plump for statehood for the District of Columbia (an issue that raises thorny constitutional issues) and Puerto Rico, to create a heavy tilt toward Democrats on an enormous range of political and electoral issues. Still others have proposed limiting the jurisdiction of the Supreme Court to help insulate progressive proposals, including those on the Green New Deal, from judicial invalidation.

But more to the point, the Democrats could seek to alter the number of seats on the Supreme Court. The Constitution speaks of one Supreme Court, but the number of judges has always been set by statute. Any effort to add seats would dramatically change the institutional dynamics of the court in ways that are hard to predict, but an unwieldy body could find it more difficult to hear and decide cases in a prompt and expeditious fashion. And the Republicans could try the same maneuver should they regain power when the majority of Democratic justices remain on the bench. The previous effort at court-packing by Franklin D. Roosevelt brought forth similar anxieties that were quickly put to rest by a turnover in court membership. But this change is likely to prove more permanent.

In general, it is highly risky to challenge sub-constitutional norms that have been embedded in the structure of government. The federal government is a complex lattice, and no one can predict what effects changing the structure of the Supreme Court will have. All this does not mean that we should not think more systematically about the structure of the Supreme Court, but only that such debates should happen outside the context of any particular nomination fight. For example, it would be wise for Congress to consider establishing term limits for the justices at some point after the presidential election—a process that would require a constitutional amendment. A term of eighteen years seems far preferable to a lifetime appointment, if only because it reduces the stakes in any given confirmation fight and secures rotation in office.

The risk for Trump is that if he pushes ahead, he will usher in a set of constitutional convulsions that will be difficult to undo. He already has five conservative votes. He should gracefully back off, and let the political process take its course.