“Of all losses, time is the most irrecuperable for it can never be redeemed.”–King Henry VIII

I have no idea if Henry VIII ever actually uttered those words. They’re included as a quote from Henry to Charles Brandon, Duke of Suffolk, in an episode of the TV series The Tudors, and that’s close enough for gubmint work right now. Because it’s certainly true, isn’t it? I mean, which of us hasn’t, at some point in our lives, spent an inordinate amount of time on something; a job, a project, a relationship, a hobby, something, anything and somewhere along the way recognized what an utter bloody waste of time it is and has been? And then (at least if you’re me), who hasn’t spent even more time regretting, second-guessing, and trying to put things right before giving ourselves a metaphorical slap upside the head and moving on?

None of you? Well, alrighty then. You’re better men than I am, Gunga Din! (that’s not the Quote of the Day, either. Please try to keep up.)

The reason I’m thinking about Henry VIII today is that it’s the 536th birthday of Arthur, Prince of Wales. Born on September 20, 1484 to Henry VII and his bride Elizabeth of York, Arthur had every expectation of inheriting the throne upon the death of his father.

But (please observe that nothing comes before “but”), on April 2, 1502, and only a year after his arranged marriage, at the age of 15, to Catherine of Aragon (yes, that Catherine. And that Aragon), Arthur died at Ludlow Castle in Shropshire, of an “unknown ailment,” thus ensuring that the throne of England would pass, upon his father’s death, to Henry VII’s second son, the future King Henry VIII.

Hard to imagine an untimely death of a teenager that had more of an impact on world history, and upon which it’s more fun to speculate upon the “what if’s.”

Arthur, Prince of Wales has always been a bit special to me because he’s buried in Worcester, in my hometown cathedral, where his chantry is a beautiful place to visit, and a prime attraction for visitors.

I love Worcester Cathedral. It’s large enough, and old enough, to enjoy all the wonderful accoutrements of tradition and history that I require in such special places, yet small enough to encompass and get my head around when I’m trying to understand the whole. I highly recommend it as a stop on a tour of England (if we’re ever allowed to enjoy such things again) for all those who love, as I do, visiting ancient churches and places of worship.

One of the side benefits of Arthur’s burial there is that Henry VIII largely spared Worcester from the worst effects of the dissolution of the monasteries and the ravaging of the churches. So it is a largely intact example of a pre-Henry VIII English monastery and cathedral.

Another huge attraction there is the tomb of King John. Poor old King John.

John, John, bad King John
Shamed the throne that he sat on;
Not a scruple, not a straw,
Cared this monarch for the law;
Promises he daily broke;
None could trust a word he spoke;
So the Barons brought a Deed;
Down to rushy Runnymede,
Magna Carta was it hight,
Charter of the People’s Right,
Framed and fashioned to correct
Kings who act with disrespect –
And with stern and solemn air,
Pointing to the parchment there,
“Sign! Sign! Sign!” they said
“Sign, King John, or resign instead!” —Eleanor Farjeon

Once more, not the QOTD. But a bit of doggerel I learned as a child that stuck with me, through thick and thin, through actual history lessons, and through historical/romantic novels covering the period.

So, when I’m in the English Midlands (please God that I will be again, one day, and that if and when I am, I will be able to make it home to Western PA afterward), I make it a point to visit Worcester Cathedral to see King John and say hello to Prince Arthur.

Here’s Dad, the last time I took him to say hello to King John: 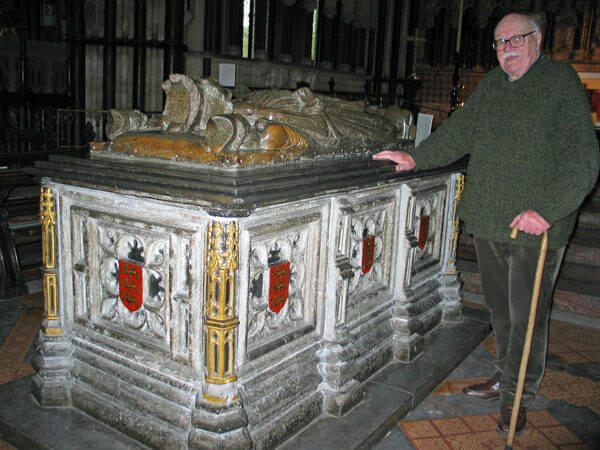 Hello, Dad. Sixty-six years ago today I said those words (in my infant mind) to you for the first time. And that, and all the time I spend with you over the ensuing 53 years, is time I never regretted a moment of, and of which I never considered a moment “wasted.” Thanks for the memories. Love you much and miss you every day.