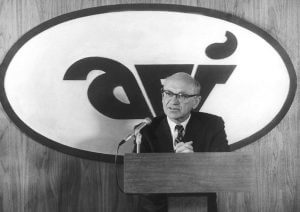 A currently unfashionable notion: A corporation should be run primarily for the benefit of its shareholder owners by maximizing its value. The most provocative distillation of the idea is Nobel laureate economist Milton Friedman’s famous 1970 essay in the Sunday magazine of The New York Times, “A Friedman doctrine– The Social Responsibility Of Business Is to Increase Its Profits.” The most-repeated bit in that piece is actually Friedman quoting an attack on “social responsibility” from his own book, Capitalism and Freedom: “… there is one and only one social responsibility of business—to use its resources and engage in activities designed to increase its profits so long as it stays within the rules of the game, which is to say, engages in open and free competition without deception or fraud.”

For a great analysis of why Friedman’s emphasis on what came to be called “shareholder primacy” remains a valuable analytical and conceptual lens, please check the new AEI essay “For whom should corporations be run?” by Sanjai Bhagat, a finance professor at the University of Colorado, and Glenn Hubbard, an AEI visiting scholar and economics professor at Columbia Business School. Also of interest is a big reason why the Friedman Doctrine is currently under fire as never before. Some critics view the immediate postwar decades as an economic Golden Age that never turned into a Golden Century (or at least half-century). And that failure, they say, is partly because of the rise of a short-sighted, rapacious capitalism that Friedman supposedly recommended. This new cold-blooded, cutthroat capitalism eventually ended the cozier-yet-wildly-successful capitalism variant of the 1950s and 1960s that had created a fast-growth, high-productivity, low-inequality economy built on a cooperative and stable relationship between Big Business management and labor.

But the Golden Age was not as golden as we remember, though this might surprise populists of the left and right. The productivity boom that helped drive fast economic growth and fast-rising living standards was built on key innovations from earlier decades. The postwar decades seem to have exploited and emptied this reservoir without adding to it. Indeed, what Robert Gordon in The Rise and Fall of American Growth: The U.S. Standard of Living since the Civil War called a “special century” of fast productivity growth ended in the 1970s. In A Great Leap Forward: 1930s Depression and U.S. Economic Growth, economist Alexander Field calls the quarter-century after World War II one of “moderate innovative advance.” The era’s stability was its undoing. Field:

Many corporations offered something equivalent to lifetime employment security. Through marketing and planned obsolescence, the disruptive force of technological change—what Joseph Schumpeter called creative destruction—had largely been domesticated, at least for a time. Whereas large corporations had funded research leading to a number of important innovations during the 1930s, many critics now argued that these behemoths had become obstacles to transformative innovation, too concerned about the prospect of devaluing rent-yielding income streams from existing technologies. Disruptions to the rank order of the largest U.S. industrial corporations during this quarter century were remarkably few.

Of course, companies could get away with all that because of a lack of competition, particularly from global competitors recovering from World War II. But other rich nations were not going to stay down forever. As Alan Greenspan and Adrian Wooldridge write in Capitalism in America:

The 1970s was the decade when America finally had to grapple with the fact that it was losing its leadership in an ever-widening range of industries. Though the best American companies such as General Electric and Pfizer powered ahead, a striking number treaded water: they had succeeded during the long postwar boom not because they had any particular merits, but because Europe and Japan were still recovering from the devastation of the Second World War, and they collapsed at the first sniff of competition.

All this is necessary context to understanding the Friedman Doctrine. Bhagat and Hubbard:

Departing from the owner-managed enterprises of earlier times, capitalism in the twentieth century featured managers as leaders of large corporations with many diverse shareholders. Managers run the corporation on behalf of shareholders represented by a board of directors. Without proper monitoring and rules of the road, managers may pursue other objectives than the long-term value of the enterprise for its owners — shareholders. Such concerns rose prominence among both economists and business leaders in the 1960s and 1970s.