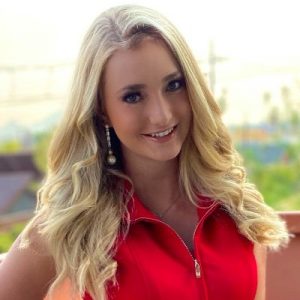 What happens when the mob demands you be canceled, and you simply say “no?” Rae’Lee Klein, a junior at Arizona State University, is finding out.

Klein, 21, is serving her second year as station manager of student-run Blaze Radio. The Wyoming native hosts coverage of the school’s hockey team, reports for ASU’s Cronkite News, and co-hosts a political podcast. She might be studying journalism but she made one critical error: she actually shared news. 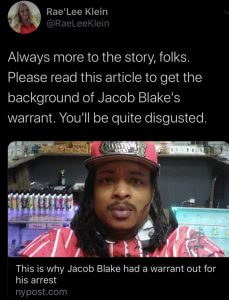 The legacy media has studiously avoided mentioning Jacob Blake’s list of alleged crimes. It’s much easier to pretend “Blake good, cops evil” than include the many shades of gray in the Kenosha story.

The outrage was swift over Klein’s Commission of Journalism with the Intent to Inform. Wanting to make peace, Klein took to Twitter.

I would like to clear the air about my previous tweet. It was not my intent to make an excuse for what happened to Jacob Blake. The incident is tragic in every sense of the word. The point of my tweet was to provide an additional perspective.

I apologize to anyone who I may have offended.

While my profile is separate from Blaze Radio, I know that I am affiliated with the station because I am the Station Manager. My tweet was in no way associated with Blaze, the Cronkite School, or ASU.

I’m grateful for the conversations I’ve been able to have with people who have offered differing opinions. I, as a student journalist, did not take into account the harm this may have further caused and I am committed to minimizing harm as I try to seek truth. Again, I apologize.

My DMs are open if you’d like to have an open conversation. The original tweet has been deleted to minimize harm.

It’s hard to find any potential for harm in Klein’s original tweet but with her deletion and apology, looks like all was well in Blazeville. Not so much.

The Blaze Radio Board of Directors, made up of Klein’s fellow students, demanded her resignation. Not wanting to be left out of a seething mob, several other student-led campus groups called for Klein’s job.

The Blaze Radio board of directors voted unanimously this weekend to remove Rae’Lee Klein as station manager. We reached this conclusion after a series of extensive discussions with one another and our Blaze Radio members.

The board gave Klein an opportunity to step down under her own will. As of the time of this statement, Klein has not made the decision to resign. In light of this, the board wants to make it clear that we do not recognize Rae’Lee Klein as the station manager of Blaze Radio.

That ought to do it. The cancel culture script clearly states that the Object of Hate will quickly denounce herself, retire from public life, and wander the deserts wearing a warning bell and shouting “Unclean! Unclean!”

But Klein didn’t follow the script. She simply ignored the mob and refused to resign. And now the mob is very, very confused.

Since the Blaze board is just a bunch of students, they have no authority to fire their station manager. So they released another Official Statement:

We believe that as long as Klein holds her post, students of color will not feel welcome in Blaze Radio. Because of this, we believe she no longer represents the key principles of diversity and inclusion within the organization and is not longer fit to lead Blaze Radio, which has meant so much to many. Due to Blaze directors’ status as employees of the Walter Cronkite School of Journalism and Mass Communication, we call on Interim Dean Kristin Gilger to honor the Board’s vote and remove Klein from a leadership role.

(Can I mention that the board’s statements are riddled with grammatical errors? I can’t? Okay, I won’t.)

I will mention that if Klein is ousted, students of varying views will not feel welcome “in” Blaze Radio. The Walter Cronkite School of Journalism and Mass Communication, of which I am an alum, will no longer represent the key principles of diversity and inclusion.

You can neither shun your way to diversity nor fire your way to inclusion. Acceptance and tolerance are two-way streets and the First Amendment applies to everyone.

For some reason, the second cancel attempt has proven as unsuccessful as the first. Klein remains the station manager and continues to work on her degree. In fact, her cause has been taken up by local talk radio, a handful of national blogs, and even a left-leaning opinion editor at the state’s largest daily newspaper.

Turns out it’s tough to cancel someone when they refuse to be canceled.

If you find their statement incredibly shocking, you can write an article disagreeing with them. This is called “free speech” and is foundational to journalism. It’s time to swallow your pride, confess your intolerance, and apologize to Ms. Klein for your self-defeating actions.

And if the Cronkite School is going to keep sending me fundraising letters, its faculty better back Blaze Radio’s station manager 100 percent.