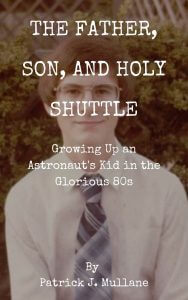 “The Father, Son, and Holy Shuttle: Growing Up an Astronaut’s Kid in the Glorious 1980s,” by Patrick Mullane, tells that story.

Patrick Mullane was ten when his father, Michael Mullane was selected as an astronaut. Patrick’s family settled Houston’s Brook Forest/Middlebrook subdivision. It proved his first permanent home. Before that, military brat Patrick and his family moved virtually every year as his father went from post to post.

Mike Mullane was one of 1978’s “Thirty-Five New Guys” astronaut class, filling out the astronaut corps as the Shuttle era dawned. (Patrick explains the earthier term used by the astronaut corps for the acronym TFNG). Patrick remained part of the Shuttle scene until going to college in fall 1986. He saw the program from its operational start through the aftermath of the January 1986 Challenger disaster.

Patrick describes growing up in this environment. It was an ordinary life in an extraordinary setting. His astronaut dad had a glamorous, yet dangerous career. Patrick shared his father’s excitement over his father’s first assigned mission, 41-D, telling how he helped design that mission’s patch. Patrick also describes his fear during the launch abort of his father’s first flight. It was unclear whether the Shuttle might blow up on the launchpad. He also relates the thrill of having his father in space.

The book focuses on growing up. Patrick lovingly describes his family, a twin and younger sister and parents who loved each other and their children. He recounts adventures with his grandparents and his hobbies and interests. He shared a love of flying with his father, describing learning to fly at his father’s side.

He also talks about going to an industrial-sized high school filled with overachievers. While describing himself as a nerd, he thrived, becoming part of the basketball team, the school’s first male cheerleader, and its class president. He describes the aftermath of the Challenger accident, which killed parents of several classmates.

Occasionally raunchy (any honest memoir of a teen-aged boy would be) but never past PG-13,  “The Father, Son, and Holy Shuttle” charms. It recaptures the thrill of coming of age as part of an adventure. Patrick Mullane describes a more innocent time, when boys could simultaneously build models, love flying and chase girls.