According to Cathy Young, writing for Arc Digital, the “Battle of Two Plus Two” started out as a meme mocking social justice warriors. Back in June, James Lindsay, co-author of Cynical Theories: How Activist Scholarship Made Everything about Race, Gender, and Identity―and Why This Harms Everybody, a new book with possibly the longest subtitle ever, posted a series of graphics that he called Woke Minis, including: 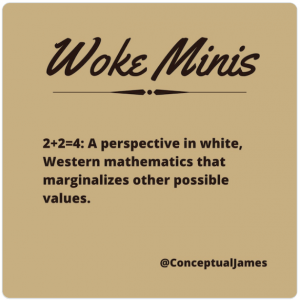 This was retweeted this to Nicole Hanna-Jones of Project 1619 fame, who fired back with the message:

Using Arabic numerals to try to make a point about white, Western superiority is just so damn classic. 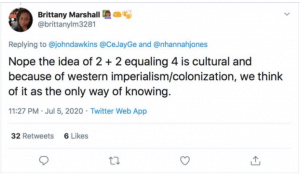 With the battle lines drawn, the fight was on. A call went out to SJWs everywhere asking for examples in which two plus two do not equal four. Responses ranging from the clever to the ridiculous flooded in. Techniques fell into two categories:

Changing the base, however, doesn’t change the mathematics, only the way in which the same values are represented.

Word games can be creative and sometimes amusing, but they rely on the sleight-of-hand trick of eliminating abstraction (two anythings plus two anythings equals four anythings), which eliminates mathematics altogether, replacing it with meaningless nonsense (two horses plus two horses equals sixteen hooves).

Young criticizes both sides for their angry, over-the-top rhetoric but concludes that it’s the Left that’s doing real damage:

[T]he “pro-SJW” camp includes people who are doing real harm to education, who traffic in provocative but empty sound bites like “mathematics operates as whiteness” and seem far more occupied with vague questions like “Can mathematics be antiracist?” than with the actual teaching of math. It also includes well-intentioned progressives who either genuinely don’t see how toxic this stuff is, or pretend not to understand.

This is not about intellectual exercises that yield “2+2=5.” It’s about an ideology that treats the math classroom as a place of oppression and racial division, and insinuates that the teacher who decides whether an answer is right or wrong has unjust power: An ideology which, under guise of anti-oppression advocacy, tells black and Latino kids that math as we know it is not for them.