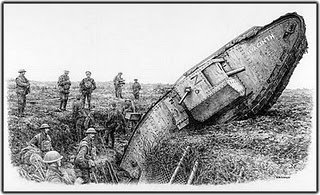 I don’t think there is a more widely believed proposition in the defense establishment and amongst laymen too, than that gearing our military for future asymmetrical warfare, and thus away from conventional armed forces…is the way of the future. I disagree strongly, and not just because I’m a tank guy. In any discussion about military […]

There are 25 comments.
But you can't read them because you're not signed in!