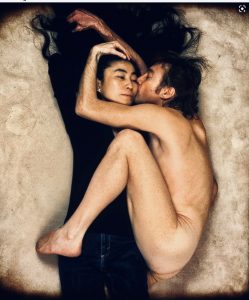 I lost this post in the ether for awhile. I’m hoping it goes back to the Main Feed where it was when it disappeared.  But it’s probably going back to the Members’ Feed. If you’ve already seen it, just skip over it. Sorry.

I will be discussing only the lyrics, so if you want to hear the melody as well, the link following this paragraph will take you straight to YouTube. There you’ll find Lennon singing Imagine (and chewing gum while he sings), accompanied by his partner in countercultural amusements, Yoko Ono, who is beating on a drum.

Imagine there’s no heaven
It’s easy if you try
No hell below us
Above us only sky
Imagine all the people living for today.

Imagine there’s no countries
It isn’t hard to do
Nothing to kill or die for
And no religion too
Imagine all the people living in peace.

You may say I’m a dreamer
But I’m not the only one
I hope some day you’ll join us
And the world will be as one.

Imagine no possessions
I wonder if you can
No need for greed or hunger
A brotherhood of man
Imagine all the people sharing all the world.

You may say I’m a dreamer
But I’m not the only one
I hope some day you’ll join us
And the world will be as one.

In the past 50 or so years since its release, Imagine has become an anthem for people with an above-average capacity for, oh, feeling things and stuff. Just last March, Gal Gadot (Wonder Woman) was feeling a bit peckish and cooped up because of coronavirus restrictions, so she called on her celebrity friends to help her sing Imagine. Zoom or some such app allows each celebrity to stand in his or her living room and sing a line or two from Imagine.

What sounds perfectly dreadful is actually mildly amusing. There is a curious pleasure in listening to tuneless voices trying to carry a tune — and clueless minds suggesting that Communism will fix all of mankind’s ills. (Lennon once called Imagine “virtually the Communist Manifesto.”)

In Imagine, Lennon suggests that if our imaginations were as finely developed as his, we would be able to let go of our emotional attachment to our religion, our citizenships, and our property. When we do that, Lennon says, there will be no more wars, no more greed, no more hunger, and the earth will be awash with peace and understanding. Hell, yeah!

Let’s imagine, then, what we would have to do to create a world without religion. First, we would have to try to erase the religious past by censoring the writings of Isaiah, Jesus, and Gandhi. Then we would have to burn all copies of Paradise Lost, the Divine Comedy, A Christmas Carol, and a few million other works in which religion plays a role.

We would also need to repurpose Chartres Cathedral and the thousands of other cathedrals, synagogues, and mosques around the world into low-cost housing, indoor soccer arenas, and soup kitchens (for the out-of-work priests, ministers, youth directors, choir leaders, Hindu priests, and Imams). 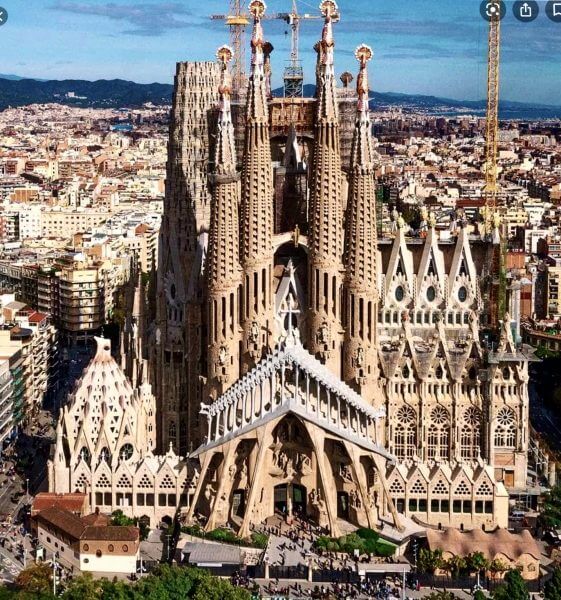 Since the Sagrada Familia Cathedral in Barcelona, pictured above, is not much good for anything other than a place of worship, we would have to dismantle it piece by piece. Architects, sculptors, and stonemasons have been building the Sagrada Familia for the past 140 years (and still have six years to go), so it would take, oh, about 20 years to dismantle it. But we could use the same stonemasons who built the cathedral to reverse engineer their work to take it apart. That would destroy one of the world’s great works of art, of course, to the detriment of hundreds of generations to come. But if the whole world will live in peace if we erase religion from our consciousness, I guess it’s worth it. The world will live in peace, won’t it?

We would also have to make some minor adjustments if we wanted to build a world without national borders, though it might not be as easy as it seems. There probably would be a few million troublemakers who would resist having their national borders erased, so we would just have to shoot them. Sometimes the easiest solution is the best.

In all this, Lennon matches his puny individual intelligence against the accumulated wisdom of the race, who have declared, by their actions, that religions and states are vitally important to the functioning of human society. I’ll have to admit that the man has a serious amount of chutzpah.

When I first heard Imagine in 1971, I was quite taken with Lennon’s idea that if we didn’t own things, we wouldn’t have “greed or hunger.” Imagine! No one owns anything! Everyone owns everything. What a concept! I wanted to be in the vanguard of this awesome idea, so I drove to Lennon’s fancy-schmancy apartment in New York and knocked on his door. When Lennon opened the door, I said “Big fan” and brushed right past him and Yoko Ono into our tastefully decorated apartment. John asked me what the hell I thought I was doing. I told him I was staying overnight and I’d appreciate a couple of our eggs in the morning. John told me to get out.

But John, I asked plaintively, what about your lyrics? You told us to “imagine no possessions.” John, I get it. It’s all about the brotherhood of man, just as you say. No greed or hunger. I imagined it all, just as you asked, and it was a beautiful thing.

He told me he was lying about those stupid ideas because he knew how naive and ignorant his fans were — and there were royalties to be made off them.

That made me so angry that I blurted out that I was now taking Paul’s side in their dispute and that Yoko’s art sucked big time. Yoko might have attacked me, but she had returned to her latest art project, a glass hammer lying atop an artfully arranged pile of jockey straps. Quite fetching, I thought, and tres provoking.

I didn’t have time to tell her that, though, because John was shoving me out of our apartment. Before I could turn, he had slammed the door and was locking it up tight, as if that apartment was his own and not mankind’s.