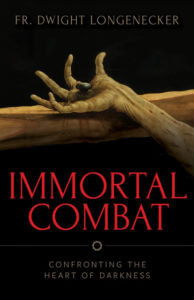 Fr. Dwight Longenecker dated the Introduction to his book, Immortal Combat: Confronting the Heart of Darkness, October 31, 2019. Was he divinely inspired, prophetic, or did he just have a foretaste of the societal crisis playing out in 2020 as indicated by the irrational hatred of President Trump and the bad behaviors of actors both Left and Right resulting from it?

Whatever the case, Immortal Combat is the best explanation for the position we find ourselves in I’ve read to date. As Fr. Longenecker says in his critique of therapeutic Christianity, “From the beginning to the end of time, the heart of the old, old story is not comfort, but conflict.” He then proceeds to engage our imaginations to understand spiritual warfare using the Bible, Greek mythology, The Lord and of the Rings, and other popular culture references. Even Fluffy — Harry Potter’s three-headed Cerberus in The Sorcerer’s Stone — merits a mention. He says,

We must go into those swamps and caves, for if Christianity is true, then it is the most astounding and revolutionary message ever to take humanity by the scruff of the neck and give it a good shake.

It is desperately important in our age to speak in these terms because our moral imagination, on the one hand, is weak, pale, and sickly, while ironically, in the realm of popular culture, the mythical imagination is healthier than ever. The academic world is a dry husk of learned articles filled with jargon and footnotes, while in the world of movies, television, gaming, and fantasy literature, the imagination roars and soars.

We must, therefore, use the imagination to dive like a spelunker into the depths of the underworld, then surface spluttering with joy, clutching the pearl of great price — which is to truly grasp the mysterious meaning of Christ’s sacrifice.

You might think the obvious place to start exploring the conflict between good and evil would be in the Garden with The Fall of Adam and Eve. But, Fr. Longenecker reminds us the story of Lucifer and his rebellion predates humanity. He says the Bible itself is a “chronicle of war. It is the record of brutal, seemingly endless cosmic combat taking place in the gritty reality of human history.” He reminds us of the warriors’ stories told there: Abraham, Moses, Joshua, Jael, Samson, Deborah, Gideon, Jephthah, Saul, David, and Elijah. . .

But, immortal combat didn’t end there either. It didn’t even end with Christ’s victory for those of us inhabiting Satan’s domain here on earth. Even “the history of our religion is one of war:” the Crusades, the Abligensian purges, the Thirty Years’ War, the battles of Lepanto and Vienna, the brutalization and murder of martyrs and suspected martyrs. Fr. Longenecker doesn’t let anyone off the hook; in fact, he reserves his harshest critique for the religious who serve at the command of the Father of Lies.

As for Jesus, he was no pacifist: “He recognized immediately who His real enemies were and called them out as a brood of vipers, hypocrites, sons of Satan, liars, and murderers. He said clearly that He did not come to bring peace but a sword, that he would baptize with fire, and following Him would mean separation from wife and children, mothers and fathers. To join Him is to join the forces of light against the powers of darkness.” And no saint ever attained heroic virtue except by fighting the good fight. Even the Little Flower said on her deathbed, “I will die with my weapons in my hand!”

If you’re convinced we’re engaged in “total war,” Fr. Longenecker helps us to get to know our enemy, and he does so by describing the Sin of the World that Jesus overcomes. He begins with the Minotaur and the Labyrinth. “He has the virile power of the bull combined with the intelligence and pride of man. He blends the brute strength and malice of the bull with the cunning deception of a cruel and violent man. At once stubborn and aggressive, he is at the same time shrewd and brutally handsome. Most intriguing of all, Asterion the Minotaur is hidden in the dark. [emphasis mine]

This is key to understanding the Sin of the World (fallen human nature): we don’t see it in ourselves. We think we’re the hero, Theseus, sent in to rescue the innocents sacrificed to Asterion, but in actuality, we are the Minotaur lurking in the labyrinth with murderous intent. Do you doubt it? Just wait, there’s more.

Next Fr. L takes on the Dragon in the Garden. He heard from an exorcist, “A real exorcism . . is a knock-down, bare-knuckle, snarling, hand-to-hand combat with the devil. You fight amidst the stench of hell, and the worst of all is the fact that you lose track of where you are. You seem to be in a wilderness with no points of reference. There is no logic or reasoning. Nothing can be predicted and planned. You’re wrestling on quicksand; everything slips and slides. There is no foothold. It is like grappling with an octopus in oil in the dark.”

I wrote in the margin next to this paragraph, “Critical Theory.” Sounds like it, doesn’t it? No logic, no reason, disorienting in the extreme. I have said before that confronting a leftist with the truth is like having hold of an octopoidal creature that squirms and flails until it escapes. “There is no truth in him.” It’s horrifying.

We always have to remember the devil is a liar, first, foremost, and forever. “His realm is chaos and destruction.” Does that sound like 2020 much?

Fr. L gives us a new way of understanding Original Sin. We often think it is Pride or disobedience, which it is. But, it comes because God has given us a share in His power — the power to choose. He values our freedom to love so highly that he gives us the freedom (and the power) to sin. And the fallout from that power of choice is eternal. It was Adam and Eve’s free will that made them believe they could be “as gods.” To not just know what is good and evil, but to decide for themselves!

“Embedded in this power to choose is a little red spark called ‘desire.’ . . . Desire is the engine of choice.” And desire is the wrench the devil throws into the works. He corrupts our innocent desire for the good, the true, and the beautiful into something selfish. Something covetous. Something murderous. God becomes our rival and we desire to displace him. This longing to be our own gods (Fr. L calls it “imitation desire”) is the murderous impulse we hide from ourselves. As T.S. Eliot said, “Humankind cannot bear very much reality.”

Which brings us to Cerberus, the three-headed Hound of Hell. Fr. L describes the three heads of Cerberus as representing power, pride, and prejudice. We’ve seen how the corruption of desire leads to poor uses of our power to choose and that our being “as gods” convinces us our choices are justified, but what do we mean by “pride?”

Fr. L says pride is the “total conviction I am right.” And here I want to segue into a personal story about the importance of self-doubt.

My sister, Trink, and I are separated by fifteen years and we’ve lived over a thousand miles apart for most of my adult life. But, we’ve developed a close relationship by phone, many lengthy phone conversations. Probably twenty years ago, she and I were having a discussion about society or politics or something (I don’t remember the specifics), and she asked me the question, “So you believe in social engineering?” It was a small thing. About the size of a mustard seed? But, it got me thinking — “no, actually, I don’t believe in social engineering” — and doubting my long-held lefty, atheist convictions. The simple question had to come from someone I trusted and who I knew loves me, and it set my feet on the path to political and religious conversion some years later. Keep this story in mind when I get around to part three about how to engage in this immortal combat. Hint: it’s going to depend on the imitation of Christ.

Back to Fr. L: “Pride is the total, complete, foundational assumption, before all else and above all else, that I am right, that my choices are right [after all, why would I choose to be wrong?], that my beliefs are right, that my decisions are right, that everything I do is right.” And it is the hiddenness of this abuse of power and resultant pride that leads to the third head of Cerberus: prejudice.

Now we’ve come to the heart of the current conflict in our society. Lacking all humility, we hate each other for our differences. And, I would say, the worst examples of the unleashing of Cerberus are out in the streets causing mayhem and murder. They are justified in their incivility because they are right (in their own minds), and if they are righteous (they decide what’s right and wrong, remember) and we don’t agree to defunding the police, or teaching the 1619 Project as authentic history to our elementary students, or kneeling for the anthem, or affirmative action, or universal healthcare, or, or, or. . . we are evil, and we deserve what’s coming to us. After all, you have to break a few eggs. . .

In a healthier society, “we soon learn that to live together with others, power, pride, and prejudice must be suppressed. We have to keep Cerberus on a leash. Family, society, education, and religion all provide the leash we need [and we see now the results of degraded family, society, education, religion. . .]. We are taught self-control. We learn that it is unacceptable to exercise raw, selfish power. We come to understand that we cannot assert our instinct to be “right” all the time.”

But, our fallen nature, and the devil’s influence are so strong, we practice self-deception and dress up our aims as virtuous — Black Lives Matter! Anti-facism!! Anti-racism!!! When in reality, we manipulate others to get our way, at best, and, at worst, we form mobs and riot in the streets.

And it’s not just the Left, but the religious Right does this, too: “In fact, too often we fall into the trap of asserting our power by using religion to control others. With endless rules and regulations and a hefty dose of guilt we manipulate and control. With “scholastic” debates about points of doctrine and morality, we assert our pride and prove ourselves not only right but righteous. We use religion to bolster our prejudices rather than challenge them. Furthermore, we do all this believing that God Himself approves.”

There’s so much more to this little book (144 pages), but it seems this is enough for now. Go buy a copy and read it, or you’ll have to wait for me to get around to Parts Two and Three. And who knows how long that will take! 2020 will not wait. It’s relentless.