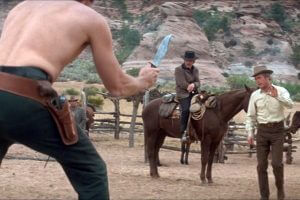 Many years ago I watched Butch Cassidy and the Sundance Kid. I remember a scene where Paul Newman, as Butch, faced down a hulk of a man who wanted a knife fight. Butch said there had to be rules. “Rules? In a knife fight?” The other man was incredulous.

At which point Butch kicked him in that tenderest of places and said “Okay, you don’t want rules, no rules.” He convinced the man he was wrong in a painful lesson regarding rules. I often think about that because rules are a good thing. Which leads me to my topic today, which concerns an attorney in Oregon arrested at the federal courthouse riots and who claimed to be sexually assaulted.

Here’s the story about the lawyer. Arrested for misdemeanor assault on a federal officer, and failure to obey a lawful order, Jennifer Kristiansen will get her day in court. She is, of course, presumed innocent until proved guilty. But some things should be obvious upfront. Lawyers know and understand their duty to obey a lawful order by a law enforcement officer. They know it’s a crime to disobey. They also understand what an assault is, and that there are penalties for assault on a federal officer. As lawyers, they know that they are required to tell the truth, even when it hurts their case, and that if they choose to speak, they must speak truthfully. They also know there is a rule to prohibits statements that are intended to influence a jury before trial.

The lawyer claims she was in fear of being raped (baloney!) and that the arresting officer “pushe[d] me up against the wall, facing the wall, and use[d] his left hand to cup my right breast,” She then said he used “his right hand to flip up my skirt and grab my right butt cheek.” If you’re following along, apparently, in violation of every tenet regarding searching a prisoner, this officer put himself in physical danger of being bitten or kicked by reaching all the way around her chest. No competent DHS agent would do that. More importantly, given her booking photo, I doubt there was anything about a screaming woman that aroused this officer, who likely just wanted to go home that night without eye damage.

Keep in mind, these were not folks carrying signs and singing hymns. They were people encouraging and participating in violence against federal officers. They set fires. They smashed windows. They even went after the mayor when that fool showed up to offer them support. In the article the woman confesses to her assault on the officer noting that she pushed herself between a federal officer and another protester, essentially asking to be arrested. She got what she asked for. You cannot push a federal officer while he is engaged with another person. That’s assault. She claims she was bruised by rough treatment. I would note that it takes two to tango, and the video demonstrates her actions were not passive resistance. As author Kurt Schlichter has pointed out numerous times, this is more of an information operation than a kinetic one. The Antifa crowd seeks an overreaction and they are not getting one. So they invent one.

Let’s unpack her statement about being groped, however. Normally, when a woman is detained for some suspected criminal act, a female officer is requested to do the physical search. That’s because it is just the right thing to do, respect a person’s bodily privacy by taking away any claim that some sexual component to the search might have existed. But the middle of a riot, where officers are attacked by three and four people when they try to arrest someone, it is not a time for niceties. The fact that officers had suffered laser-based eye damage and injuries from other impact weapons during this 50-plus-day fiasco certainly justifies a quick, if cursory search to locate weapons that could be concealed. And where would a woman hide things she didn’t want to be discovered? Think about that and you’ll have the answer to the cupping and groping allegations. What the woman suffered was not a groping. It was not a sexual assault. She got what every other arrested person gets: a physical search of her person for weapons. And with damned good reason, too.

If she doesn’t plead guilty there is a fair chance she will make those sexual assault claims in court. That would be decidedly unwise.

A lawyer shall not:

(d) engage in conduct intended to disrupt a tribunal; or

Call me crazy, but I see efforts to burn and destroy a federal courthouse to be efforts that are intended to disrupt a tribunal. If only there were an individual willing to go research this lawyer, learn her bar number, and file the appropriate request of the disciplinary counsel to pursue an investigation. Kristiansen, who should know better, has admitted to the press (a) that she was there; (b) that she was participating in the riot; and (c) that her intent was to get between an officer and a woman he was trying to encourage to disperse. And while her statements to the press would seem to indicate that they were walking backward slowly, that isn’t what she was ordered to do. She was ordered to leave the area and it took tear gas to get compliance. The fact that she brought a respirator to avoid the tear gas and pepper spray is likewise indicative of criminal intent. In other words, she planned to engage in conduct that she knew would result in federal officers using chemical agents.

(a) It is professional misconduct for a lawyer to:

(1) violate the Rules of Professional Conduct, knowingly assist or induce another to do so, or do so through the acts of another;

(2) commit a criminal act that reflects adversely on the lawyer’s honesty, trustworthiness or fitness as a lawyer in other respects;

(3) engage in conduct involving dishonesty, fraud, deceit or misrepresentation that reflects adversely on the lawyer’s fitness to practice law;

(4) engage in conduct that is prejudicial to the administration of justice; or…

It would appear that Kristiansen has scored a quadfecta. By engaging in conduct designed to disrupt a tribunal she has clearly violated the rules of professional misconduct. So (a)(1) seems satisified by her participating in the riot which for nights has attempted to burn down the courthouse. She wasn’t out there trying to argue against it (what an actual concerned attorney might do).

Lawyers are officers of the court. They cannot disobey an order by a law enforcement officer or court marshal while practicing law. If this woman were to say and do the things she did on this night or act in that manner in a federal courtroom she knows well she’d get a disciplinary charge out of it. The fact that she was arrested for assault on a federal officer should result in her being sanctioned by the Bar if she is convicted. As a lawyer, she could potentially work out a diversion agreement, but if I were the US Attorney I would make an example out of her. She could plead guilty, or she could go to trial. If she went to trial I would push for a maximum penalty (three years in prison and a $5,000 fine). It would be federal time, so she would do all but six months of it in a prison. And since she’s attacking a federal courthouse, a place where federal judges should be able to work in peace, it is doubtful in the extreme that she would get a warm fuzzy feeling from the judge who likely now has to ride to work in an armored car.

Equally troubling, however, is what I believe to be a false statement – and I believe it’s false since every DHS officer in Oregon knows his actions are being filmed by 900 morons with cell phones (view the video in the linked article). I believe it is false that she was “groped” by the federal officers. She knows she was searched. If she were being honest, she would simply admit it. But she couldn’t get media sympathy that way, so a search becomes a defacto sexual assault. I’m sorry, but I just don’t buy it. The video posted by Heavy shows nothing of the kind. It shows her being hauled away by two officers and her resisting. It’s a shame they didn’t charge her for resisting. If video later documents a search and not a sexual assault, she could certainly be liable under subsection 3, above.

Finally, a lawyer trying to tear down a federal courthouse or assisting those who do is likely to be defined as conduct prejudicial to the administration of justice. It is hard to administer justice in a courthouse that is nothing but glowing embers.

Citizens can petition the Oregon bar and its disciplinary authorities for an investigation. Perhaps one might occur, and sanctions might ensue. Perhaps it’s time for the cancel culture tactics of the left to come home to roost.

Sometimes people need to be taught really tough lessons in order to appreciate the freedom they have and the jobs they went to school for seven years to get.