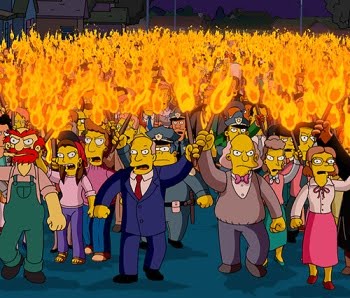 Last night I saw one of my exes post to her wall, the same familiar screed. “Oh my god. My governor is opening up the state of Oregon. Think of all the people who are going to die.”

I checked out the state of Oregon, it has a population of 4.218 million. It has had a grand total of 140 deaths. Over two-thirds of them are over the age of 65 and every single death had an underlying condition according to the stats I can find.

Sorry but you and your husband, a pair of 30-somethings who do kickboxing for a hobby, are going to be fine. You’re not that special.

Looking at these “continue the shutdown” people, they are the fearful peasants in the Frankenstein story. They are the people who burnt the witches. They are Christian apocalypse people. You know, the people carrying signs saying “the end is nigh.” Their lives are so meaningless they have to take strength that they are the chosen people living out the end times in preparation for the final battle with the Antichrist.

I am here to tell you, that the world is going on and passing you by. You’re not that special. You’re not going to die of COVID-19. However, people are dying of depression, people are going bankrupt, and are going to become poorer. We will see real inflation for the first time in many of our lives. Millions of people are destined to now die of tuberculosis in poor countries. The supply chain is disrupted and there will be shortages. Rich corporations are going to become richer and small businesses will go bankrupt. Alcoholism is surging as well as child abuse. Including molestation.

A friend of mine is a single mother. Her six-year-old son is now living alone in the house and is terrified to go outside. He hasn’t seen another child in two months. He is living in fear because of your selfishness. Frankly, that’s child abuse. You are allowing your fear to ruin other people’s lives so you can feel special about yourself.

To all these people I have one thing to tell you: grow!