Those were the last words of James Maitland Stewart, who was born in Indiana PA on May 20, 1908. A shy young man, he was fascinated by early airplanes and considered signing up for the military, but was discouraged by his father, who urged him to attend college instead. At Princeton (BA–Architecture–1929), the young James Stewart discovered acting, and one of his careers was set. And this time, his father couldn’t dissuade him from his chosen path:

Dad was upset. My father didn’t like it at all–till the day he died, he didn’t like it…he kept shaking his head, saying ‘No Stewart has ever gone into show business!'”

After a slow start, Stewart achieved considerable success in Hollywood in the 30s and early 40s, doing well enough to buy himself a Stinson 105, a three-seat monoplane, and logging 400 hours of time as a pilot before the US entered the War. He was drafted into the Army after Pearl Harbor but was rejected as underweight. After some lifestyle and dietary modifications (mostly consisting of spaghetti, steaks, and milkshakes), and a rigorous exercise program, he enlisted and was accepted into, the Army Air Force where his interest in aviation and the fact that he was already an experienced pilot accelerated his progress towards earning his pilot’s wings. (“Every time you hear a bell ring, a pilot gets his wings.” I think that how it goes.)

He spent some time as a flight instructor at the Air Force training schools in Albuquerque NM, and Boise ID, and began flying combat missions over Europe in 1943. At the end of his war, a grey-haired Colonel Stewart had flown 20 combat missions, had directed hundreds more, and had made a name for himself as an officer who cared deeply about his men and who wouldn’t ask them to do anything he wasn’t prepared to do himself.

aboard the liner Queen Elizabeth. Pre­dictably, he waited at the gangplank until all of his men had disembarked before coming ashore. Asked about his service in Europe, he commented, “I had some close calls—the whole war was a close call.” When he returned to Hollywood, he refused a lavish welcome home party, saying, “Thousands of men in uniform did far more meaningful things.” (from Mr. Stewart Goes to War, originally published in Aviation History Magazine) 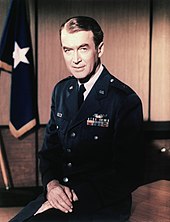 He remained in the Reserves for another twenty-three years, ending his military career as a Brigadier General, and for the rest of his film career insisted that neither the films themselves nor the studios that produced them, could use his war record to promote them in any way. He also refused to speak publicly about his experiences himself, and turned down roles which depicted him as a member of the military, saying “They’re just hardly ever the way it really is.” In 1966, not long before he retired from the Air Force, he flew his last combat mission over Vietnam, with the crew of a B-52 Stratofortress. The run near Saigon was quite straightforward; however the landing was anything but, and the pilot had visions of newspaper headlines screaming “Jimmy Stewart Killed in Bomber Accident with Bob Amos Piloting!” Fortunately, the plane landed successfully at Andersen AFB in Guam, all was well, and Bob Amos was able to dine out on the story for decades.

As were so many veterans of World War II, Stewart was modest about his achievements and preferred not to talk about his exploits or his service. Much has been made of whether he suffered from what we now call PTSD, although some of the facts presented in, and many conclusions of, the biography central to that theory have been called into question. Of course, the war changed him. But he shouldered his burdens with dignity and grace, and he soldiered quietly on, as have so many others before and since.

Even as his friends had given up on the idea that he’d ever get married (gossip maven Hedda Hopper called him the “Great American Bachelor”), Stewart had a series of discreet romantic attachments to several Hollywood leading ladies during the 30s and 40s, but it wasn’t until he met Gloria Hatrick McLean at a party in 1947 that he was truly and irrevocably smitten. (It must have taken her rather longer to reach that state; probably because he was a bit drunk the first time they met, and apparently neither she nor her dog, was all that favorably impressed.)

“The romance very nearly broke up before it got started,” Gloria later recalled. “At the time, I had a beautiful big German police dog named Bellow. When Jimmy saw me to the door [that first night], Bellow took one look at the strange man and went for his jugular.” [Jimmy said] “I realized that first I had to woo the dog. I bought him steaks at Chasen’s. I prattled baby talk to him. Praised him. It got to be pretty humiliating, but we finally got to be friends. I was free to court Gloria!”

“I could tell right off that she was a thoroughbred. For me it had been love at first sight. She was the kind of a girl I had always dreamed of. The kind you associate with open country, cooking stew, and not fainting because it was made of cut-up squirrels. She’d look at home on a sailboat or a raft; in a graceful swing from a tree branch into the swimming pool.”–Jimmy Stewart: A Biography

How very Jimmy Stewart. Clearly, he’d fallen once, and fallen hard, for the lady.

So, he persisted, and in 1949 he popped the question. She said yes, and they were married that August. Stewart adopted Gloria’s two sons from her previous marriage, and he and Gloria had two daughters together. His adopted son Ronald was killed at the age of 24 while serving as a USMC Lieutenant in Vietnam, one year after Stewart’s own flight over that country.

In 1951, Jimmy and Gloria bought their dream home in Beverly Hills (no word on whether the knob on the newel post came off in their hands every time they went up and down the stairs). It was the only home they bought together, and they were still living there 43 years later when Gloria Stewart died from lung cancer.

Stewart never recovered from his wife’s death, becoming depressed and reclusive. In poor health the last two years of his life, he finally succumbed to a series of medical events stemming from long-standing cardiac problems.

Jimmy Stewart, a loving husband, devoted father, decorated military veteran, winner of two Academy Awards, two Golden Globe Awards, and dozens of other honorary and lifetime achievement awards went to be with his Gloria on July 2, 1997.

“If Bess and I had a son, we’d want him to be just like Jimmy Stewart.”–Harry Truman

Published in General
Tags: 2020 May Quote of the Day, Jimmy Stewart, Manly Virtue