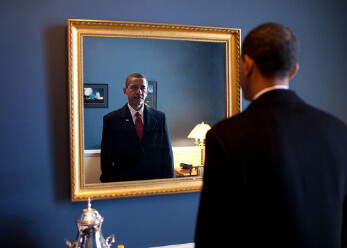 Here is a statistic that will warm the cockles of your heart. Public Policy Polling (PPP), a Democratic outfit, has found in its most recent poll that African-Americans in North Carolina are drifting towards Mitt Romney. In 2008, Barack Obama received ninety-five percent of the black vote in that state, and John McCain garnered a measly five percent. In this poll, Obama gets seventy-six percent and Romney gets twenty percent.

This may, of course, be a fluke, as some of the folks at PPP suspect. Or it may have to do with the state of the economy, as Glenn Reynolds intimates. I am inclined, however, to suspect the unthinkable – that it has to do with Obama’s embrace of gay marriage in the immediate aftermath of the referendum on the subject held in – yes, you guessed it!—North Carolina.

Barack Obama is part African and part Caucasian. But he is not African-American in the ordinary sense in which the category is used. He is not descended from those who were slaves on this continent. Moreover, he was not brought up within the African-American cultural milieu. My suspicion is that his hold on the African-American vote is quite tenuous. He has more in common culturally with ivy-league-educated folks like yours truly than he does with evangelical Christians of color, and they sense this fact. He may be wrong in supposing that he can fully embrace the agenda of our intellectual elite and still mesmerize African-American voters.

If so, in a completely counter-intuitive fashion, this just might be the year in which, for the first time in living memory, the Republicans begin to garner a respectable share of the African-American vote. Wouldn’t that be perplexing?