This post isn’t an update on the final days of Biden vs. Sanders and the Democrat primary nomination process, one which might be settled on Sunday night (if the proposed meet-up actually happens) in one of those ‘push-up contests’ Joe Biden is so fond of taunting his opponents with. (For some reason, unbidden and unwelcome images of septuagenarian Jack Palance at the 1992 Oscars keep springing to mind.) Nor is it a review of a recent movie, one which I did see, and which I enjoyed. I wasn’t sure about it for the first ten minutes, which jumped around a lot and were talky and a bit confusing, but once it settled down I was quite entertained, and rather charmed by Daniel Craig’s Kentucky Fried Performance as Benoit Blanc, although Craig said he based what passes for his accent on Mississippi historian Shelby Foote’s narration of Ken Burns’s The Civil War.

No. This post is based on last weekend’s Wall Street Journal, in which the lead story in the “Off Duty” section was titled: “Why pay $24,000 For a Kitchen Knife?”

Why indeed? (The full story is behind the paywall, but don’t worry: I’ve got your back.)

The article focuses on the craftsmanship of bladesmith Bob Kramer, whose one-of-a-kind knives regularly auction between $25,000 and $30,000, and one of whose knives, from the estate of the late chef Anthony Bourdain, recently fetched a cool quarter-million. Kramer’s knives demonstrate, the article says, “the elevation of the kitchen knife from primal tool to functional art object,” a move that Peter Hertzmann attributes to the rise of the open kitchen–just as “people displayed their status . . . with carving knives,” now that the lowly kitchen knife is more visible, the purchase of kitchen knives has come to “revolve more around appearance and perceived intrinsic value, rather than function.”

Glory be. The older I get, the more I’m aware that there are some trends in life that have either passed so far above my head, or so far beneath my feet, that I’m blissfully oblivious of them. Demonstrating my “social status” to my dinner guests via the spectacular uniqueness and value of my carving knife, and acquiring outrageously expensive kitchen knives which I can display prominently as some of the very few objets d’art in my humble abode, are just two more to add to the list, I guess. 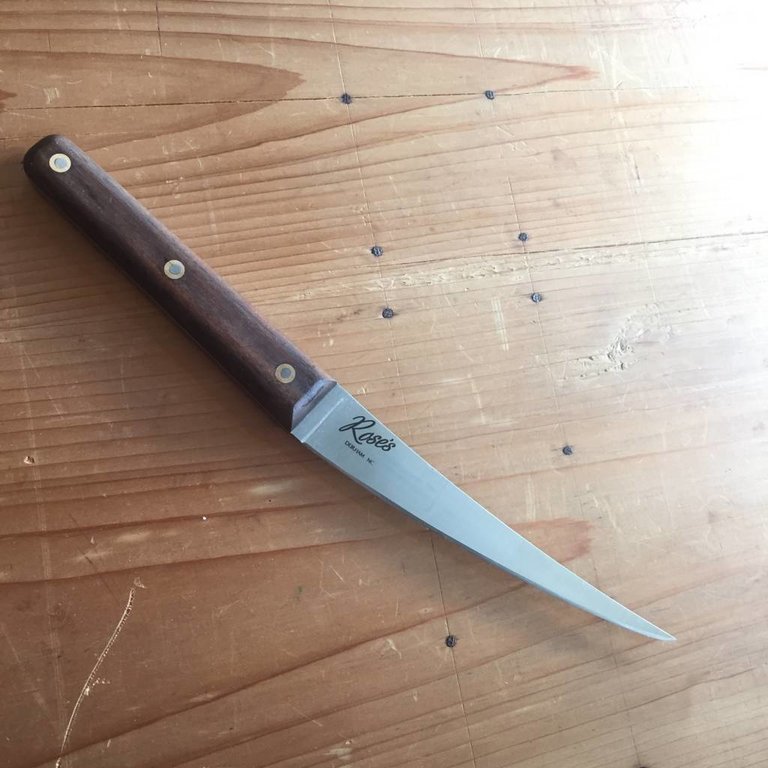 Once the article has described Kramer’s gorgeous oeuvre, it settles into a run-down of some more affordable (although still pretty pricey) alternatives. There’s a sweet little Silverthorn boning knife with a super-thin and flexible blade (left). It’s very reminiscent of the knives I used to filet fish with in the 1970s, which didn’t start out that way, but which ended up looking pretty much like that after we had worn down both the thickness and width of the blades over the years by sharpening them by hand on a piece of sandstone. They had wooden handles, carbon-steel blades, and could be had at the Fisherman’s Co-Op, next door to the wharf, for about $1.50 (Canadian). The one pictured is a steal at just $185.

Oh, here’s a lovely one: An Anger Knives Tunnel Mosaic Chef Knife for $1,850 (right). This one is the creation of self-taught Vermont bladesmith Nick Anger, It is quite beautiful, hand crafted from made-in-house mosaic carbon Damascus, with “razor sharp tip,” and a lovely handle composed of “black-dyed maple, spalted maple, and micarta.” This article from The Take Magazine, is a fascinating overview of Anger, his forge, and his process, and it includes several photos of his beautiful knives.

You can find the Tunnel Mosaic chef knife for sale on this website, but don’t get your hopes up; it’s unavailable at the moment.

Another chef knife; this one a little smaller, the Zwilling Kramer Euroline Damascus Chef (left). This one will lighten your wallet to the tune of $400, and boasts a super-wide blade for the large-knuckled. (I think that’s supposed to stop you bloodying your knuckles on the work surface, rather than being an invitation to hack yourself to bits.) The blade on this one, which is made by skilled Japanese artisans, delivers “scalpel-like sharpness,” in which the blade’s core is protected by a 100-layer chevron Damascus (there’s that word again) pattern, and a “stunning black linen Micarta** handle.

While researching this post, I learned that the term “Damascus steel” nowadays hearkens back to true “Damascus” steel, once the world standard of quality (my ancestors from Sheffield might disagree), and also describes a modern method of production. According to the Damascus Knife Guide:

Modern Damascus steel is made by either forge-welding different types of steel together before twisting and manipulating the metal, or by flattening out and then folding a single type of steel in order to produce layers in the metal. Both these techniques result in the wavy, ‘organic’ pattern that is typical of Damascus steel kitchen knives.

The technique used to make modern Damascus steel is primarily for aesthetic reasons; however, the folding and refolding process does have the benefit of evening out any natural impurities in the metal.

Techniques such as acid etching can also be used to emphasise the unique pattern created by this process.

A Damascus knife can easily be identified by the wavy pattern that runs throughout the length of the blade. I discovered, when examining my own kitchen knives, that I do have one Damascus knife! It’s a Miyabi 600D Fusion chef knife, and was a gift from my stepson Sam. I also have a set of Henkels, which I bought over time and individually–a large chef knife, a bread knife, a boning knife, a prep knife, and a couple of paring knives. In addition, I have several (really) cheap paring knives, and a serrated utility knife. I sharpen my knives with a steel, sometimes (for old times’ sake) with a stone, and sometimes with this odd-looking thing, (another gift from Sam), which works pretty well.

Would you ever pay $24,000 (or even just $1,850, or $400) for a kitchen knife? What knives have you found best suited to your culinary needs? Do you have a set from one manufacturer, or do you buy the best knife for the purpose? Are kitchen knives a “lifetime commitment” for you, or do you switch brands and try out new ones “as seen on TV!” Have you tried ceramic knives? (I haven’t.) If you have, do they work?

**Micarta, according to Wikipedia, is “a brand name for composites of linen, canvas, paper, fiberglass, carbon fiber or other fabric in a thermosetting plastic.” It’s a product that was introduced 1n 1910 by local industrialist George Westinghouse (local if you live near Pittsburgh, as I do), using phenolic resins developed by Leo Baekeland, the Belgian-born chemist who also invented Velox brand photographic paper and Bakelite.

PS: Yes, those are my knives in the photo at the beginning of this post. You can’t see them in the photo, but there’s a pair of kitchen scissors with a pretty interesting story hidden in the block too.