You’d need to live in a cave to have missed all the controversy about the Boy Scouts and the Girl Scouts. In past years, there have been plenty of criticisms in particular about Girl Scout cookies, calling it a racket, a scam, and big business. I was crestfallen as a young girl when it was time to sell cookies (we used to sell them door-to-door) and all the other girls had saturated the neighborhood before I even went out.

With all these negatives, the Girl Scouts, with their pledge to society and dedication to girlhood are inextricably linked to the cookies. (Our favorites are thin mints.) We buy them in February when the girls sell them with their moms in front of Publix. They work hard. So I was furious to find out that they had been ripped off by people using large counterfeit bills here in Florida. In my research, I discovered that this has happened in other states in the past few years, but to rip off the Girl Scouts–that’s the lowest:

Six troops in the Girl Scout Gulfcoast Florida council have been victimized in the scam, according to WTSP-Channel 10. Girls who sold the cookies outside stores such as Publix and Walmart were scammed out of about $650. In some cases, buyers used fake bills of large denominations to get real cash back in change.

I guess nothing is sacred. 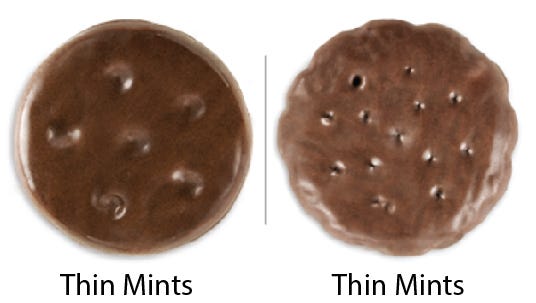