It was September 1978 and my then-girlfriend (and now wife of 39 years) and I were trying to find the cheapest way back to Paris from Athens.

In 1976 my girlfriend moved to Paris to work as an au pair and learn French, attending the Institute Catholique. I was able to take some time from working and visit her in 1977 and then, in May 1978, quit my job and went to Europe to join her in a tiny garrett room with a communal (and primitive) toilet down the hall. While she was working I’d wander around Paris (loving the city and getting annoyed at its inhabitants). Her employer gave her several weeks off and we traveled round Europe making our way eventually to Italy (often camping, sometimes staying in hostels, and occasionally finding a cheap hotel). From Florence we caught a train down the Adriatic coast to Brindisi where, upon disembarking, we were welcomed by heavily armed Italian soldiers who escorted us as we walked the mile or so to the city’s port to catch the ferry to Patras in Greece (this was at the height of the Red Brigades terror campaign which probably explains our escort – I don’t think we were suspects).

Not being able to afford a cabin we slept on the deck during the overnight trip, waking up early in the morning to see Corfu gliding by. Taking a train from Patras to Athens we stayed for about ten days (most of it with an old high school classmate of mine who was teaching at the American School), though before we found him we spent one night sleeping on a mattress on a fire escape at a crowded hostel. We hiked up the Acropolis at dawn where my girlfriend took this picture; back then there were no barriers and access was easy. 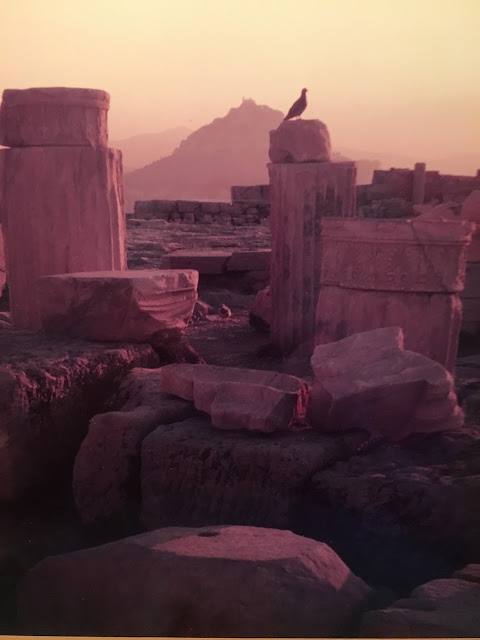 By late September, she needed to get back to her job in Paris and I needed to get back to the States and get a job as we were both almost out of funds. That’s when we selected our cheapest option – the Magic Bus (for the historic origin of the name, see this), which offered a 40-hour ride to Paris for about $48 in US currency. You can see below a flyer for the bus which I rediscovered when we were moving two years ago. This gives the route from London to Athens while we were taking it the other way but it gives you a flavor of the comforts of our journey. 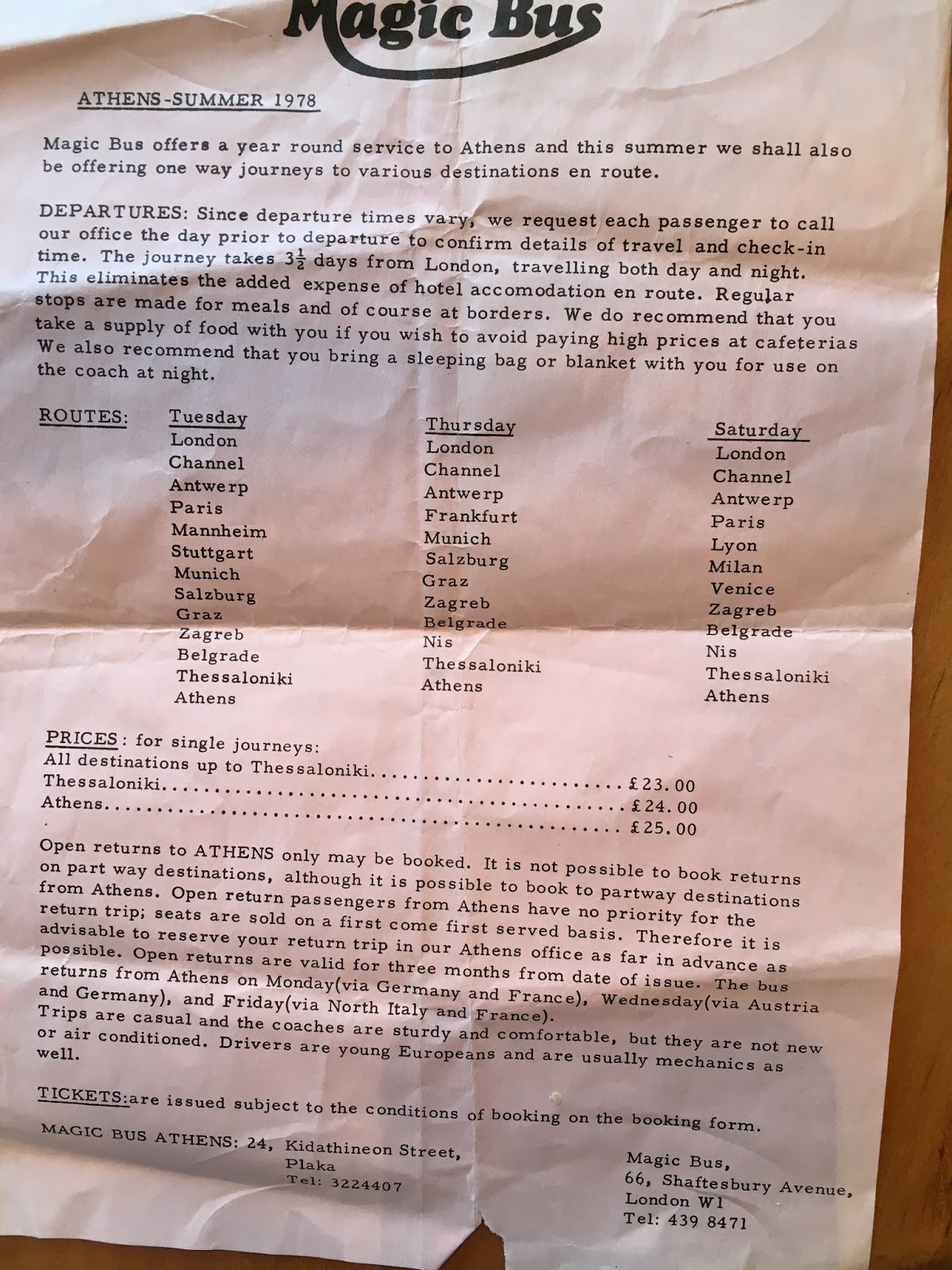 It took a bit of effort to find the offices of the Magic Bus. I came across this recollection from someone who rode the bus in 1975 and it matches up well with our memory:

You had to find a certain doorway in a side street off Syntagma Square, climb four flights of rickety stairs to a scruffy office where 1,700 drachmas changed hands. Your name was laboriously and inaccurately added to a passenger list and you were handed a scrap of paper which purported to be a ticket.

These were older non-air conditioned buses without restrooms. We would stop about every eight hours for a quick food (though most of us brought food since we couldn’t afford the highway cafeterias) and bathroom break (many of the male riders brought empty bottles and cans aboard to serve as relief containers, if you know what I mean). To save time, the two Greek bus drivers would switch off while the bus was moving. Most of the other riders were even scruffier than we but fortunately the bus was only about half full.

Leaving Athens, we drove north through the mountains reaching the Yugoslav border in the darkness where, since these were the Cold War days, we had a lengthy stop. Jackbooted border guards bordered the bus and went down the aisles demanding passports be shown, taking ours and those of the other couple of Americans on board. We sat for quite a while before they came back, returned the passports, and cleared the bus to continue.

(Magic Bus with typical passengers (not us!)) 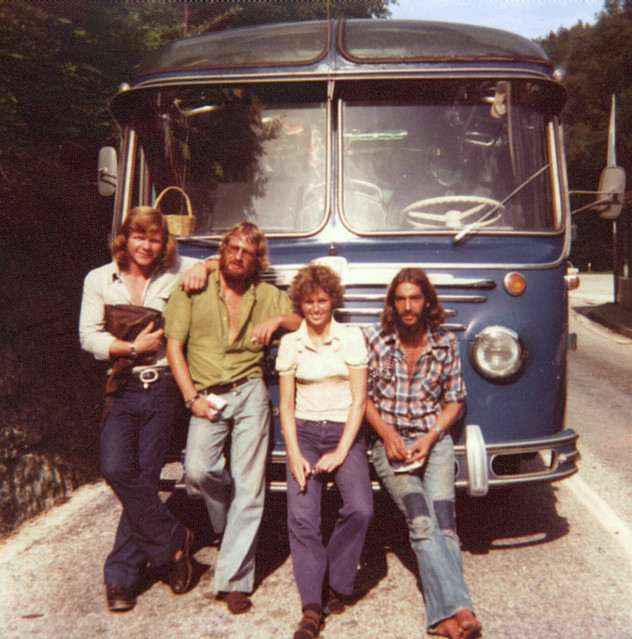 Most of the rest of our journey passed in an increasingly foggy blur as we became exhausted and enervated from hours of sitting. Initially, our seats were in the middle of the bus but the two obnoxious guys behind us who never stopped talking prompted us to get seats closer to the front, which allowed us a close view of the most memorable moment of the journey.

It was on a highway in France, somewhere between Lyon and Paris. A loud argument erupted between the two drivers – did I already mention they always switched while the bus was moving to save time? – what it was about we didn’t know since it was all in Greek. Things got more heated and finally the driver stood up to argue with the other guy – leaving no one at the wheel as we careened down the highway!  We all started frantically yelling prompting the driver to return to his seat so we survived to write this in 2019. The entire incident must have lasted only a few seconds but it seemed like minutes to us and we can still remember the moment we realized no one was in the driver’s seat.

But we can’t complain. We got back to Paris on time, on budget, and well served. As Pete Townshend wrote, “thank you driver[s] for getting us here.”